As more than one wit has quipped, dystopian novels like Brave New World and Nineteen Eighty-Four were not meant to be taken as instruction manuals. They were to remain in the fiction section, and not be reclassified as works of non-fiction. But in our increasingly bizarre PC world of radical gender benders and sexual anarchists, it seems that all the things warned about in these books are fast becoming reality.

The very things discussed in such a prophetic fashion in these books are now becoming the stuff of everyday life. It is getting to be very scary indeed. Consider just one ominous fictitious device found in Nineteen Eighty-Four: the telescreen. This was a combined television and security camera. Early on in the novel we learn about it:

Down in the street little eddies of wind were whirling dust and torn paper into spirals, and though the sun was shining and the sky a harsh blue, there seemed to be no colour in anything except the posters that were plastered everywhere. The black-mustachio’d face gazed down from every commanding corner. There was one on the house front immediately opposite. BIG BROTHER IS WATCHING YOU, the caption said, while the dark eyes looked deep into Winston’s own. Down at street level another poster, torn at one corner, flapped fitfully in the wind, alternately covering and uncovering the single word INGSOC. In the far distance a helicopter skimmed down between the roofs, overhead for an instant like a blue-bottle, and darted away again with a curving flight. It was the Police Patrol, snooping into people’s windows. The patrols did not matter, however. Only the Thought Police mattered.
Behind Winston’s back the voice from the telescreen was still babbling away about pig iron and the overfulfillment of the Ninth Three-Year Plan. The telescreen received and transmitted simultaneously. Any sound Winston made, above the level of a very low whisper, would be picked up by it; moreover, so long as he remained within the field of vision which the metal plaque commanded, he could be seen as well as heard. There was of course no way of knowing whether you were being watched at any given moment. How often, or on what system, the Thought Police plugged in on any individual wire was guesswork. It was even conceivable that they watched everybody all the time. But at any rate they could plug in your wire whenever they wanted to. You had to live – did live, from habit that became instinct – in the assumption that every sound you made was overheard, and, except in darkness, every movement scrutinized.

And later on we learn more about how sinister this device is:

It was terribly dangerous to let your thoughts wander when you were in any public place or within range of a telescreen. The smallest thing could give you away. A nervous tic, an unconscious look of anxiety, a habit of muttering to yourself – anything that carried with it the suggestion of abnormality, of having something to hide. In any case, to wear an improper expression on your face (to look incredulous when a victory was announced, for example) was itself a punishable offense. There was even a word for it in Newspeak: facecrime, it was called. 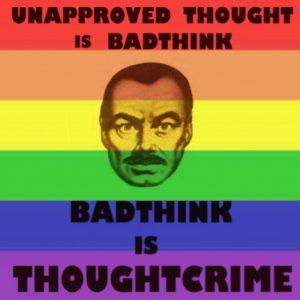 If some of these terms sound like common words and phrases today, it is because they are. Although this book was written back in 1949, today we routinely speak about hate crimes and the thought police. In the post-Christian West where political correctness has a deadly grip on so much and so many, and where we are told to tolerate everything and resist nothing, we see that which was depicted in these novels being played out before our very eyes.

We have to say the right things and think the right thoughts, or else the ever expanding State will take action. This has especially been the case with all things homosexual and transgender: dare to say a wrong word or think a wrong thought about such matters and you will be punished accordingly.

I have documented countless cases of this happening throughout the decadent, secular left. The most recent example of this fits right in with what Orwell and especially Huxley warned about. Indeed, you could splice this article into Orwell’s novel and it would fit in perfectly.

Consider this absolute shocker as found in The Australian a few days ago. The headline reads: “Push in schools to fight ‘modern’ homophobia”. The piece begins:

Educators are being urged to look out for a new form of “modern homophobia” — characterised by disinterest, disingenuous support or “sham tolerance” — as part of efforts to promote sexual diversity education in schools.
A guide prepared by the GALE Association — a global education alliance that counts several Australian academics, including Safe Schools founder Roz Ward among its membership — warns that in some countries, such as Australia, it is more common to encounter “modern homophobia” than “traditional homophobia” where same-sex-attracted people face open hostility and rejection. The document, which has been circulated in draft form ahead of its official release, presents as a playbook for LGBTI activists seeking to co-opt teachers, education officials and governments to implement policies around sexual diversity education in schools.
A push to broaden what it means to be homophobic is particularly relevant in Australia, where opponents to the Safe Schools program and to same-sex marriage have been tagged with the label. It is also likely to spark concern about the influence of special interest groups on education policies and school curriculums.
According to the GALE Association guide, “modern homophobics state they are not homophobic but they prefer their child not to be LGBTI and they prefer not to associate with LGBTI, especially when they do not conform to heteronormative standards”.
It cites the importance of “peer education” in generally supportive markets, where LGBTI advocacy groups conduct sessions for teachers on issues around supporting LGBTI students in schools.
“In this phase, peer educators will encounter more ‘modern’ homophobia and transphobia,” it says. “Modern homophobia and transphobia are more difficult to deal with than traditional homophobia and transphobia and peer educators need to be trained on this.”
The guide, which coins a new acronym to describe its target group: DESPOGI, or Disadvantaged because of their Expression of Sexual Preference or Gendered Identity, cautions activists to be aware of “laggards”, defined as “conservative actors whose main aim is to protest or block government action” as well as “traditionalists” who try to ensure that schools safeguard conservative values and limit knowledge of liberal values.
When organising conferences and workshops, activist organisations are advised to invite only stakeholders willing to support LGBTI-friendly policies as inviting “uninformed, prejudiced, ambiguous … participants” can prove to be a barrier to constructive discussion.
“It should be made clear that this conference is not a democratic exercise but an expert meeting with the goal to advise government on how to effectively develop or implement its supportive policy,” the guide says.
The guide tackles the issue of how to evaluate the effectiveness of policies, programs or initiatives, noting traditional “effect and impact” research centring around a hypothesis can have negative side-effects, often highlighting elements that did not work. It recommends adopting evaluation methods that focus on “success factors”.

Wow! Did you get that? Brave New World here we come! Welcome Rainbow Big Brother! Thankfully not everyone is thrilled with all this, and the article did provide one voice of dissent:

Centre for Independent Studies senior research fellow Jeremy Sammut said policymakers needed to be attuned to the tactics promoted by the GALE Association, which posed a serious risk to “traditional notions of pluralism and tolerance”.
“Pushing the idea of ‘modern homophobia’, creating terms such as ‘laggards’ and ‘conservative actors’ … is designed to beat up on people who don’t think like the activists do,” Professor Sammut said. “They’re basically saying to government … if you don’t sign up to this, you’re homophobic.”

This is precisely the sort of thing folks like Orwell sought to warn us about. This is what he wanted to see us avoid. But we find ourselves right smack in the middle of it all. We have not learned the lessons of history. We did not learn from the god that failed, atheistic Communism.

We are now living in a different sort of police state, where wrong thoughts about sexuality and gender will increasingly mean you are an enemy of the State and must be treated accordingly. I wonder if even Orwell and Huxley could have imagined things would have gotten this bad.