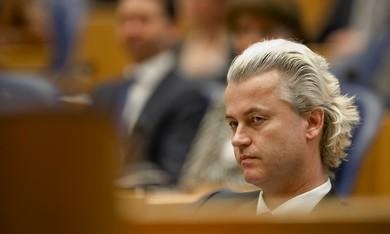 Anti-immigration politician Geert Wilders listens during a debate in the Dutch parliament about the government’s resignation caused by a crisis over budget cuts in The Hague April 24, 2012. Prime Minister Mark Rutte offered his minority Liberal-Christian Democrat coalition’s resignation to Queen Beatrix of the Netherlands after a split with the populist Freedom Party of Wilders, opening the way for early elections. REUTERS/Robin van Lonkhuijsen/United Photos (NETHERLANDS – Tags: POLITICS)