As Australia and the West becomes more and more dhimmified, we will see more and more sharia law being rolled out right under our noses. Thus we will see much more of things like polygamy being embraced – and paid for by the taxpayer. Indeed, it is happening already.

The latest kerfuffle about Centrelink payments for multiple Muslim wives in Australia is not new by any means. I have been documenting this for quite some time now. Let me offer just a few somewhat recent headlines from the Australian press on this matter:

“Why should polygamy be a crime?” Keysar Trad
The Age, October 2, 2009
“There is no requirement for such a union to be ‘legally’ registered with a secular body that does not recognise the clauses in a Muslim union. Plural relations of this nature that take place in Australia are treated like de facto relationships and are not registered. This keeps them outside the ambit of the nation’s criminal and marriage laws. Such unions are not considered adulterous because they follow the rules of an Islamic union. They are not secret and they carry no stigma under God…. A man can have multiple girlfriends. Why not formalise that into a commitment for life? Why should ‘bigamy’ be a crime?” 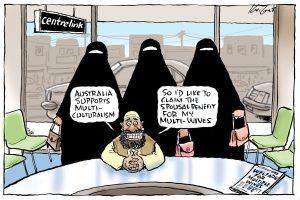 “Growing number of Muslim men and multiple wives exploiting loophole for taxpayer handouts”
Herald Sun, March 5, 2010
“A growing number of Muslim men and their multiple wives are exploiting a loophole to get taxpayer handouts. Centrelink has confirmed it has investigated up to 20 cases of multiple relationships, including polygamy, in the past two years for payment irregularities.”

And this is occurring all throughout the West. It seems that wherever Muslims congregate in sufficient numbers, you can count on polygamy taking place, usually subsidised by the taxpayer. Consider just a few such examples from the UK:

“Baroness Flather: Polygamy, welfare benefits and an insidious silence”
Daily Mail, 16 September 2011
“In this disturbing and brave exposé, a Pakistan-born baroness reveals how some of her countrymen have as many children as possible by several wives so as to milk our welfare system.”

“Strolling in a park, a London businessman and his THREE wives – just one of up to 20,000 such multi-wife marriages in polygamy Britain”
Daily Mail, September 20, 2014
“Nabilah, her husband and his two other wives are part of a growing number of polygamous marriages taking place in Britain. They are rubber-stamped under Sharia law, which considers polygamy completely legitimate as Muslim men are permitted to take up to four wives. It is, of course, in complete contradiction to UK law, under which bigamy is illegal and can result in a prison sentence of up to seven years.”

“Polygamy website for British Muslims touts skyrocketing growth, 100K membership”
The Washington Times, August 25, 2016
“The founder of a polygamy website for British Muslims has released a press release touting its quick rise to 100,000 members. Azad Chaiwala of SecondWife.com and its sister website Polygamy.com claims the two have reached the milestone in less than three months. He says the venture will officially be considered a success once 1 million members join.”

But let me return to Australia. The latest episode of this which has featured rather heavily in the media over the past few days has generated outrage since it is becoming clear that ordinary Australians are being forced to subsidise polygamy, even though it is illegal under Australian law.

The Sunday Daily Telegraph broke the story, and this is how their report began:

Centrelink is ignoring Islamic polygamy, paying spousal benefits to Muslim families with multiple wives in an effort to save taxpayers’ money. The welfare agency has revealed it refuses to collect data on polygamous marriages under Islamic law, despite the fact some families are claiming to be living in a domestic relationship with more than one woman when claiming welfare.
Describing the decision as “political correctness” gone mad, MPs last night called for a full investigation and demanded the welfare agency start collecting the data. One reason offered by officials, confirmed by Tony Abbott’s former chief of staff Peta Credlin, is that the women might otherwise be able to claim the sole parent pension, which would cost taxpayers more than the benefits available to individuals in a marriage or de facto relationship.

Thankfully the practice has resulted in widespread criticism from some politicians, commentators and the public at large. Liberal Senator Cory Bernardi for example said this about data supposedly not being kept on multiple wives: “We are always told the data is not kept. (T)he lack of will to confront some individuals who seek to apply a different law to themselves means politicians are afraid to speak out.”

Pauline Hanson was quite outspoken about all this:

Welfare is out of control, it’s become a way of life and not a helping hand. Unless we reign it back in we will not be able to support those truly in need, including the aged, sick and young. For too long the leaders of this nation have disregarded it purely for the vote. Enough is enough….
They will keep going on and abusing us, our generosity and our culture. We have been taken for fools. Second marriages are not ¬acknowledged in this country or their children, and they should not be funded at all. It is against the law to have multiple marriages, but we are condoning it as taxpayers.

The federal government talked tough about this, while still making excuses for it:

Federal Treasurer Scott Morrison has taken aim at welfare rorters — including reported cases of polygamy by Muslims to take advantage of spousal benefits — saying cracking down is a priority for the government, seven days ahead of the release of the midyear budget update….
The practice of polygamy by Muslim men and women to claim multiple Centrelink benefits is “100 per cent wrong”, Mr Morrison said. However, he said it would be more expensive for the government if each wife claimed an independent welfare allowance. “The law and its implementation cannot condone polygamy. It’s against our values, it’s 100 per cent wrong,” he said.

Andrew Bolt was quick to spring on this:

Really? So why does the Department of Human Services publish this helpful advice to the polygamous?:

“Your relationship status
Defining you and your partner as a couple can affect your eligibility or payment rate for our payments and services…
Multiple relationships
A multiple relationship is when you have more than 1 partner at the same time. Your relationship with each partner will be assessed separately to determine if you’re a member of a couple. When we assess your claim for a payment, the income and assets of each of your partners will be used to determine your eligibility and payment rate. The lowest payable rate will be applied. Your income and assets may equally affect the rate of payment of each of your partners.”

Good question indeed. So which is it? Is Islamic polygamy “100 per cent wrong” or is it now fully part of Australian culture and law? It is time that our political leaders started to show a bit of backbone here and get to the bottom of this. It seems like the system is being rorted big time by Muslims who want to transform Australia into a Middle Eastern colony, complete with misogyny, polygamy and sharia law.

The quasi-legal practice of polygamy in Australia and the West is part of the greater problem of creeping sharia in which more and more Islamic law is being established and enforced – law which is usually at variance with Western law. No nation can long survive with a two-tiered law system.

Either Western law will prevail, or Islamic law – but you cannot have both for long. It is time Australian politicians stopped playing games here and clamped down on this illegal and misogynist practice. We owe it to our women and our culture to say no to this unacceptable incursion of Islam into our nation – especially when the taxpayer has to dish out money for it.

13 Replies to “Islamic Polygamy Rapidly Expanding in the West”