I was part of the radical 60s counter-culture, and one of the things we made a real big stink about was free speech. We insisted that everyone had a right to say anything they wanted anytime, and denying them that right was a sure sign of fascism. 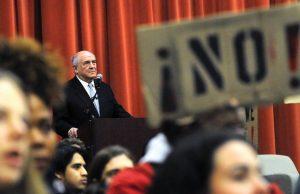 My, how the tables have turned. The loudest and proudest example of fascism today is the secular left, especially as witnessed on our college campuses. They are doing everything they can to ensure that no one with a contrary point of view is allowed to speak. They will seek to shout down and shut down any public speaking event held by those deemed to be too dangerous, such as conservatives and Christians.

Examples of this are mounting up by the week. I recently wrote about an event which was trashed by leftist thugs when Milo sought to speak at a California university: billmuehlenberg.com/2017/02/03/free-speech-fascism-left/

Another case has emerged, this time from Middlebury College in Vermont. A conservative student group wanted the conservative political scientist Charles Murray to speak there. This sociologist, political thinker and author has written a number of important volumes, including Losing Ground (1984), In Pursuit of Happiness and Good Government (1988), the controversial 1994 book, The Bell Curve, and Real Education (2008).

But it seems that some of the students at the school did not want him to speak, so they shut down the event. Things got so violent that one professor who tried to allow Murray to speak was taken to hospital. Murray offers a lengthy, first-hand account of what transpired here: www.foxnews.com/opinion/2017/03/06/charles-murray-into-middle-mob-what-happened-when-tried-to-speak-at-middlebury.html

A briefer news report put it this way:

Hundreds of students at Middlebury College last Thursday chanted and shouted at Charles Murray, the controversial writer whom many accuse of espousing racist ideas, preventing him from giving a public lecture at the college….
Prior to the point when Murray was introduced, several Middlebury officials reminded students that they were allowed to protest but not to disrupt the talk. The students ignored those reminders and faced no visible consequences for doing so.
As soon as Murray took the stage, students stood up, turned their backs to him and started various chants that were loud enough and in unison such that he could not talk over them. Chants included:
“Racist, sexist, anti-gay, Charles Murray, go away.”
“Your message is hatred. We cannot tolerate it.”
“Charles Murray, go away. Middlebury says no way.”
“Who is the enemy? White supremacy.”
“Hey hey, ho ho. Charles Murray has got to go.”
The scene was recorded and posted to YouTube. Murray appears around minute 19. After the students chanted for about 20 minutes, college officials announced that the lecture would not take place but that Murray would go to another location, which the college didn’t name, and have a discussion with a Middlebury faculty member — livestreamed back to the original lecture site.

Thankfully not everyone was thrilled with the student fascists in action. Two professors at the college put out a statement in which they bewailed this new form of censorship sweeping our college campuses. Keegan Callanan and Jay Parini wrote a statement of principles that they published in the Wall Street Journal. Here is what they wrote:

Genuine higher learning is possible only where free, reasoned, and civil speech and discussion are respected.
Only through the contest of clashing viewpoints do we have any hope of replacing mere opinion with knowledge.
The incivility and coarseness that characterize so much of American politics and culture cannot justify a response of incivility and coarseness on the college campus.
The impossibility of attaining a perfectly egalitarian sphere of free discourse can never justify efforts to silence speech and debate.
Exposure to controversial points of view does not constitute violence.
Students have the right to challenge and even to protest non-disruptively the views of their professors and guest speakers.
A protest that prevents campus speakers from communicating with their audience is a coercive act.
No group of professors or students has the right to act as final arbiter of the opinions that students may entertain.
No group of professors or students has the right to determine for the entire community that a question is closed for discussion.
The purpose of college is not to make faculty or students comfortable in their opinions and prejudices.
The purpose of education is not the promotion of any particular political or social agenda.
The primary purpose of higher education is the cultivation of the mind, thus allowing for intelligence to do the hard work of assimilating and sorting information and drawing rational conclusions.
A good education produces modesty with respect to our own intellectual powers and opinions as well as openness to considering contrary views.
All our students possess the strength, in head and in heart, to consider and evaluate challenging opinions from every quarter.
We are steadfast in our purpose to provide all current and future students an education on this model, and we encourage our colleagues at colleges across the country to do the same.

Well done, and the professors who wrote this are not even conservatives; they just care about free speech and debate – something which far too many students do not seem to care about. And another article on this appeared in the Atlantic, penned by someone who is not a conservative. He begins his piece this way:

My fellow liberals, please watch the following video. It suggests that something has gone badly wrong on the campus left.

The video can be seen here: www.youtube.com/watch?v=a6EASuhefeI

What’s considered morally legitimate at Middlebury differs dramatically from what’s considered morally legitimate in large swaths of America. When colleges like Middlebury are considering whom to honor, they have every right to apply their own ideological standards. But if they use those standards to determine which speakers conservative student groups can invite, they will make it hard for those groups to function on liberal campuses at all. And in an era in which Americans are already ideologically cocooned, that would be a disaster….
Liberals may be tempted to ignore these incidents, either because they are uncomfortable appearing to defend Charles Murray, or because, in the age of Donald Trump, they’re worried about bigger things. That would be a mistake. If what happened at Berkeley, and now at Middlebury, goes unchallenged, sooner or later, liberals will get shouted down too. To many on the campus left, after all, Zionism is a racist ideology. Drone attacks constitute war crimes. Barack Obama was the deporter-in-chief. Hillary Clinton supported a racist crime bill. Joe Biden disrespected Anita Hill. There will always be justifications.

In these cases some professors are doing the right thing while some students are pushing the censorious bullying. But often it is those running and teaching in the schools who are so very much at fault. Several years ago English philosopher Roger Scruton wrote about this in an important article entitled “The End of the University”.

In it he examines the thoughts of Cardinal Newman and his 1852 book, The Idea of a University, and then goes on to say this:

A visitor to the American university today is more likely to be struck by the indigenous varieties of censorship than by any atmosphere of free inquiry. It is true that Americans live in a tolerant society. But they also breed vigilant guardians, keen to detect and extirpate the first signs of “prejudice” among the young. And these guardians have an innate tendency to gravitate to the universities, where the very freedom of the curriculum, and its openness to innovation, provide them with an opportunity to exercise their censorious passions. Books are put on or struck off the syllabus on grounds of their political correctness; speech codes and counseling services police the language and thought of both students and teachers; courses are designed to impart ideological conformity, and students are often penalized for having drawn some heretical conclusion about the leading issues of the day. In sensitive areas, such as race, sex, and the mysterious thing called “gender,” censorship is overtly directed not only at students but also at any teacher, however impartial and scrupulous, who comes up with the wrong conclusions.
Of course, the culture of the West remains the primary object of study in humanities departments. However, the purpose is not to instill that culture but to repudiate it—to examine it for all the ways in which it sins against the egalitarian worldview. The Marxist theory of ideology, or some feminist, poststructuralist, or Foucauldian descendent of it, will be summoned in proof of the view that the precious achievements of our culture owe their status to the power that speaks through them, and that they are therefore of no intrinsic worth. To put it another way: The old curriculum, which Newman saw as an end in itself, has been demoted to a means. That old curriculum existed, we are told, in order to maintain the hierarchies and distinctions, the forms of exclusion and domination that maintained a ruling elite. Studies in the humanities are now designed to prove this—to show the way in which, through its images, stories, and beliefs, through its works of art, its music, and its language, the culture of the West has no deeper meaning than the power that it served to perpetuate. In this way the whole idea of our inherited culture as an autonomous sphere of moral knowledge, and one that it requires learning, scholarship, and immersion to enhance and retain, is cast to the winds. The university, instead of transmitting culture, exists to deconstruct it, to remove its “aura,” and to leave the student, after four years of intellectual dissipation, with the view that anything goes and nothing matters.

All this really does spell the end of the university. Whether the WSJ and Atlantic articles are an indication of something better remains to be seen. Hopefully a bit of a backlash is occurring as more and more people tire of the antics of the anti-free speech bullies. If not, the West is pretty much finished.