Now this really bothered me when I saw it, and I would think that any fair-minded person would be equally upset – upset at the appalling double standards and rank hypocrisy. And I am absolutely dumbfounded at this clear case of censorship. It involves a pro-life TV ad which was pulled because it was deemed to be “political,” and not properly labelled as such.

Consider this news report about the ad:

The broadcast of an anti-abortion advertisement has been censured by the regulator for concealing its political nature. The television advert, made by the pro-life group Emily’s Voice, was found in breach of the Broadcasting Services Act because it failed to include the correct labelling required of all political matter.
The commercial for the Not Born Yet campaign featured a tradie talking about his fears when his wife told him she was pregnant four weeks after their wedding. “I was your typical bloke, a bit slow to grow up and I avoided commitment,” the man says before walking into his home to reveal his seven children, whom he has fathered over 17 years.
The ad ends with the children holding up ultrasound pictures of unborn babies and promoting the website notbornyet.com. It was broadcast by the Ten Network in Western Australia last September. Political ads must include the name of person who authorised it, place where office is, and name of every speaker in the ad.
The regulator, the Australian Communications and Media Authority, deemed the ad was political matter as it sought to influence personal choices made by people experiences unwanted pregnancy, and also influence public opinion about abortion. Ten agreed to improve its commercials review process. 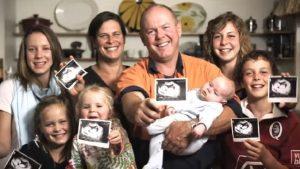 The ad can be seen in the first link below.

Let me just state the obvious here. In one sense, what does abortion have to do with politics? It has to do with basic human rights. Without the right to life no other rights are possible. This is about one of the most important moral issues of our time.

Sure, the pro-life struggle can enter into the world of politics and so on, but it stands alone as a fundamental issue which impacts every single one of us. And the group behind it, Emily’s Voice, is not a political party, or a political action group – it is a pro–life organisation which does all it can to stand up for the unborn.

Emily’s Voice exists to help Australians fall in love with the unborn and encourage and support women facing an unplanned or crisis pregnancy….
The campaigns link to the www.notbornyet.com website to expand the discussion about life, by providing accurate, timely and helpful information and support.
The website contains links to organisations and resources that can provide this support and counselling, as well as featuring many other personal stories of women, men and in similar circumstances.
We also provide some financial assistance to practical pregnancy support services in areas where we advertise.

And sure, the ad seeks to “influence personal choices”. That is what ads do. As one person rightly asked, “Isn’t all advertising supposed to influence you to do something you were not otherwise planning to do?” Of course. All ads seek to convince people to do things or buy things or change their behaviour.

So of course all ads seek to influence our behaviour, seek to get us to buy something, or seek to get us to change course. Whether ads are political in nature or not is another matter. As mentioned, there appears to be nothing political at all about the pro-life ad.

But consider this absolute stinker of gross hypocrisy and double standards: All of you by now would have seen a zillion times over an obviously political TV ad – for homosexual marriage. It is played all the time on television. And of course it exists for one reason: to change the way people – and especially politicians – think about the political issue of homosexual marriage and its legalisation.

You can see the entire ad in the third link below. And guess what? Does it feature the mandatory “the name of person who authorised it, place where office is, and name of every speaker in the ad”? Nope, not at all! None of that is there, yet it is as blatant a political ad as you can get.

The TV ad finishes with these words: “Together we can achieve marriage equality” and then it provides a link to the website of the group behind it: www.equalitycampaign.org.au/

And what is the very first thing you see when you go to their site? You see this:

Let your MP know Marriage Equality is only fair
LGBTI Aussies are doing our jobs. It is about time politicians did theirs. Tell your MP: It’s time to vote for equality.
Take Action:
Fax your MP – that’s right, we’re going old school. Send a personalised message now your MP will actually read. First step: Enter your postcode to find your electorate and MP.

Um, if that is not 100 per cent political, I do not know what is. And consider a newspaper report about the ad when it first came out last October. Have a read of some of the things found in the article:

Marriage equality campaigners will launch a new TV commercial this week — to be broadcast on channels 7, 9 and 10 and Foxtel — featuring real people calling for the law to be changed. News.com.au has been given exclusive behind-the-scenes access to the commercial, and the people who volunteered to have their faces beamed into homes across the country. Advocates say the likely death of a plebiscite on the contentious issue means new tactics are needed….
But with the plebiscite a Coalition election commitment, a green light for gay marriage could be years away. LGBTI advocates say the commercial is part of a multi-pronged campaign to make sure that delay doesn’t happen.
Campaign groups Australians4Equality (A4E) and Australian Marriage Equality (AME) have joined forces to produce the ad. Executive Director of A4E, Tiernan Brady, said the ad was dreamt up knowing that the public vote would be unlikely to go ahead.
“If the plebiscite bill fails it’s really important all policy makers see very quickly that gay and lesbian people aren’t going to walk away from their dignity. This is isn’t a campaign that’s going to stop,” he told news.com.au. “All that energy that was built up right across Australia because of the spectre of a plebiscite is going to be maintained.”
AME Co-Chair and state MP for Sydney, Alex Greenwich, said the campaign would call for Australians to contact MPs directly to tell them to get on and give gay marriage the go-ahead. “We know that every political party leader supports this reform and we know that the public does too. So now we ask everyone to add their voice, join the campaign and finally achieve marriage equality.”

It is politics, politics, politics. So why did the Australian Communications and Media Authority not deem this ad to be political in nature, and pull it from our screens since it violates their own rules about having “the name of person who authorised it, place where office is, and name of every speaker in the ad”?

Please explain ACMA. We demand an answer. A generic pro-life ad NOT tied in to any current political campaign was pulled, but a pro-homosexual marriage ad directly tied to a major political campaign is given a free run. What is that word that starts with “H” and ends with “ypocrisy”?

Please contact ACMA and register your strong complaint, and demand of them that they answer why these gross double standards are allowed to go on. Contact details are found here: www.acma.gov.au/theACMA/About/Corporate/Structure-and-contacts/contact-the-acma-acma-1

22 Replies to “Blatant Hypocrisy in the Culture Wars”