One of the most courageous women currently roaming the planet has had to cancel a speaking tour of Australia because of security threats. Ayaan Hirsi Ali was planning to speak at various events, as well as appear on the ABC’s Q&A program tonight, but the tolerance brigade in league with Muslim militants have hounded her out of town.

She was going to be speaking in Brisbane, Melbourne and Sydney, as well as in New Zealand, but with threats against her being ramped up, at the last minute she decided she would have to withdraw. As one recent news report on this states: 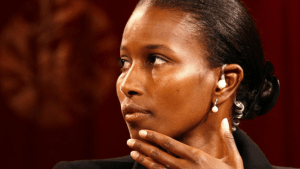 Ms Hirsi Ali was born to a Muslim family in Somalia, but has been a vocal critic of Islam after renouncing the religion. She has attracted critics for speaking out about reforming traditional Islam and confronting militant Islam.
She has been a controversial figure, earning, according to the event’s organisers, “widespread criticism among the liberal left and death threats from the religious right.”
The event was organised by Think Inc., a Sydney-based organisation that attempts to provoke debate and rational discourse through conversation.
About 2000 tickets had been sold to Ms Hirsi Ali’s speaking events in Australia. Buyers were being notified by email about the cancellations and will receive refunds.
Ms Hirsi Ali’s trip to Australia had sparked protests from a group of Muslim women who accused her of hate mongering and bigotry. Nearly 400 people signed an online petition against Ms Hirsi Ali’s speaking tour.
“Against a backdrop of increasing global Islamophobia, Hirsi-Ali’s divisive rhetoric simply serves to increase hostility and hatred towards Muslims,” the petition, posted on Change.org, said.
The Somali-born Dutch-American activist, author, and former politician, is an outspoken opponent of female genital mutilation. Last month Think Inc said it had been harassed about her appearance.
Its insurers were contacted and warned there could be trouble, and venues where she was scheduled to speak had been contacted and warned that there would be protests where she was due to appear.
Much of this was done by an individual called Syed Murtaza Hussain of the Council for the Prevention of Islamophobia Inc.
He informed Festival Hall in Melbourne there would be 5000 protesters outside the venue if the engagement went ahead. There have been other initiatives, including an abortive appeal on Change.org to prevent Ali from speaking.
Ms Hirsi Ali was elected to the lower house of the Dutch parliament. She moved to the US after receiving death threats for helping to make a short film that showed images of violence against women alongside verses from the Koran.

A week ago Andrew Bolt had written about this latest example of the fascist left seeking to shut down freedom of speech:

Ayaan Hirsi Ali speaks against totalitarian Islam. But rather than simply argue against her, her critics here respond in the way of today’s totalitarian Left- she must not come speak here. Other totalitarians are threatening her with death.
What in heaven’s name has happened here to free speech and debate?
She’s female, black and grew up Muslim. Now, a group of Muslim women in Australia are petitioning her upcoming speaking tour to the country. The group, which includes a number of high-profile writers, academics and activists, have expressed “disappointment” over Ayaan Hirsi Ali’s invitation to speak in Australia as part of a tour organised by event group Think Inc.
The petition starts: “We, the undersigned, would like to express our utmost disappointment that Ayaan Hirsi-Ali is being brought to Australia by Think Inc.”
And it accuses Hirsi Ali of creating the hatred that the writers themselves heap on her, and of causing the kind of danger that actually forces her to travel with people to save her from being murdered.

Yes quite so. Hirsi Ali, like her compatriot in arms, Dutch MP Geert Wilders, travels with 24/7 security protection. She is not trying to kill anyone, but plenty of people are trying to kill her. And now because of all their very real threats, she has been forced to cancel her speaking tour.

The totalitarian left would be whooping it up big time now: another blow to freedom of speech. Another jackboot on the face of freedom. Another act political thuggery. Thanks progressives – every day you reveal your true colours. You do not care about freedom one bit. You simply care about complete control, with all dissenting voices forever silenced.

The radical left is not in the least bit interested in debate and a free flow of ideas. They want to shut down all debate and squash any contrary points of view. Bullying, intimidation and thuggery are their preferred means of realising their goals.

In another piece Bolt offers ten recent examples of this leftist thuggery. He concludes with these words:

Those are 10 more signs that our freedom to speak is being stolen from us by morons. I say “morons” not just because the safe way to settle debates is to simply prove your opponents wrong — or learn you’re wrong instead.
They are morons also because they’re too dumb or desperate to even try to argue, preferring to settle debates with fists, threats, abuse, boycotts, race rules or the law. You, on the Left: do you really want to be part of this morons’ movement?

Yep, and there is nothing much worse than the totalitarian left getting into bed with totalitarian Islam. That case of seemingly strange bedfellows makes for the perfect storm. And freedom fighters like Hirsi Ali and all the rest of us are the big losers.

Oh, and where are all our political leaders who are strongly condemning this outrageous attack on free speech? Silly question I suppose.

21 Replies to “Hirsi Ali, Islam and the Anti-Free Speech Brigade”