One could be forgiven for thinking that we live in war-torn Syria or lawless Somalia. After all, we live in a land where crime and criminality seem to be getting out of control, with no relief in sight. But I refer to the state of Victoria and its lefty Labor leader Dan Andrews.

One cannot turn on the television news or open the newspapers without seeing a daily batch of horror stories of gangs running amuck, homes being invaded, and ordinary citizens living in fear for their lives. Consider just two days’ worth of headlines from the Herald Sun website (May 18 & 19): 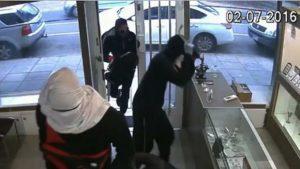 These are just a sampling of what we now find occurring on a daily basis. Of course all this is to be expected in a state with a radical left Labor leader. You know the type:
-soft on crime
-lenient sentencing
-not enough police
-leftist judges who side with crims
-no concern for ordinary citizens
-allowing gangs to run riot
-no concern for victims of crime
-refugees allowed in who do not blend in but form criminal gangs and go on rampages

All this is a recipe for disaster, and that is exactly what we now have in Victoria. And things only look to get worse. The real worry is it is still a year and a half before we get to have another election. So it seems we are stuck with all this out of control crime and criminals.

And the figures show it:

The number of criminal offences recorded in Victoria went up by more than 50,000 last year — an 8 per cent rise in the per-capita crime rate. The latest report from the Crime Statistics Agency of Victoria shows a total of 552,005 offences were recorded across the state to the end of December 2016, compared to 500,971 in 2015. That equates to an increase in the number of offences of 10.2 per cent. When population growth is factored in, the crime rate has gone up by 8.1 per cent, or by 9,119 offences per 100,000 people.

Not everyone is pleased with this state of affairs. For example, the former chief commissioner Kelvin Glare said it is time to toughen penalties for these young criminals who are running riot around Victoria. As one article states:

Mr Glare said the Community Advocacy Alliance, made up of former police, had given Victoria Police a 70-point plan on ways to tackle the current crime wave. He said recent reports that youths were being bribed with icy poles and chocolate biscuits was not the way to teach them to behave.
“We’ve got to stop treating these young people as if they’re just misguided youths and just need a hug and a kiss. They’re thugs many on their way to becoming career criminals,” Mr Glare said. “The incarceration for young people or people of any age ought to be pretty tough. It ought to make them not want to go back.”

Even Police Commissioner Graham Ashton, who claims the police are not being soft on crime, has admitted to the “unprecedented” problems found in Victoria: “We’re dealing with youth offenders whose first offence is a very, very serious crime. Robbery on a jewellery store, armed robbery. Show me a time in the past where our youth have been committing those sorts of offences as a first time.”

The article concludes by highlighting our growing list of problems:

Youth crime and punishment has been a vexed issue in Victoria for some time.
-Last week the Victorian Government introduced changes to the youth justice system after 15 inmates broke out of the Malmsbury Youth Justice Centre.
-There have been repeated riots at the Malmsbury and Parkville centres in the last six months.
-Last year a group of youth detainees had to be moved to the high-security adult Barwon Prison after one riot cause extensive damage at Parkville.
-The problems have come after a jump in the number of violent crimes such as carjackings and aggravated burglaries across the state, and particularly in Melbourne’s growth corridors.
-Statistics showed while the number of youth offenders had declined, there has been an escalation in repeat offending by a small group.

And of course it is not just Victoria, but some unhelpful federal policies as well. For example, we have had some lousy policies in the past that have allowed in to this country folks from elsewhere who do not blend in very well, and often bring their criminality and violence with them. Think about the Apex gang for example. Columnist Andrew Bolt spoke to this issue in a recent piece:

Our immigration and refugee program has become a public menace:
“Police have made several arrests after two armed street gangs stormed Melbourne’s CBD, brawling in Federation Square before moving to Swanston St, shutting down the area. A pitch battle has erupted at Moomba between two armed teenage street gangs, spilling on to the streets of Melbourne. People dining in City Square ran for their lives as gang members used cafe chairs as weapons, running riot from Federation Square to City Square. The melee broke out minutes after the family fireworks ended about 10pm. About 200 youths of the Apex and Islander 23 gangs stormed Federation Square chanting ‘f— the police’, before gang members started beating and punching each other. Police officers were outnumbered ten to one as they called for reinforcements… More than 100 gang members of the notorious Apex gang, responsible for a spate of car thefts in the southeast suburbs, swarmed around a police car. Many gang members were of Sudanese descent. The other gang was made up of Pacific Islander teenagers… The brawl comes weeks after a 16-year-old member of the violent Apex gang allegedly made threats to shoot a female police officer at a police station in Dandenong…”
Note that The Age report refuses to mention that the Apex gang is mainly Sudanese. This refusal to be frank is misleading readers and leaving them unable to conclude the nature of the threat to public safety. In fact, check all the reports on the Apex gang. Note how many studiously avoid mentioning one of the most important things about it – that it is made up predominantly of Africans who are refugees or the children of refugees. We have been dangerously slow to acknowledge this catastrophic failure of our refugee policy. From 2013:
“Community leaders have joined police on regular patrols in Dandenong as the force tries to improve ties with troubled ethnic youths. The ethnically diverse city has crime rates almost 40 per cent higher than the state average… Pacific Islander and Sudanese community leaders were informed by Victoria Police last year that their populations were overrepresented in crime statistics.”
The media, politicians and police keep covering up the fact that refugee and migrant intakes are making us less safe.

Meanwhile, consider some priorities of our authorities. The Victorian Police proudly said this recently on their Facebook page: “Today we raised the rainbow flag at the Police Academy, Victoria Police Centre and Spencer Street Complex to symbolise diversity and equity in the police force and the wider community. Victoria Police is proud to support International Day Against Homophobia, Transphobia and Biphobia.”

Good grief. Victoria is going to the dogs, and all the Victorian government can do is keep pushing radical minority group agendas, as if that were our main concern. No wonder Victoria is in such a mess.

Maybe it is time to consider booking a flight to Venezuela.

7 Replies to “Crime and Not Much Punishment in Victoria”