Sometimes an issue or event is so momentous that it is well worth talking about more than once. Just yesterday I discussed three recent cases of euthanasia (or cases closely related to it), and one of them was so significant and so shocking that it clearly needs to be revisited.

It demonstrates how the rise of the all-powerful state, bereft of any Judeo-Christian foundations, is bringing about the end of man. It celebrates death while despising life. It takes away ordinary decision-making from the individual, and puts it in the hands of bureaucrats and state apparatchiks. 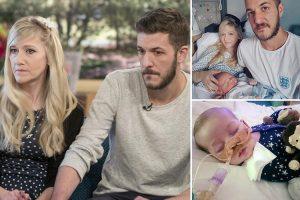 The story involves little Charlie Gard who was born last August with an inherited disease. His parents Connie Yates and Chris Gard were told by their English doctors that nothing could be done and he should be withdrawn from his ventilator. They learned of possible help that was available in the US and had raised over $1.6 million to help fund this last ditch effort to save their son.

But last week the European Court of Human Rights rejected their appeal, and the death sentence is still in place. Now they must simply wait for their baby to die (to effectively be killed by the state). As one expert that I quoted yesterday said, “Death with dignity, in the minds of these medical professionals, means those they have decided are no longer worth fighting for must die faster.”

This is an utterly shocking case. Sadly, when I shared this story elsewhere I had at least one person saying this is no big deal, and that ‘the proposed US treatment is experimental and unlikely to help.’ I replied as any normal parent would: “If it was your own ten-month old son would you take such a cavalier attitude? Sorry, I am not siding with the pro-death bureaucrats here.”

The bottom line goes like this: this is all about a handful of doctors and a handful of judges demanding the death of this ten-month old. The killer state is now in full swing. Or as Matt Walsh put it, “In Europe, a mother has the right to kill her child but she doesn’t have the right to keep him alive. This is barbarism.”

Indeed, his piece on this is worth quoting from further:

I have heard many people rationalize this demented decision by saying “the doctors know best.” That may well be relevant and true in situations where family members are trying to force doctors to administer treatments that they, the medical professionals, know will not work. But that is not what’s happening here. The only thing these parents are trying to “force” the doctors to do is relax their grip so the child can be taken to different doctors in a different country. The doctors may be the final authority on what kinds of medical measures they personally should take, but they are not the final authority over life itself. It is one thing for them to say, “I will not do this treatment.” It’s quite another for them to say, “You are not allowed to have this treatment done by anyone. You must die.” The former is reasonable. The latter is euthanasia. This baby is being euthanized. By barbarians.

He highlights three vital points in this case:

I invite you to read his entire article. He concludes with these words:

Once the right to die has been placed over the right to life, death will continue claiming new ground and eating into life more and more. Death is a destructive force. What else can it do but consume? It’s not quite as bad here yet, but we’re getting there. We already kill hundreds of thousands of children in the womb, and we often speak with admiration of people who make the “brave” decision to commit suicide. And we already, in many instances, place the authority of the State over the rights of parents. Our education system is built around that philosophy.

Another thing I wish to emphasise here are some very prescient remarks made by C. S. Lewis way back in 1947. In yesterday’s article a gal very helpfully offered a sentence from this work in a comment, so I quickly searched for my copy of the book and will offer more of it here.

In his vitally important volume The Abolition of Man Lewis offers three essays on modern education and the modern state. He speaks of the increasing power of the state and of scientific elites, and how this entails power over the masses. He writes:

What we call Man’s power over Nature turns out to be power exercised by some men over other men with Nature as its instrument. . . . Man’s conquest of Nature, if the dreams of some scientific planners are realized, means the rule of a few hundreds of men over billions upon billions of men. There neither is nor can be any simple increase of power on Man’s side. Each new power won by man is a power over man as well.

He speaks about how many have thought that the state and its power of education can mold a new man, one in the image of the all-powerful state:

Hitherto the plans of educationalists have achieved very little of what they attempted and indeed, when we read them — how Plato would have every infant ‘a bastard nursed in a bureau’, and Elyot would have the boy see no men before the age of seven and, after that, no women, and how Locke wants children to have leaky shoes and no turn for poetry — we may well thank the beneficent obstinacy of real mothers, real nurses, and (above all) real children for preserving the human race in such sanity as it still possesses. But the man-moulders of the new age will be armed with the powers of an omnicompetent state and an irresistible scientific technique: we shall get at last a race of conditioners who really can cut out all posterity in what shape they please.

Notice how he speaks about ordinary mothers and children as being part of the bulwark to resist these nefarious plans. We see the same thing occurring in this horrific euthanasia case. The medical and judicial communities have decided they know what is best in this case, and they will decide who shall live and who shall die.

The parents are the last ones to have any say in the matter. They are at the mercy of the technocrats, bureaucrats, and the increasingly powerful and godless state. This is brave new world kind of stuff, and Lewis was warning about it a full seventy years ago.

He might even be shocked at this case. He too would weep for little Charlie and his parents. He too would be amazed at the secular state running amok. Sadly the warnings he gave on this went unheeded. Indeed, he wrote often about this theme, most notably in That Hideous Strength (1946) and The Weight of Glory (1949).

But let me return to this case and bring in one more commentator. Ian Tuttle says this about the case:

The logic of this decision — that a patient’s best interests can be conclusively determined by an objective third party possessed of adequate “scientific” knowledge — will be familiar to anyone who has watched state power over issues of life and death expand throughout the Western world in recent years. In the early 2000s, this logic was at work in the Terri Schiavo case, in which American courts took it upon themselves to ascertain Schiavo’s unexpressed will and enact it; inevitably, they endorsed her death, on the grounds that she would not want to live “with no hope” in her present vegetative state.
Likewise, in Europe, medical “expertise” has been not simply a justification for, but an encouragement to, assisted suicide; guidance from medical professionals has more than a little to do with the fact that, in Belgium and the Netherlands and elsewhere in Europe, assisted suicide is now an acceptable remedy for people suffering not just from terminal illnesses but from depression, autism, and anorexia. Under what circumstances should the tightest bonds of affection — those between parent and child — be subordinated to the judgment of the state?

He concludes with words that echo the concerns of Lewis:

The precedent established by Charlie Gard’s case will metastasize, as similar decisions have. It will be made to apply to children with more-familiar illnesses and better prognoses; it will be used to dismiss the input of parents whose values and priorities when it comes to medical care and end-of-life issues do not align with those of the state; it may be used simply to clear beds for “worthier” patients in a health-care system with very limited resources. This, presumably, will be “compassionate,” too. Any day now, they’ll kill Charlie Gard. But it’s in his own best interest. Don’t you see?

So what can you do about all this? A bit of righteous indignation would be a good place to start. Learning about the horrors of euthanasia and becoming a pro-life advocate would be another good step. You can also pray for this family. Finally, there is a petition you can sign on this: www.change.org/p/uk-parliament-prime-minister-to-allow-charlie-gard-to-go-to-the-usa?recruiter=740837728&utm_source=share_petition&utm_medium=twitter&utm_campaign=share_petition

The horrors that Lewis warned about are now fully upon us. We are not just witnessing the abolition of man, but of individual men, including poor little Charlie Gard.

26 Replies to “Little Charlie Gard: The Rise of Statism and the Abolition of Man”