For over three decades now I have been warning about the militant homosexual agenda. I have written several books on this and hundreds of articles. I have spoken around Australia and overseas seeking to alert parents especially about how our children and grandchildren are the primary targets of the activists.

When one is engaged in a lifestyle in which reproduction is of course impossible, then recruitment is a main means of keeping things going. And the homosexual activists have long admitted that going after our children is a key priority for them.

Let me offer just one quote – of many – on this. The headline says it all: “Can We Please Just Start Admitting That We Do Actually Want To Indoctrinate Kids?” The article continues, “‘NOOO! We’re not gonna make kids learn about homosexuality, we swear! It’s not like we’re trying to recruit your children or anything.’ But let’s face it – that’s a lie. We want educators to teach future generations of children to accept queer sexuality. In fact, our very future depends on it.”

But the trouble with being a watchman on the wall is people can so easily tune out, ignore the warnings, and just become ho-hum about the dangers being spoken of. It is far too easy to just go back to sleep, and forget the importance of being vigilant, especially so that we can protect our children.

Well, I will continue to sound the alarm, even if no one ends up listening. Indeed, I have a duty to stay at my post and continue the alerts. Woe is me if I don’t take my responsibility on this seriously. If for no other reason, I will continue blowing the trumpet because I care greatly about my own children. 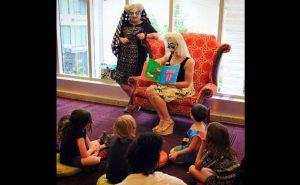 Let me offer here just one more ugly example of the homosexual militancy and war on our children, then I will turn to a few other watchmen who also care deeply about these matters. The example comes from the US, and is sickening to read about:

The Boston Public Library recently had a blasphemous anti-Catholic group of drag queens called the Boston Sisters of Perpetual Indulgence lead a story time for children as part of their celebration of Pride Month. Photos of the event were posted on both the main Boston Public Library Facebook page and the Facebook page for their Children’s Library. The caption of the photo posted on the Children’s Library page reads: “Let’s end Pride Month with a drag… drag queen storytime, that is! Join us on Thursday, June 29th at 3:30 for another visit from the Sisters of Perpetual Indulgence.”

Thankfully many concerned parents made comments on the Library’s Facebook page about this deplorable activity. One said this: “I find this mockery of my Catholic faith quite offensive. This is bald-faced bigotry and hatred and the library is allowing it. Disgraceful!” Another wrote, “This is why I don’t bring my kids to the Library. It’s so inclusive unless it’s Catholics, then they can bash and shame. And yes, this [is] child abuse.”

And thankfully I am not alone in sounding the alarm. Others have also taken up the struggle, sickened by the relentless assault on our children. Let me share from three of them here. Michael Brown has also long been writing and warning about these matters.

In his newest piece he speaks of how children are the object of intense homosexual indoctrination, and he provides yet more examples of how the activists are going directly after our children. He then concludes with these words:

Sadly, I could give almost endless examples of this kind of pressure and abuse and indoctrination, and I’ve written long chapters in books on this along with scores of articles. But for those who are still living in denial, please do face the facts. For years now, LGBT activists have been coming after your children, and their strategy has been immensely successful so far.
It’s up to us as parents and educators and pastors and leaders and young people and old people to fight fire with fire, to get more involved in our schools, to get our message out, and to indoctrinate kids with the truth. We can teach them to be loving and kind to everyone, especially those who seem different, without teaching them to affirm that which is contrary to God’s design and plan. And whatever we do, we best do it on our knees, crying out for divine intervention. Without that, this ship has long since sailed.

Jonathon Van Maren is another watchman on the wall who has often written about these matters. He reminds us in a new piece that the end game of the militants is to shut down all opposition to their radical agenda. It is not just children at risk, but the church, the family, and things like religious freedom.

He offers examples of this taking place and heating up, especially in big business and even in the Republican Party, and then concludes as follows:

Next up is LGBTQ-friendly education in schools, from kindergarten onwards, and the destruction of traditional values in North America is well on its way. Christians need to realize that the gay rights movement has no intention of “living and let live.” Those who thought that the debate over gay marriage may have put an unsatisfactory end to a nasty battle in the culture war must think again. These activists are not satisfied with letting Christians go about their business, attend church on Sundays, raise their families, and run their own Christian schools or home-schooling groups. They will enforce the New Morality with McCarthy-esque enthusiasm, and it is essential that we wake up and fight back. Resentful eyes are on the Shire, and Christians must be warned that their very way of life is already under attack.

Finally, Ben Shapiro also examines the war we are in, and looks at how the non-profit status of religious organisations and home schooling are under direct assault. He then says this:

Then, when parents refuse to comply, parents will be accused of participating in truancy, or worse, propagation of anti-gay bullying. It’s a convenient way of utilizing government-approved education as a proxy for shutting down religious parenting. We now live in a country in which the Department of Education, dedicated to teaching children, displays a gay pride flag on its Facebook page. To believe they will not exert their authority over those who disagree is to demonstrate profound ignorance of the nature of executive government.
With Justice Kennedy’s opinion in one hand and a rainbow flag in the other, the secular left will now press its advantage. Conservatives who pooh-pooh such notions should remember when the secular left insisted that same-sex marriage was a conservative scare tactic. The left requires constant revolution. And that revolution will not end with the declaration of “dignity” provided by Kennedy or a few vulgar parades featuring chaps in assless chaps or a rainbow light display at the White House. It will not end until the unbelievers are destroyed.

As all these commentators are fully aware, there are two main bulwarks that still exist to help protect our children: the family and the church. And the militants are hard at work to destroy both, so that their job of getting access to our children becomes so much easier.

If the war on our children is being made difficult by stubborn things like family and church, then the militants will continue to assault both until they no longer offer any opposition to their destructive crusade. But as long as they keep targeting our children, I will keep raising the alarm.

Whether folks will heed the warnings that I and others keep making is another matter. For the sake of our children and our future, we sure hope that they do.

13 Replies to “Hands Off Our Children”