There are plenty of ways in which homosexual activists and their supporters seek to undermine the biblical view of homosexuality. One of the major tactics used by the revisionists is to simply make the claim that Jesus never said anything about the matter.

The idea is that he said nothing about it, so therefore it was no big deal to him, and so it should be no big deal to us. We hear this all the time, not only from secular activists but by quite clueless Christians as well. So how might we respond to such claims? Do they hold any water? 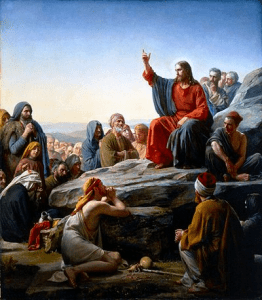 One really has to stretch things to come up with the claim that Jesus said nothing about homosexuality. Sure, he did not of course speak about things like homosexual marriage and the like. No one did back then, and basically no one did until just recently.

While the specific issue of homosexuality was not addressed, he did indeed speak plenty about God’s intentions for human sexuality and the like, as will be seen in a moment. But he certainly was not unaware of the great sin of homosexuality.

It is also true that Jesus never said a word about rape, incest, child abuse, arson or pollution either. Are we to argue therefore that these behaviours are morally acceptable, and that Jesus has no problems with them? Is anything and everything OK if Jesus did not specifically mention it or condemn it?

The truth is, arguing from silence in these matters will get you nowhere fast, and it is foolish to even try to run with this tactic. Did Jesus approve of rape because he did not explicitly condemn it? Hardly. In the same way, Paul never once explicitly mentions the virgin birth. Did he therefore not believe in it?

The answer to this objection is quite simple. Jesus, as a good Jew of his day, shared the common Jewish understanding of homosexuality, which was to utterly oppose it. There was very little need for Jesus to proscribe homosexuality. It was a given in Jewish culture that it was an abomination to God and was not to be practised amongst the Jews.

Indeed, “the reason for Jesus’ silence on this matter is most likely the fact that homosexuality was virtually unknown in Jewish Palestine (it was considered the Gentile vice) and, therefore, unlikely to have come to Jesus’s attention” as Manfred Brauch puts it in his helpful book, Abusing Scripture.

Moreover, what Jesus did do throughout his ministry was to affirm the authority of the Old Testament, where the sin of homosexuality is of course clearly spelled out. We see this for example in such places as John 17:17 and Matthew 19:4-5.

But the argument that Jesus never condemned homosexuality needs to be considered from an even wider perspective. God’s plans for human sexuality have always been limited to that of male/female married sex. No other sexuality is allowed in the Bible.

And married heterosexual sexuality was established by God in the opening chapters of Genesis. That has always been, and forever will be, the divine intention for sex. Indeed, this is one of the most important considerations to bear on this subject.

The negative prohibitions against homosexuality must be seen in the light of the positive teaching about heterosexual marriage as elaborated in Genesis 1 and 2, and reaffirmed throughout Scripture. As James De Young puts it, “the creation of humans as male and female (Genesis 1) and the heterosexual union that constitutes marriage (Genesis 2) lie at the basis of the rest of Scripture and its comments about sexuality and marriage.”

God’s intention for human sexuality is laid out quite plainly in the early chapters of Genesis. John Stott says three fundamental truths emerge from the creation account of Genesis 1 and 2: 1) the human need for companionship; 2) the divine provision to meet this human need; and 3) the resulting institution of marriage. Genesis 2:24 makes it clear that one man and one woman only can constitute a marriage bond:

Thus Scripture defines the marriage God instituted in terms of heterosexual monogamy. It is the union of one man with one woman, which must be publicly acknowledged (the leaving of parents), permanently sealed (he will “cleave to his wife”), and physically consummated (‘”one flesh”). And Scripture envisages no other kind of marriage or sexual intercourse, for God provided no alternative.

As Old Testament scholar Kenneth Mathews says, “Without question 2:24 serves as the bedrock for Hebrew understanding of the centrality of the nuclear family for the survival of society. Monogamous heterosexual marriage was always viewed as the divine norm from the outset of creation.”

Or as Dr J. J. Davis says, “Human sexuality is reflected in the differentiation of two, not three or four, sexual genders, nor some androgynous combination of the two.” Homosexual couples cannot fulfill the command to be fruitful and multiply (Gen. 1:28).

Or as Greg Bahnsen reminds us: “It was God’s ordained design for sexual relations to be in the form of male-female union, man and wife becoming ‘one flesh,’ and God created the distinction between the sexes to that end. This creation of sexual differentiation by God from the beginning established heterosexuality as the normative direction for the sexual impulse and act.”

Moreover, this creation ordinance “is continually reaffirmed by the interpretations of the creation account in the New Testament.” Jesus affirms it in Mark 10:6-9 (= Matthew 19:4-6) for example, while Paul affirms it in I Corinthians 6:16 and Ephesians 5:31.

As ex-homosexual Bob Davies says, “Any alternative of this pattern is a distortion of God’s original plan.” The words of Jesus in Matthew 19 need to be spelled out here. In verses 4-6 we find this very strong affirmation of the Genesis ideal:

“‘Haven’t you read,’ he replied, ‘that at the beginning the Creator “made them male and female,” and said, “For this reason a man will leave his father and mother and be united to his wife, and the two will become one flesh”? So they are no longer two, but one. Therefore what God has joined together, let man not separate’.”

As theologian and ethicist Stanley Grenz remarks, “Christians maintain that this radical teaching of Jesus forms the heart of the biblical understanding of marriage and as such constitutes the ideal in all eras.” American scholar Robert Gagnon concurs: Jesus

shows no awareness, much less acceptance, of any other pattern – even though no Jew in antiquity could have been oblivious to homosexual relationships among many Gentiles. There was no need for him to comment on whether homosexual unions should be permitted and, if so, whether his stance on divorce and remarriage should apply to them too. The creation texts authorized only one type of sexual union. It would have been a forgone conclusion for him that homoerotic relationships and human-animal unions, both proscribed in Leviticus, were unacceptable.

Thus heterosexual marriage as intended by God is the measuring rod by which we judge homosexuality or any other sexual expression. As Thomas Schmidt reminds us, “Every sexual act that the Bible calls sin is essentially a violation of marriage, whether existing or potential.”

Thus the theological revisionists will have to come up with something far better, more logical, and much more biblical, if they want to destroy the clear biblical teachings on homosexuality.

13 Replies to “‘But Jesus Never Said Anything About Homosexuality’”