It goes without saying that until every single baby is safe and secure in his or her own mother’s womb, we pro-lifers have a lot of work to do. But I for one am quite happy to celebrate the various wins we are having along the way. And in the US at least we keep seeing a number of victories which should encourage us all.

The indicators of a pro-life surge there are many. For example, abortion mills continue to close down, which is always a good thing. Sure, new ones may spring up, but last year closures led the way. As one report puts it: 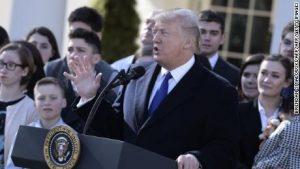 Pro-life wins are also occurring with various pieces of legislation at state and federal levels. As but one example, consider this recent victory:

As hundreds of thousands of pro-life people prepare to march in the March for Life, the House of Representatives voted to approve the Born Alive Abortion Survivors Protection Act — legislation protecting babies who survive abortions.
The Born-Alive Abortion Survivors Protection Act (H.R. 4712) passed 241-183. All Republicans voted for final passage, but only six Democrats voted in favor of it. House Majority Leader Kevin McCarthy (R-CA) said the bill was necessary to protect babies who are born alive after botched abortions.
He said, “This bill states simply that if a baby is born after a failed abortion attempt, he or she should be given the same medical care as a baby born any other way. In line with our longstanding commitment to empower women, mothers will never be held criminally accountable. However, doctors who fail to provide medical care to newborns will be held criminally accountable. There is absolutely no ambiguity here. This is about protecting babies who are born and alive, and nobody should be against that.”
The bill would amend existing U.S. law to “prohibit a health care practitioner from failing to exercise the proper degree of care in the case of a child who survives an abortion or attempted abortion.”
www.lifenews.com/2018/01/19/house-passes-pro-life-bill-protecting-babies-born-alive-after-botched-abortions/

With a more-or-less pro-life political party now holding both houses of congress, and the presidency, a number of wins were recorded last year. Who says politics does not matter? A recent piece at National Review looks at some of these achievements. Here are some of them:

One year into his presidency, Trump has managed to retain the support of key pro-life groups and even to push forward a few key victories for the movement. Most important, he nominated Neil Gorsuch to the Supreme Court, in a huge triumph for originalist jurisprudence and a promising sign for anti-Roe Americans. His track record on other confirmed judicial appointments has been similarly without reproach. (Though these successes are arguably more attributable to Senate minority leader Mitch McConnell’s tenacity than to any skillful maneuvering on Trump’s part.)
The president signed legislation — passed under the Congressional Review Act — that allowed states to remove Title X funding from Planned Parenthood over its provision of abortion. Under the Trump administration, the Justice Department announced that it is formally investigating the abortion group for possible involvement in the illegal fetal-tissue-trafficking industry.
Like every Republican president since Ronald Reagan, Trump reinstated the largely popular Mexico City policy, which denies U.S. aid money to any international group that funds or promotes abortion. But he took the policy a step further, expanding it to cover nearly all U.S. foreign health spending, not just family-planning funds. The administration also moved to defund the United Nations Population Fund on similar grounds.
The Trump administration drastically expanded the religious and conscience exemption to the Health and Human Services Department’s contraception mandate, which had been added to the Affordable Care Act to require that employers provide employees with subsidized birth control….
www.nationalreview.com/article/455090/donald-trump-abortion-pro-life-victories-year-one

As mentioned, much more remains to be done of course, and we must not rest on our laurels here. A lot more action is still needed, as the article states:

Anti-abortion leaders have rightly been pleased with this progress. But pro-life Americans can’t forget the biggest punted promise of the last year: The government’s inability to defund Planned Parenthood. The Republican party has spent years promising — and failing — to remove federal funding from the abortion group. Congress passed a bill that would have defunded the group a few years ago, but it was vetoed by President Obama. There is no excuse for a similar failure this year, and the pro-life movement must continue to demand that the GOP follow through in the year to come.

Also noteworthy was the fact that for the first time at the massive pro-life rallies held in the nation’s capital every year at this time, a US president attended and spoke there. Here is part of what President Trump said at the 2018 March for Life in Washington D.C.:

Today I’m honored and really proud to be the first president to stand with you here at the White House to address the 45th March for Life, that’s very very special, 45th March for Life, and this is a truly remarkable group. Today tens of thousands of families, students, and patriots, and really just great citizens gather here in our nations Capitol. You come from many backgrounds, and many places, but you all come for one beautiful cause, to build a society where life is celebrated and protected and cherished.
The March for Life is a movement born out of love: you love your families; you love your neighbors; you love our nation; and you love every child born and unborn, because you believe that every life is sacred, that every child is a precious gift from God….
As you all know Roe versus Wade has resulted in some of the most permissive abortion laws anywhere in the world. For example, in the United States, it’s one of only seven countries to allow elective late-term abortions along with China North Korea and others. Right now, in a number of States, the laws allow a baby to be born [sic, aborted] from his or her mother’s womb in the ninth month.
It is wrong. It has to change.
Americans are more and more pro-life. You see that all the time. In fact, only 12% of Americans support abortion on demand at any time.
Under my administration, we will always defend the very first right in the Declaration of Independence, and that is the ‘right to life.’
Tomorrow will mark exactly one year since I took the oath of office. And I will say our country is doing really well. Our economy is perhaps the best it’s ever been. You look at the job numbers, the companies pouring back into our country, look at the stock market at an all-time high, unemployment at a 17-year low, unemployment for African workers at the lowest mark in the history of our country, unemployment for Hispanic at a record-low in history, unemployment for women, think of this, at an 18-year low.
We’re really proud of what we’re doing.
www.lifesitenews.com/news/full-text-president-trumps-historic-speech-to-march-for-life

One could never imagine such words being spoken by an Obama or a Clinton. Thus we have some real reasons to celebrate. The culture of death is by no means over in the US or elsewhere. It is deeply entrenched and will be defended to the death (no pun intended) by its militant supporters, including so many in the media, in politics and in academia.