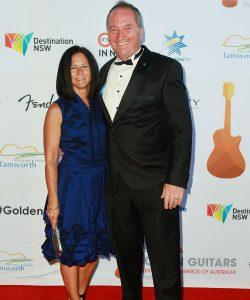 While the story is only a few days old, it has gotten plenty of media attention. One of the most recent pieces on this gives us the basics, as well as how Joyce seems to be seeking to defend himself:

Deputy Prime Minister Barnaby Joyce says he feels “incredibly hurt” that his private life has been thrown into the public arena. His comments, in an interview with the ABC’s 7.30 host Leigh Sales, have come after The Daily Telegraph reported Mr Joyce had moved in with his former staffer, 33-year-old Vikki Campion.
Mr Joyce, who has separated from his wife of 24 years and the mother of his four daughters, is now expecting a baby with his former employee. Mr Joyce told 7.30 he wanted to “make sure that private matters remain private”. “So it’s a private matter and I don’t think it helps me, I don’t think it helps my family, I don’t think it helps anybody in the future to start making this a public discussion. As much as I can I will keep private matters private.”
Mr Joyce’s wife, Natalie Joyce, issued a statement yesterday saying she feels “deceived and hurt” by her husband for starting an affair with a person who was his employee.
www.news.com.au/entertainment/tv/current-affairs/barnaby-joyce-on-relationship-with-exstaffer-i-want-private-matters-to-remain-private/news-story/fae961f57871c8f9da8329c4ec2412a3

Along with Joyce himself, many others are taking the usual line so often heard when such things explode in public: ‘this is a private matter and should stay that way.’ The claim is that it should not matter what happens in the private life of a politician or any other public figure. For example, one writer for the Australian said this:

Journalism is at its best when it exposes abuses of power, the misuse of public money, misconduct in office and there’s plenty of that going on without having to rifle through an MP’s undie drawer.
But if you insist on media coverage that focuses on the deeply personal and sometimes vulgar elements of an MP’s life, and God knows there is a huge appetite for this stuff, then understand we are headed down the American path where our politics really does become show business for ugly people.
www.theaustralian.com.au/opinion/show-business-for-ugly-people-no-thanks/news-story/5b9872e1ec3187872b55774c82b46166?nk=4eb9eec5ef94761caf7b0f3843fb713f-1518057643

Regrettably his is a very common response to these sorts of matters, and we expect it from secularists. But sadly we often get it from those claiming to be Christians as well. These are just some of the wrong responses they will throw at you:

There are plenty of these lame excuses being thrown around. But I beg to differ. Christians of all people should know better. And so too should conservatives, even if they are not religious conservatives. Character counts. Character matters. And simply put, the sort of person we are in private will always manifest itself in public. How can it not?

Twenty years ago I wrote a piece on this when another politician was involved in a sex scandal. I said in part:

The issue is not muckraking, or dragging up the past, or politicians being put under the spot light. A politician, like any public leader, should have certain standards. We expect that politicians bring many qualities to the job, among them, honesty, loyalty, commitment and faithfulness.
Character is all of one piece: something that affects the whole person, both private and public. What a person does in private tells us a lot about what that person will be like in public. If a person is willing to cheat on his wife for example, is it not possible that he will also cheat on the electorate?
This false dichotomy between private and public life just does not hold water. If a person is known for dishonest financial dealings with family and friends, surely that tells us how the person will act as a treasurer, bank manager or politician. If a person is known to be a chronic liar, surely that fact is relevant to whether that person should be voted for.
This is not a question of being judgmental and throwing the first stone. We all need to be judged, and self-judgment is the best place to begin. But a society that says a person’s moral condition has, or should have, no bearing on public life is asking for, and will get, trouble. One might as well dispense with the police, law courts and any other semblance of morality. All societies, and all individuals, need a moral code to survive. Moral anarchy may sound good in theory but is not possible in practice.
The bottom line in all this is the issue of integrity. Integrity still matters. Simply defined, integrity is the difference between what you say and what you do. Or put another way, integrity is what you do when no one is looking. Character counts, both in public and in private. And in a relativistic age such as ours, it matters even more.
Our real problems today are not economic problems. Nor are they political problems. Our real problems have to do with values, with character, with morality. A country can survive a current account deficit, but it cannot for long survive a value deficit. And the first place to begin in restoring this value deficit is to reaffirm character, integrity and morality, both private and public.
It is interesting to note that character was the only consideration enumerated by the American founding fathers as relevant to qualifications to serve in public office. A person’s politics, philosophy or ideology may be important, but the most important qualification is character. Without good character, good government is not possible. Indeed, more than one commentator has noted that morality, more than anything else, is the key to a healthy and lasting democracy. Politics skills can be learned, policies adjusted. But without character, a nation will soon flounder on the rocks of moral relativism.
We are seeing such an unravelling of the commonweal now. The need for leadership based on character and values is now our most pressing need. We need to recall the words of George Washington in his farewell address: “Of all the dispositions and habits which lead to political prosperity, religion and morality are indispensable supports.”
We have paid a terrible price in the false separation of morality from social problems. Australia’s (and America’s) rising tide of social pathology will only be reversed when we once again acknowledge that character and morality are not optional extras, but are the essence of civilised society.
billmuehlenberg.com/1998/07/04/character-and-public-life/

A few other things can be said about all this. First, as a Catholic and a political conservative, Joyce defended traditional marriage in the recent homosexual marriage debate. He was quite right to do so, making his transgression all the worse. Now we have hypocrisy to add to the list of shortcomings.

But to his credit, consider what also he did. I would guess that in at least 98 per cent of other such cases, the quick “solution” would have been to have the baby aborted. At least to their credit, the pair is not going down this path. For that we can be thankful. But it certainly does not excuse the sins of adultery, the breach of sacred marriage vows, the betrayal of trust, and other transgressions.

There is another matter worth noting. Consider the double standards at play here. Paul Zanetti recently posted this on the social media:

You won’t hear much from Labor and the Greens about Barnaby Joyce’s extra marital affair.
Labor
Bill Shorten – had an extra-marital affair with cute blonde Chloe Bryce 10 years ago – and got Ms Bryce pregnant while both were still married.
Tony Burke – had an affair with office staffer Skye Laris while married to Cathy Bresnan with kids.
Bob Hawke – had an affair with Blanch d’Alpuget while married to Hazel – while he was PM.
Greens
Nick McKim – had an affair with married staffer Cassy O’Connor while her husband artist was at home keeping the home fires burning and raising their 4 kids. McKim’s affair ended up breaking up the young family.
There are lot of shout-outs that Barnaby Joyce should resign.
Yet, Shorten, Burke and McKim are still there.
If we apply the ‘resign’ principle to all of parliament – and the press gallery – Canberra would be a ghost town.

Yes the double standards here by the left side of politics, and by the left-leaning mainstream media is sickening. But aside from all that, what Joyce did is wrong. From a Christian point of view, it is sinful, and genuine repentance is the only way forward to deal with this mess.

Another obvious Christian lesson is this: As the Bible says, “be sure your sin will find you out” (Numbers 32:23). Sexual sin especially always has public consequences. And what we try to do on the sly will usually come back to bite you. And even if no one finds out what you have done, God knows all about it.