There is some great news for a change coming out of America at the moment. A court case concerning religious freedom has actually gone the way of conscientious Christians over against militant homosexual activists. While this ruling has not resolved all questions about such matters, it is a terrific first step for the vital importance of freedom of religion.

The background to the case is this: back in July 2012 two homosexuals, Charlie Craig and David Mullins of Denver, visited Masterpiece Cakeshop in Colorado to buy a custom-made wedding cake. The homosexual couple had intentionally targeted this business, knowing that the owner was a devout Christian.

Jack Phillips, the owner, refused his services when he was told the cake was for a homosexual wedding, citing his religious convictions. The state civil rights commission sanctioned Phillips after a formal complaint from the couple. On December 5, 2017 the US Supreme Court began the case, Masterpiece Cakeshop v. Colorado Civil Rights Commission.

Phillips had sought an exemption from Colorado’s civil-rights law, which prohibits public businesses from discriminating based on sexual orientation. He argued that this was about whether the government can “compel artists to create expression that violates their sincerely held religious beliefs about marriage.”

As he said in December of last year: 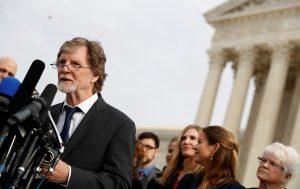 We don’t have to agree on questions of sexual morality. But what we should be able to agree on is our freedom, to live out our most important ideals. What I didn’t say was that I wouldn’t sell them a cake. I’m happy to sell a cake to anyone, whatever his or her sexual identity. People should be free to make their own moral choices. I don’t have to agree with them. But I am responsible for my own choices. And it was that responsibility that led me to decline when two gentlemen came into my shop and invited me to create a wedding cake for their same-sex ceremony….

What a cake celebrating this event would communicate was a message that contradicts my deepest religious convictions, and as an artist, that’s just not something I’m able to do, so I politely declined. But this wasn’t just a business decision. More than anything else, it was a reflection of my commitment to my faith. My religious convictions on this are grounded in the biblical teaching that God designed marriage as the union of one man and one woman.

Obviously, not everyone shares those convictions. I don’t expect them to. Each of us makes our own choices; each of us decides how closely we will hold to, defend and live out those choices. The two men who came into my shop that day were living out their beliefs. All I did was attempt to live out mine. I respect their right to choose and hoped they would respect mine. They did not. And, considering all of the hate mail, obscene calls and death threats my family has received since I was sued, a lot of other people don’t see tolerance as a two-way street, either.
www.usatoday.com/story/opinion/2017/12/04/supreme-court-masterpiece-why-jack-phillips-wont-custom-design-cakes-same-sex-weddings-column/917631001/

The Supreme Court decision has just been handed down. In a 7-2 decision, it sided with Phillips over against the Civil Rights Commission of Colorado. Justices Ruth Bader Ginsburg and Sonia Sotomayor dissented. This ruling has a narrower focus on the situation in Colorado, and a broader ruling on related matters must wait.

As Justice Kennedy of the majority decision put it, similar cases may be decided differently in the future. As to this case he wrote:

The reason and motive for the baker’s refusal were based on his sincere religious beliefs and convictions. The Court’s precedents make clear that the baker, in his capacity as the owner of a business serving the public, might have his right to the free exercise of religion limited by generally applicable laws. Still, the delicate question of when the free exercise of his religion must yield to an otherwise valid exercise of state power needed to be determined in an adjudication in which religious hostility on the part of the State itself would not be a factor in the balance the State sought to reach.

The Commission’s hostility was inconsistent with the First Amendment’s guarantee that our laws be applied in a manner that is neutral toward religion. To Phillips, his claim that using his artistic skills to make an expressive statement, a wedding endorsement in his own voice and of his own creation, has a significant First Amendment speech component and implicates his deep and sincere religious beliefs.

Near the end of the decision we find these words:

States cannot punish protected speech because some group finds it offensive, hurtful, stigmatic, unreasonable, or undignified. “If there is a bedrock principle underlying the First Amendment, it is that the government may not prohibit the expression of an idea simply because society finds the idea itself offensive or disagreeable.” Johnson, supra, at 414. A contrary rule would allow the government to stamp out virtually any speech at will. See Morse v. Frederick, 551 U. S. 393, 409 (2007) (“After all, much political and religious speech might be perceived as offensive to some”). As the Court reiterates today, “it is not . . . the role of the State or its officials to prescribe what shall be offensive.” Ante, at 16. “‘Indeed, if it is the speaker’s opinion that gives offense, that consequence is a reason for according it constitutional protection.’”

The full 60-page decision, including the dissenting view, can be found here: www.foxnews.com/politics/interactive/2018/06/04/supreme-court-ruling-in-colorado-bakers-case-read-decision.html

This is a very important decision indeed, and the fallout of it will be enormous. Late last year Ben Shapiro wrote about the importance of this case:

The case is a seminal one for religious liberty. It pits the ability of local and state governments to enforce “anti-discrimination law” against religious practice rights for business owners; it essentially decides whether or not religious people can practice their religion in their business. This goes to the heart of freedom of religion in the United States.
www.dailywire.com/news/24267/one-most-important-cases-recent-supreme-court-ben-shapiro

Or as David Harsanyi said in a piece from last September:

For various reasons, including the media’s simplistic should-we-allow-people-to-discriminate coverage of these kinds of stories, most people seem to be unable to comprehend that this is about a lot more than supposed “discrimination.” Phillips doesn’t want to be forced to endorse the ceremony any more than I as a Jew would want to be forced to write a column praising the greatness of a Scientology.
This isn’t some phony cult concocting a new doctrine. Millions of Christians hold some form of a genuine, centuries’-long religious conviction that prohibits them from celebrating gay marriages. If you still support state coercion against them, then we might as well concede that religious freedom and true freedom of expression aren’t compatible with our new conception of a contemporary society. So the question is: Does the average American really believe society has a right to demand that a person paint or write novels — or make cakes — that celebrate acts that undermine their beliefs? It might be too late for his business, but Phillips’ case will go a long way in letting us know the answer.
thefederalist.com/2016/09/06/how-a-cakemaker-became-an-enemy-of-the-state/

Today many are cheering this outcome. Jim Daly, president of Focus on the Family, said he was “delighted” with the ruling: “No one should be forced to violate their faith in order to earn a living, and Jack, who I’ve met and consider a friend, just wants to be free to live out his faith in his chosen profession.”

And Attorney Michael Farris, president of the Alliance Defending Freedom which represented Phillips, said that he was “ecstatic” at the decision. He said: “Justice Kennedy has held that tolerance is a two-way street, and Jack Phillips was not tolerated by the Civil Rights Commission of Colorado.”

It is said that Phillips “refused to serve” Mullins and Craig. That’s not true. He offered to sell them any item in the store. He would have even sold them a wedding cake. The only thing he would not do — could not do – was customize one. So, the gay men could have simply purchased a standard wedding cake. Or they could have left the store and gone to literally any other bakery in the state. Decent human beings would select either of those two options. But Mullins and Craig are not decent human begins. They opted for option three: set out on a years-long process to utterly destroy Jack Phillips, take down his business, and impoverish his family. They failed. Praise God they failed.
www.dailywire.com/news/31408/walsh-gay-couple-masterpiece-cakeshop-case-matt-walsh

The words of David French are well worth concluding with:

This is a severe blow to the state. It hoped for a ruling declaring that the cake wasn’t protected expression and a free-exercise analysis that simply ratified the public-accommodation law as a “neutral law of general applicability.” Such a ruling would have permitted the favoritism on display in this case. It would have granted state authorities broad discretion to elevate favored messages and suppress dissent, all while operating under the fiction that they weren’t suppressing protected expression or religious exercise.

Instead, civil-rights commissions now have to understand that restrictions on religious bakers will carry with them the same implied restrictions on secular bakers, and the protections given gay customers will extend on an equal basis to religious customers. In other words, the Court not only prohibited favoritism, it imposed a high cost on censorship.

No, the Court did not issue the sweeping free-speech ruling that many advocates hoped for and others feared. Instead it issued a ruling that reminded state authorities that people of faith have the exact same rights — and are entitled to the exact same treatment — as people of different faith or no faith at all. And it did so in an opinion that decisively rejected the exact talking points so favored by the anti-religious left.

The Lord works in mysterious ways, and it is no small irony that the same justice who just struck a blow for the dignity of the faithful is also the man most responsible for creating the constitutional right to same-sex marriage. State bullies beware, when Justice Kennedy declared in Obergefell that the First Amendment still protects religious people as they seek to teach and uphold those “principles that are so fulfilling and so central to their lives and faiths,” he meant what he said. Tolerance, it appears, is not a one-way street.
www.nationalreview.com/2018/06/masterpiece-cakeshop-ruling-religious-liberty-victory/

11 Replies to “A Massive Win for Religious Freedom”