OK, another thirty days of prison time for daring to think independently of the Facebook thought police has just come to an end. But I might as well save this article. The way things are going, I will have to post it often. As soon as I get out of FB gulag, they seem intent on throwing me right back in there.

I am obviously a targeted man. FB obviously has it in for me. They obviously see me as a threat to their militant secular left agenda, and they will NOT allow contrary points of view to get much of a hearing, especially if it is reaching a large amount of people. 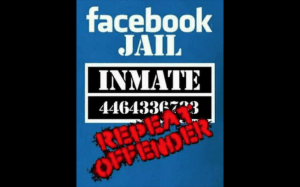 And I am not alone in this, as countless other conservatives and Christians have been targeted. Not only that, but those seeking to share my stuff also seem to be targeted. I have had various folks telling me during the past month that they are being blocked by Fascistbook from sharing my stuff there. But thanks to those who have tried. Please keep at it!

Oh, and some folks seem to think it is all my fault that I keep getting sin-binned. They think if I was nicer, or less controversial, or more congenial, or less political, I would be just fine. Um no. Such folks may not be up on how FB actually functions.

They do NOT like Christians and conservatives. If I never shared another post on “controversial” issues, FB would still get upset if I shared biblical truth. Recall that Paul speaks about the offense of the gospel. It IS offensive, full stop!

So Muslims, atheists, cultists, secular humanists and others will all take offence at a FB post on the biblical gospel. And I do not hold to a truncated and reductionist gospel anyway. The gospel must include the hot potato issues of the day.

How is God’s intention for human sexuality or the sanctity of life not a gospel issue? So yes, I will keep writing and posting on those things. I will not just put up pictures of my cat or what I ate for breakfast. Truth matters, and I am under obligation to share it far and wide.

Given all the grief and misery I experience with these constant bans and sinbins from FB, one might ask, why bother? Indeed, every time I get thrown into FB prison on some trumped-up charge – although FB never actually tells me what I did wrong! – folks will come and ask me why I continue being on it.

‘Why not just give them the flick?’ ‘Why not say no to this censorious, leftist outfit?’ ‘Why not just wipe the dust off my feet and leave?’ Good questions, but there are in fact some good reasons why I am there – and on other social media sites. First and foremost, people need to hear the gospel.

We are commanded to go into all the world and preach the gospel. And with new technologies like the internet and the social media, we can potentially reach millions of people with a click of a button. So all believers should use these things to share God’s good news.

Second, truth matters. It is about seeking to share truth wherever and however I can. It is called seeking to be salt and light. I have many FB friends who can be reached, and they have many FB friends that can also be reached if they share my stuff. So potentially tens of thousands of people – if not more – can be reached with biblical truth and other important issues by using the social media – even the bigoted FB.

Most importantly, I am there as part of my calling and ministry. CultureWatch is what the Lord had directed me to be involved in, and sharing the truth found there to as many people as possible is part of that calling. I don’t do it because I get my jollies out of it, or because I have nothing better to do. I am there because it is where God wants me to be.

So I will keep using it until I am finally given the boot. Christians of all people should use whatever licit means we can to share not just the truth of the gospel, but to challenge the lies of the secular culture. So that I shall do. Getting the word out – on so many issues – is imperative, especially, since the mainstream media refuses to do so.

Some argue it is just a pagan site. Is it “ungodly”? Sure, but so is almost all the social media and the rest of the media. So too are the bulk of those we deal with in society. Most supermarkets, gas stations, banks, restaurants and department stores are run by ungodly people as well.

What of it? Unless we just live in a cave somewhere and have zero impact on others, we have an obligation and a Christian calling to share truth and to be light in a dark world. So that is why I am on FB. That is why I will continue to use it and other platforms as long as I am able to.

As to my recent bans, several of them were due to me being part of some other page, and some other persons’ posts seemed to upset FB, so I was made to pay the price as well. Most recently my “crime” involved a George Soros meme. I explained that jailing a month ago in this article: billmuehlenberg.com/2018/10/30/facebook-gulag-yet-again/

Thankfully some of you came out to help me when word of this first got out. For example, the American champion Robert Gagnon again came to my aid on FB and mentioned my jailing. His post is found here:
www.facebook.com/robert.a.gagnon.56?__tn__=%2CdlC-R-R&eid=ARD5BDNV08KJS3iAhkNczKoMyvarobPqyNcT-NBE3OIX9m3dLkToPR2Swfh6DTXwhKNb9H1r9-ECsroa&hc_ref=ARQWdmbISo_Nfkp7GY1jqWdUScpWs4aOxJAYxB1_uJjaKeW_V1WKWW97rO3m8-hzweA

As I asked folks to share on his page back then:

Not seeking to belabour all this, but concerning the issue of an address on FB:
A) I said in my piece that I have no clue if that IS the actual address of Soros;
B) I also said I have seen lefties post the addresses of conservatives with no FB repercussions;
C) Other folks have posted the very same Soros meme and they are still up!
D) If it WERE FB policy to automatically take down all posts with an address, then how do we account for B and C above?

Many thanks to all of you who helped out, and shared my stuff on FB on occasion. Some of you now and then shared some of my stuff for which I am so very grateful. And there were some real important issues I wanted to get out there, including speaking engagements of mine, the US midterm elections, and of course the Victorian state election.

All these things were rather important indeed, but I could do nothing about sharing anything on them. Only if you shared my stuff could I get the word out. So a million thanks to those who did. You may have been very few in number, but your assistance is greatly appreciated.

One person has to be singled out however. As with my previous lengthy jail terms, this champion from South Australia not only shared my stuff every single day, but usually shared my stuff, 3 or 4 times a day! What a superstar. You were my lifeline and my greatest asset during my time of incarceration. Bless you Kerry!

As I often say, folks will not know just how frustrating and discouraging it is when you desperately want to share something but cannot. It is so good to have others help you out during those times. I will certainly repay the favour if and when you guys get chucked into FB Siberia.

Somewhat sadly however, I suspect that 90% of my FB friends did not even know I was in FB prison! And it continues to be all rather frustrating when folks there really do not know how such jailing works. Let me repeat: I cannot do anything when I am in jail. I can respond to nothing.

Yet over and over again I will get FB friends sending me private messages, asking me questions, etc. Um, folks – wakey wakey! I can NOT answer you. I can NOT reply to you in any way. I can read your stuff but that is it. So do not think I am being rude or something because I have not responded to your messages. I simply CANNOT respond while in FB jail.

I did discover however during this most recent imprisonment that I can still do two things. One, if you want to share something of mine, and you tag me in it, then it seems I can allow that post to get posted onto my page. So if you share an article of mine from CultureWatch, or something I wrote on MeWe, please tag me in it, then I can click and have it appear on my FB page.

Second, I discovered I can still accept friend requests. So after checking out someone’s request, if I deem them to be trustworthy and not a troll, I can add them to my list of FB friends. But you will have to wait of course until I am freed from jail before I can respond to you in any way.

So, I am back on FB – for now. I cannot even guarantee that by the time you read this I will still be there. It certainly seems that my days there are numbered. That is why I keep pleading with you all to get on to at least one other social media site, such as MeWe. That way if you or I are permanently banned from FB, we can still connect, we can still communicate, and we can still share truth.

My FB friend Peter LaBarbera of Americans for Truth About Homosexuality has recently had his page exposing the homosexual agenda pulled by Fascistbook. You can read about that here: www.lifesitenews.com/news/facebook-deletes-americans-for-truth-about-homosexuality-page-on-vague-hate

All of us who dare to speak truth are in the same situation. Indeed, at the moment I am a marked man. I am a FB recidivist. I am a repeat offender in their eyes. But soon enough I will likely be banned altogether – permanently. So if you again hear nothing from me in the next few days, you will know of my fate.

If you do come to visit me in prison make sure you have hacksaw blades embedded in the cakes you bring me thanks!