The ever-growing field of Democratic hopefuls for the 2020 US presidential election shows no signs of abating anytime soon. And the many contenders are stumbling over each other to see who can be the most leftist of the lot. In an already crowded field of look-alike candidates, they gotta do something to try to stand out. And it seems they have all decided to do pretty much the same thing: to try to pretend how different they are!

And that is mainly being done by pushing as many leftist hot buttons as possible. Thus things like socialism in all its forms (free health care, free education), abortion on demand, and the like are on the lips of most of them. Another big-ticket item is reparations for slavery and apologies to Blacks for past wrongs. 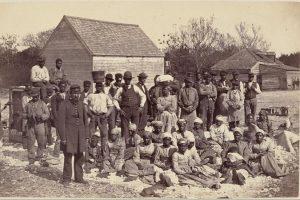 How are we to think of things like race-based reparations? Are they good ideas, moral ideas, sensible ideas? To set the stage, let me offer to you a hypothetical. Suppose that my great-great-great grandfather stole a hunting rifle from your great-great-great grandfather. Should I now be forced to apologise for that and pay you for the stolen goods? Um, I did not steal anything, and you did not have anything stolen from you. So how do we proceed?

But let me point out that there are other calls for apologies for past wrongs, such as apologising for the Crusades. I have written about that elsewhere, so I urge you to have a read of this piece, since so many of the concerns related to that also relate to the US slavery debate: billmuehlenberg.com/2008/12/15/i%E2%80%99m-sorry-for-what-somebody-else-did/

Similarly, Australia has had national sorry days and the like. That too I have previously discussed: billmuehlenberg.com/2008/02/09/on-saying-sorry/

So there has been plenty of this going on already. And the calls seem to be never ending. Consider just one such recent example – this time from Europe:

“A few days ago, the new president of Mexico, Andres Manuel Lopez Abrader, demanded that King Felipe VI ask for forgiveness for the conquest by Spain, and now a mosque in Seville is doing the same but for the Reconquista (the Reconquest, when the Muslim rulers were driven out of Andalusia-Spain).”
voiceofeurope.com/2019/03/muslim-leader-wants-spanish-king-to-apologise-for-defeating-islam-in-1492/

All sorts of aggrieved groups, along with the left in general, are keen to call for ever more things from the past that must be apologised for, if not compensated for. Whether the demands for amends are by means of a payment or some other compensation, we seem to have a never-ending list of ‘evils’ that the West – and people in the West – must now atone for.

But let me return to the renewed calls in the US for reparations for slavery. Democratic hopefuls such as Elizabeth Warren, Cory Booker and Kamala Harris are now strongly pushing this – or at least for a major debate on it. But is it really such a good idea? I don’t think so. Let me first look at some political, social and economic reasons, and then look at some possible biblical concerns in Part Two.

A number of issues arise here. Indeed, there are just so many questions that can be raised – and they all need some very careful answers. Here are just some of them:

It seems this simply opens up a Pandora’s Box. Once we go down this path, every other aggrieved group around – whether the complaint is real or imagined – will be demanding their own reparations. It seems there will be no end in sight, and soon enough the main consequences of this will be a government that has simply gone broke.

Indeed, “University of Connecticut professor Thomas Craemer recently estimated that reparations would cost the country between $6 trillion and $14 trillion.” www.vanityfair.com/news/2019/04/2020-democratic-candidates-on-reparations

The same article says this:

The likelihood that reparations would ever become official remains slim, with even prominent leaders in the black community calling the idea nearly impossible to implement. “You’ve got to satisfy two problems, one of which is the legality of it and the other is the practicality of it,” argued Majority Whip Jim Clyburn in an interview with The Hill, pointing out, for instance, the question of whether mixed-race descendants of slaves had intangible advantages over their counterparts.

But my illustration of the stolen rifle is a key issue here. What do we do about crimes and wrongs that happened so long ago? We do have such things in our law as statutes of limitation. As one online definition puts it:

A statute of limitations is a law passed by a legislative body in a common law system to set the maximum time after an event within which legal proceedings may be initiated. When the period of time specified in a statute of limitations passes, a claim might no longer be filed, or, if filed, may be liable to be struck out if the defense against that claim is, or includes, that the claim is time-barred as having been filed after the statutory limitations period.

Um, slavery ended in the US a century and a half ago. The American Civil War (1861-1865) effectively ended it, and the Thirteenth Amendment (December 1865) formally ended it. So we are talking about something from over 150 years ago. How far into the past can we go as we seek to say sorry for certain things, at least in terms of compensation and the like?

Columnist George Will looks at this and related matters and says this:

If reparations are owed to the descendants of all members of minority groups that experienced protracted discrimination, the Irish can apply, citing the widespread practice of employers posting admonitions that “Irish need not apply.” Italians, too: An 1895 advertisement seeking labor to build a New York reservoir said whites would be paid $1.30 to $1.50 per day, “colored” workers $1.25 to $1.40, and Italians $1.15 to $1.25. Asians on the West Coast were subject to severe discrimination and violence. And Jews were restricted from acquiring the momentum that elite universities impart on the path to wealth.

Native Americans and African Americans experienced uniquely severe injustices. However, there must be some statute of limitations to close the books on attempts to assign guilt across many generations to many categories of offenders (racial, ethnic, class). How does one compute the compensation that can justly be extracted from persons who, although they participate today in the national prosperity to which slaves involuntarily made substantial contributions, had no participation in the injustices inflicted?

It is also true that the nation as a whole was injured by the exclusion of African Americans’ talents from American dynamism, both before and after hundreds of thousands of white Union soldiers were killed or maimed — should their descendants be exempted from paying reparations? — in the Civil War that ended slavery. But, then, semi-slavery survived for almost a century in Jim Crow laws after the end of Reconstruction.

If, however, you doubt that American discord can become much worse, try launching a scramble among racial and ethnic constituencies to assign varying degrees of guilt to others for varying degrees of injuries. Should reparations be means-tested, making affluent African Americans ineligible? To avoid using moral micrometers to measure guilt and injuries, should lump sums (taken from whom? by what mechanism?) be awarded to groups? Does it matter that 3.1 million African Americans identify themselves as of mixed race? Or that in the 2010 census, 1.8 million people self-identified as both white and black? Who would administer reparations? And at what cost to social harmony? Racial preferences (“affirmative action”) remain broadly unpopular after more than 50 years (the Philadelphia Plan to integrate building construction unions began in 1967).

And which African Americans shall count when counting for purposes of reparations? In 2005, the New York Times reported that since 1990, the average annual flow of immigrants from Africa — about 50,000 — had been more than came in chains in any of the peak years of the trans-Atlantic slave trade.
www.nationalreview.com/2019/03/slavery-reparations-democratic-party-politics-elizabeth-warren/

And recall my question about who will get stuck paying for all this. There can be only one answer: taxpayers – whether they like it or not. As Black American economist Walter Williams rightly says:

Punishing perpetrators and compensating victims is not what reparations advocates want. They want government to compensate today’s blacks for the bondage suffered by our ancestors. But there’s a problem. Government has no resources of its very own. The only way for government to give one American a dollar is to first — through intimidation, threats and coercion — confiscate that dollar from some other American. Therefore, if anybody cares, a moral question arises. What moral principle justifies punishing a white of today to compensate a black of today for what a white of yesterday did to a black of yesterday?
www.washingtonexaminer.com/the-truth-about-slavery-reparations

Yet some folks will look to other, more recent forms of reparations and argue that we have done it before, and we should do it again. Consider the 100,000-plus Japanese-Americans who were interred during the Second World War. In the 1970s and 80s they did receive financial reparations as well as government apologies.

But this is a case of apples and oranges. Current victims might be one thing – but long dead victims are quite another. As Richard Epstein points out: “But there, the payments were made to specific persons who were direct victims of wrong by the government. No program that seeks to remedy the wrongs of the past 350 years could hope to duplicate that level of precision.”
www.hoover.org/research/case-against-reparations-slavery

A major philosophical and moral point about all this has to do with fairness and justice. Why do I today need to cough up my hard-earned money for something I never did, and for something that happened long ago? As one short but to the point quote puts it, “Why should people who never owned slaves give money to people who were never slaves?”

That is a very good question indeed. But by way of summary, this 2-minute video featuring another Black economist, Thomas Sowell, may be the best, briefest and brightest answer available to the demand for national reparations: www.youtube.com/watch?v=vweIVidzETU

Christians should also be quite concerned about such matters, so Part Two of this piece will look at related matters to the debate: billmuehlenberg.com/2019/06/15/reparations-for-slavery-biblical-and-theological-considerations/

5 Replies to “Reparations For Slavery – Social and Political Considerations”