There can be no more obvious example of a monumental David v Goliath battle than that of Christian rugby player Israel Folau v the rainbow militants, most of the media, corporate bullies like ANZ, Qantas, HCF and Rugby Australia, and even deluded and clueless Christian critics.

A mere mortal would have long ago crumbled under the pressure. He would have simply given up, and we would be hearing nothing more of this story. But Folau has been resolute, courageous and full of faith as he has stood against all these Goliaths. As Lucas Rosas has recently written:

Israel Folau is one of the bravest men in Australia. While countless so called “conservatives”, “libertarians” and even so-called men of faith have bowed, scraped and apologised before the leftist establishment whenever they demanded it Folau has stood tall. Yet for some on the so-called “Right” this hasn’t been enough. They whinge and bitch and whine about “contracts” and “private companies”. Such grovelling worms need to understand one thing; if they can take down a multi-millionaire rugby player for repeating what has been Christian orthodoxy for two millennia there is absolutely nothing to stop them doing the same to you. If they can get a high profile sportsman fired, cut off his efforts to fund his own defence and even go after his wife for not condemning her husband what do you think they can do to you?
https://www.theunshackled.net/rundown/either-stand-with-folau-now-or-youre-next/ 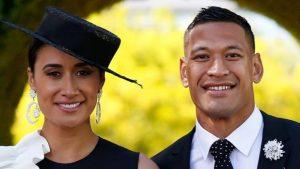 Absolutely – he gets it perfectly. It is a real pity that so many compromised and carnal Christians don’t. I have dealt with many dozens of these modern-day Pharisees. They sit in their easy chairs, doing absolutely nothing to share the gospel or stand up for religious freedom, yet they happily condemn Folau and the ACL, etc.

They prove by their words and their actions that they are on the side of Goliath. They have declared war on David, and have simply sided with the enemy. And even worse are all the Christian leaders and pastors who have either remained completely silent on this, or even sided against Folau!

I even heard of one church denomination ethics board that said they still do not have an opinion on the case, even after months of deliberation on it! Are these guys for real? If they have no clue where to stand on this case, it may be time for them to find a new day job.

And of course we have had so many Pharisaical leaders sitting in judgment on Folau. They have taken on the role of judge, jury and executioner. Yet many of these same armchair critics and big-time leaders would be the first ones to scream, “It is never right to judge anybody”!

I have written before about these critics, and they ought to be ashamed of themselves. See here for example: https://billmuehlenberg.com/2019/04/15/folau-and-the-fallout/

In stunning contrast to these so-called Christian leaders, we have had one atheist or agnostic after another rallying to Folau’s defence, or those who certainly do not parade their faith in public. Think of Alan Jones and Mark Latham and Andrew Bolt and Rita Panahi and Janet Albrechtsen and Paul Murray for starters.

They all seem to get it. They all seem to see the bigger picture here. They all know just what is at stake if Folau loses. We even had hyper-atheist Peter Singer doing this! See my writeup here: https://billmuehlenberg.com/2019/06/23/the-haters-and-bigots-are-still-after-folau/

I like what my good friend Ewan McDonald said recently on the social media:

It takes a rugby player to say what the church won’t. One reason Israel Folau’s social media comments had the national impact they did, is because he said something publicly that is rarely heard from pulpits today. Preaching against sin has gone out of favour in the modern church, let alone preaching against the sin of homosexuality. Folau’s comments were unremarkable in themselves but what made them remarkable is that he actually said them. To a nation unaccustomed to hearing Biblical truth uncomfortably applied, Folau’s bold comments were a shock. They shouldn’t have been if the church was doing its job.

Absolutely Ewan. While the usual suspects are hating on Folau, and many carnal and clueless Christians, it seems the masses know better. The $2.2 million raised by 20,000 people for Folau’s legal battles in just two days is proof of this. And we know that many of these donors were not even Christians nor rugby fans. They simply got it: today it is Folau, tomorrow it will be them.

This is about all of us. Yet the Folau-haters and the cowardly Christian critics do NOT get it. So let me once again deal with a few of the persistent myths concerning this case:

Broken contract? Um, no. There was nothing in his contract demanding that he renounce his faith and not share his faith when outside of work. Instead we had a supposed violation of the Rugby Australia Code of Conduct, that he somehow put the game into disrepute – whatever that means.

Let him pay his own way. This is madness. No one should have to pay a penny to be able to exercise religious freedom in Australia. And this can cost heaps, especially given all the corporate heavyweights arrayed against him. And RA receives millions of dollars every year from us taxpayers. Dieuwe de Boer nails it:

He’s spent over $100,000 of his own money, and while he might have millions in assets, he probably doesn’t have $3M in liquidity. Legal fights are expensive and can be endless drains, so this is why he really does need the money. If he funds it himself, even to the tune of millions, then his opponents can bleed him dry. With thousands of happy customers to share the risks, Folau will be a juggernaut that Rugby Australia and the media elites know they can’t beat. The case will likely go all the way to the Australian High Court and set a legal precedent about whether Australians can be fired for quoting the Bible.
https://www.rightminds.nz/articles/why-you-should-invest-israel-folaus-war-chest

And as law professor Patrick Parkinson has said, this case has been mishandled from the very beginning by RU:

The issues raised by this saga are profound and far-reaching. If employers can control the expression of your views and beliefs in situations unconnected to your workplace, what freedom will Folau’s greatest critics have in the future? Will someone be able to be sacked by a conservative employer for expressing a point of view on social or political matters contrary to the views of the Board of Directors?

Rugby Australia’s greatest mistake has been overreach. The fact is that rugby players are not chosen to represent NSW or Australia because of their virtues, their wisdom or their theology. They are chosen because of their abilities on the field, not their personal opinions expressed off it. In this regard, Rugby Australia’s problems about consistency have just begun. Will it dismiss a player who argues that immigration from Islamic countries should cease? Will it dismiss a player who posts angry and disrespectful social media posts against climate change deniers?
https://www.abc.net.au/religion/the-israel-folau-case-has-been-mishandled-from-the-start/11253210

Give the money to the poor! I have already dealt with this fallacy. Um, why not do both? Why force on us into this false dilemma? Why can’t people decide for themselves where they give their money? These Pharisees should just butt out. It is none of their business how I and others spend our money.

Indeed, when these Christian critics who side with Goliath push this nonsense, why am I reminded of Judas who demanded the very same thing? Thankfully Jesus put him in his place, and I think he would do the same to these modern-day Judases.

We must stand for inclusion and tolerance. Yeah right. I will believe it when I see it. Insurance giant BHF said this as they targeted his wife Maria: “There is no place in our society for discrimination of any kind, including on the basis of gender, religious belief, age, race or sexual orientation.” And GoFundMe said this: “we do not tolerate the promotion of discrimination or exclusion”.

Good grief. In the name of anti-discrimination and inclusion these bigots have blatantly discriminated against Folau and excluded him. Double standards much? Rank hypocrisy much? Who in their right mind would pay any attention to these frauds?

As I write this piece Folau is at the Fair Work Commission seeking an apology from RA. We will see how things turn out. In the meantime, his interview last night with Alan Jones is a must watch. The 19-minute video needs to be viewed and then shared far and wide. Please do. You can see it here: https://www.skynews.com.au/details/_6052884328001

I for one will stand with Izzy and against all the diabolical Goliaths who are out to get him. We all need to pray for this case and do what we can to support Folau. If he loses, we all lose.

31 Replies to “If We Don’t Stand With David, We Will Be Slain By Goliath”