When you find offensive and deplorable content on the media, do you do anything about it? You should!

Those who despise our pro-faith, pro-family and pro-life values are ever at work. They are relentless in pushing ungodly and immoral agendas. And for the most part they keep on winning. Why? Mainly because we are doing nothing about it. We just sit back and watch the carnage all around us.

As long as we remain silent, the other side will keep on winning. It is time we start fighting back. And by that I mean getting off our backsides and actually doing something. That does not mean throwing bricks, blockading buildings, or attacking and shouting down others – as the militant left routinely does – but getting active. 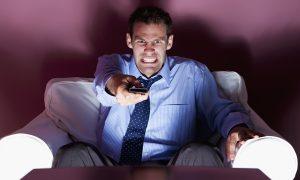 In other words, don’t just get angry – do something! And there are plenty of things we can do. I am often asked what one person can do, and I tell them there is heaps they can do. Consider these five articles for a number of practical pointers:

So there is a wide array of things that anyone can do. We can all pray of course. But we can also share information, alert others, write letters to newspapers, contact politicians, get on talk-back radio, etc. Sometimes we may need to spend a few minutes in composing a letter or formulating a petition.

And it may take a bit of internet searching if you want to send in a complaint to a company, or share your concerns with a business or political leader. Sending an email or making a phone call will also take a small bit of your time. But it is all worth the effort. Let me offer a few practical examples here.

Most of you have televisions, and most of you watch them. Have you ever viewed an ad or a program that really upset you? Well, what did you do about it? Anything? Did you just get angry but then go back to business as usual? Getting ticked off by stuff on TV but doing nothing about it helps no one, and simply makes the problems get worse.

There are currently two TV ads running that really have bothered me. In both cases I sought to make a stink about it to the companies involved. One I was able to track down some contact details for, so I sent them an email letting them know what I thought of their appalling ad. The other did not seem to have an easily discoverable means to contact them.

As to the first: it seems that every second TV ad shown nowadays features homosexuals and even trans characters. While in real life they make up around 1-2 per cent of the population, based on these ads (and shows) you would think they are in the overwhelming majority.

Thankfully most of the ads with homosexual characters have not resorted to ramming images of them kissing down our throats. But I just recently saw a new McCain’s ad which does. You can see it here: www.youtube.com/watch?v=EoQlAWBKTzg&fbclid=IwAR2EpHGDMIi_RaGi8rtLz8ij1OsjWdtKJkbMvZiGytZGtSdHIFEKYNAa8kc

It pushes the ‘families are anything you want them to be’ baloney, and features two men kissing. I mentioned this on the social media and urged folks to do two things: One, please stop buying their products, and Two, take the time to complain to them. Their contact page is here: mccain-anz.secure.force.com/mccainanz/ComplaintsProEnquiry

Sadly it seems the progressive secular lefties at McCain have been pushing the radical homosexual agenda for a while now: www.newnownext.com/mccain-lesbian-couple-ad/02/2018/

Some of the folks on the social media did follow up on my plea, and a number of them did send in a complaint. And many said they will boycott their products. Well done! I suspect that if we can get enough people to make a stink, the powers that be just might get the message. If enough folks complain, and tell them they have stopped buying their products, the head honchos will feel the pinch – in the pocketbook.

They hate it when they are not making juicy profits, so just maybe they will reconsider offending folks with their terrible ads that are pushing radical and harmful agendas, and turning off so many people. But that won’t happen unless many of us are willing to act, and to actually do something.

Belong mobile also has a new set of ads out, celebrating – wait for it – diversity and difference! Um yeah, just what we need. So one of their more revolting ads features some guy with a beard wearing some frilly lingerie top. He waxes eloquent about how great diversity is, etc. You can see the lousy ad here: www.youtube.com/watch?v=JusHiWyfPL4

Sadly there seems to be no direct means to contact them to complain. Here is a generic page however: www.belong.com.au/contact-us

The truth is, these folks will continue to get away with these bad ads and all this activist social engineering because very few people will speak up and make a complaint. That has got to change. We have to get proactive here. Otherwise we will only have ourselves to blame as things in the media go down the sewer even further.

Let me finish with two further points. Often when I raise the issue of all the garbage that is being shown on television – whether on programs or on ads – various folks will say something like this: ‘Just don’t watch it,’ or, ‘Well, it doesn’t bother me – we got rid of our TV years ago.’

I always remind them that while that may be good for them, it is not seeing the bigger picture. Indeed, it is a bit self-centred. Yes, great, you are not getting exposed to all the filth and propaganda, but your neighbours are. In fact, it is likely your children are as well when they go to their friends’ houses, etc.

With moral and spiritual rot pouring into our homes 24/7, we all have a responsibility to see it cleaned up – at least somewhat. The community as a whole which we live in is being contaminated by all this stuff, so it does – at least indirectly – impact all of us. ‘Out of sight out of mind’ is just not sufficient here.

And one last point: if you do boycott a product or a service – great. But it is important that you tell them. Let them know why you are refusing to patronise them. Let them know that as long as they are pushing anti-faith, anti-family or anti-life values, you will NOT be doing business with them. If enough folks do this they may start to get the message and perhaps change their ways.

In sum, it is not enough to just get upset with all the rubbish that we encounter on the media and elsewhere. We need to start standing up and acting on this. If we don’t, things will just continue to get worse. I for one will keep fighting this stuff, if for no other reason than because I care about the sort of world my children are growing up in, and the world their kids will have to deal with.

So who will join me in the resistance?

34 Replies to “It Is Time We Start Resisting”