Two recent speeches by Trump and Morrison should give us all encouragement:

At a time when all of the West is seemingly disintegrating before our very eyes, more than ever we need strong leaders who will stand up for their own nations and not bow down to various internationalists who seek to replace national sovereignty with forms of coercive globalist statism.

The EU is one obvious example of the latter, as are various forms of UN globalism. Brexit was a clarion call by the British people to allow the nation state, not unelected bureaucrats from afar, to determine the future of the UK. So too were the elections of Trump and Morrison. 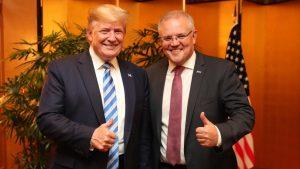 The globalists hate the Brexiteers, they hate Trump, and they hate Morrison. All the more reason to support folks like Boris Johnson and the other two. And the US and Australian leaders have recently given speeches standing up for national sovereignty. Both are worth looking at.

Australian Prime Minister Scott Morrison has previously given a speech at the UN in late September in which he insisted that Australia, not foreign international bodies, would determine its own climate policies, thank you very much. He continued that theme of national independence in a speech delivered on October 3 to the Lowy Institute think tank in Sydney. In part he said this:

As a politician, my instincts and passions have always been domestic. Despite my activity of the past year, I am not one who naturally seeks out summits and international platforms. But as Prime Minister you must always be directed by the national interest. As has been the case for Prime Ministers past, so much of Australia’s future right now is being shaped by events and relationships beyond our borders. Australia cannot be an indifferent bystander to these events that impact our livelihoods, our safety and our sovereignty. We must, as we have done previously, cultivate, marshall and bring our influence to bear to protect and promote our national interests….

We will continue to bring clear objectives and enduring values to our international engagement. Freedom of thought and expression … of spirit and faith … of our humanity, including inalienable human rights. Freedom of exchange, free and open markets, free flow of capital and ideas. Freedom from oppression and coercion, freedom of choice. These have never been more important. And they are under threat, not just from the direct challenge of competing worldviews, but the complacency of western liberal democratic societies that owe their liberty and prosperity to these values.

Australia does and must always seek to have a responsible and participative international agency in addressing global issues. This is positive and practical globalism. Our interests are not served by isolationism and protectionism. But it also does not serve our national interests when international institutions demand conformity rather than independent cooperation on global issues. The world works best when the character and distinctiveness of independent nations is preserved within a framework of mutual respect. This includes respecting electoral mandates of their constituencies. We should avoid any reflex towards a negative globalism that coercively seeks to impose a mandate from an often ill defined borderless global community. And worse still, an unaccountable internationalist bureaucracy.

Globalism must facilitate, align and engage, rather than direct and centralise. As such an approach can corrode support for joint international action. Only a national government, especially one accountable through the ballot box and the rule of law, can define its national interests. We can never answer to a higher authority than the people of Australia. And under my leadership Australia’s international engagement will be squarely driven by Australia’s national interests. To paraphrase former Prime Minister John Howard, as Australians, ‘we will decide our interests and the circumstances in which we seek to pursue them.’ www.lowyinstitute.org/publications/2019-lowy-lecture-prime-minister-scott-morrison

Writing in the Daily Telegraph, commentator Piers Akerman rightly said this about his speech:

Far from being an international villain as the Greens, Greenpeace, Amnesty, various refugee action groups and GetUp would have the deluded and mentally squishy believe, Morrison said that at every stage Australia has played its part as a force for good, in partnership with those who shared our outlook and our values.

He noted that the key to progress was individual, like-minded sovereign nations acting together with enlightened self-interest and highlighted the success of the Marshall Plan, the rebuilding of Japan and the Colombo Plan. In all cases, he said, it was the principled actions of nation states, most often led by the United States, binding together the liberal democracies of the western world underpinned by common values that anchor these societies.

Whether the moribund Canberra bureaucracy can shake off its internationalist mindset and adjust to the new Morrison doctrine is another thing. Given the voting patterns of the public service it is difficult to see any change coming soon. They like their taxpayer-funded gravy train and they would love to get their teeth into the bigger, richer international slush fund.

And US President Donald Trump gave a similar sort of speech at the UN – on September 24. He too blasted the attempts by the globalists and leftists to undermine national sovereignty. As he said:

Americans know that in a world where others seek conquest and domination, our nation must be strong in wealth, in might, and in spirit. That is why the United States vigorously defends the traditions and customs that have made us who we are. Like my beloved country, each nation represented in this hall has a cherished history, culture, and heritage that is worth defending and celebrating, and which gives us our singular potential and strength. The free world must embrace its national foundations. It must not attempt to erase them or replace them.

Looking around and all over this large, magnificent planet, the truth is plain to see: If you want freedom, take pride in your country. If you want democracy, hold on to your sovereignty. And if you want peace, love your nation. Wise leaders always put the good of their own people and their own country first. The future does not belong to globalists. The future belongs to patriots. The future belongs to sovereign and independent nations who protect their citizens, respect their neighbors, and honor the differences that make each country special and unique.

He also dealt with illegal immigration:

Here in the Western Hemisphere, we are joining with our partners to ensure stability and opportunity all across the region. In that mission, one of our most critical challenges is illegal immigration, which undermines prosperity, rips apart societies, and empowers ruthless criminal cartels. Mass illegal migration is unfair, unsafe, and unsustainable for everyone involved: the sending countries and the depleted countries. And they become depleted very fast, but their youth is not taken care of and human capital goes to waste.

The receiving countries are overburdened with more migrants than they can responsibly accept. And the migrants themselves are exploited, assaulted, and abused by vicious coyotes. Nearly one third of women who make the journey north to our border are sexually assaulted along the way. Yet, here in the United States and around the world, there is a growing cottage industry of radical activists and non-governmental organizations that promote human smuggling. These groups encourage illegal migration and demand erasure of national borders.

Today, I have a message for those open border activists who cloak themselves in the rhetoric of social justice: Your policies are not just. Your policies are cruel and evil. You are empowering criminal organizations that prey on innocent men, women, and children. You put your own false sense of virtue before the lives, wellbeing, and [of] countless innocent people. When you undermine border security, you are undermining human rights and human dignity.

But what was especially remarkable in his speech – praised by pro-lifers and condemned by pro-deathers – was his brief mention of abortion:

Americans will also never tire of defending innocent life. We are aware that many United Nations projects have attempted to assert a global right to taxpayer-funded abortion on demand, right up until the moment of delivery. Global bureaucrats have absolutely no business attacking the sovereignty of nations that wish to protect innocent life. Like many nations here today, we in America believe that every child — born and unborn — is a sacred gift from God. www.whitehouse.gov/briefings-statements/remarks-president-trump-74th-session-united-nations-general-assembly/

How many major world leaders stand up in international forums like this and unequivocally stand for life? Well done Mr President. We need many more leaders like you. Hopefully Morrison will gather some courage and decisively put his Christian faith out there on this vitally important issue.

To highlight these two leaders and their recent speeches is not to imply that I think they can do no wrong. Both have failed conservatives and Christians at times. But I sure am glad it is not Bill Shorten and Hillary Clinton calling the shots right now!