Yet another woke performance at the Oscars:

Oh dear. Another Hollywood super-event, and another case of nauseating political correctness and wokedom. When I penned my article earlier today about leftist moralisers and double standards, the 92nd annual Academy Awards was being broadcast live on television. I could not bear to turn it on.

But now that it is finished, we of course have millions of media reports about it all. And it seems that it was just as bad as I expected. There were plenty of leftist speeches offered by plenty of leftist movie stars who have nothing in common with ordinary Americans. 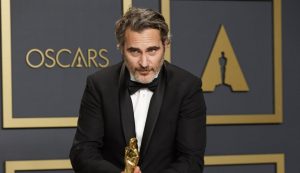 There were plenty of sanctimonious sermons delivered by these arrogant elites, and some were real doozies. And sometimes all you can do is let them speak – and say nothing in reply. Consider one of the memorable speeches by a mighty intellect that was heard at the Awards:

I think the greatest gift that [acting] has given me and many of us in this room is the opportunity to use our voice for the voiceless. I’ve been thinking a lot about some of these distressing issues that we are facing collectively, and I think sometimes we feel or are made to feel that we champion different causes. But for me I see commonality.

We go into the natural world and plunder it of its resources. We feel entitled to artificially inseminate a cow and then steal her baby, even though her cries of anguish are unmistakable. And then we take her milk that’s intended for her calf and we put it in our coffee and our cereal.

So who said that? In a sense, it doesn’t really matter – any one of dozens of lefty celebs could have uttered such deep and meaningful words of wisdom. But for those really keen to know, it was Joaquin Phoenix, who happens to be one of hundreds of woke Hollywoodians.

The lesson should be clear: we have all sorts of sanctimonious, hypocritical and duplicitous leftists who just love to preach to us, to moralise, and to let us know that they are superior beings who we all must bow down to. Their vaunted wisdom is so far above that of ours – we impoverished ignoramuses.

This was certainly on display big time at the Oscars. We had one big cheese celeb after another pushing their political nonsense on the rest of us mere mortals. They are absolutely full of themselves, and they just have to use a show like this as a platform to preach their PC foolishness.

Let me offer a few more examples. Brad Pitt had to make yet another attack on Trump and the recent impeachment process: “They told me I only have 45 seconds up here, which is 45 seconds more than the senate gave John Bolton this week. I’m thinking maybe Quentin does a movie about it. In the end the adults do the right thing.”

And they have even pulled a leaf out of the pages of Australian wokeness, running with something that is done here ad infinitum, ad nauseam. We had a Kiwi New Zealand film director Taika David Waititi say this: “The Academy of Motion Picture Arts and Sciences would like to acknowledge that tonight we have gathered on the ancestral lands of the Tongva, Tataviam and the Chumash. We acknowledge them as the first peoples of this land on which our motion picture community lives and works.”

We also had Josh Gad introducing a performance from the movie Frozen 2 with these PC remarks:

As Mindy [Kaling] noted, animated movies are loved everywhere. In fact, “Frozen 2,” or as climate change deniers call it, “Not Frozen 2,” has been dubbed in 45 different languages, which means I now have 44 blood rivals around the world. These dubbed versions provide kids and adults everywhere their own special connection to the story and its characters. Which means there are so many great versions of Elsa. For instance, Canadian Elsa is basically the same, but with health care.

But not to be outdone, documentary filmmaker Julia Reichert actually used a line from The Communist Manifesto during her acceptance speech: “Our film is from Ohio and China, but it really could be from anywhere that people put on a uniform, punch a clock, trying to make a better life. We believe things will get better when workers of the world unite.”

And while Steve Martin did engage in some more PC remarks, he did manage to make one joke that a conservative could readily say amen to: “A couple of years ago there was a big disaster here at the Oscars where they accidentally read out the wrong name. It’s nobody’s fault, but they’ve guaranteed that this will not happen this year because the Academy has switched to the new Iowa caucus app.”

But what are we to expect from the Hollyweird crowd? As I mentioned in my piece from earlier today, Mark Latham rightly nailed what this award ceremony is really all about: “Great, it’s Oscars day, when the people who protected Harvey Weinstein for 20 years and sucked up to Jeffrey Epstein get to tell the rest of us how to run our lives. Puke.”

And I also mentioned the satire site Babylon Bee headline from last year’s Academy Awards: “Nation’s Wealthy, Privileged Gather To Lecture Nation On Evils Of Wealth, Privilege.” Yep, that is about as succinct and accurate as you are going to get. And this year the BB offered us another winner: “Academy Unveils First Transgender Oscar Trophy: Introducing the Oscarita!”

9 Replies to “Ignore the Hollywoke Crowd”