We are now beginning to experience what people in socialist countries always experience:

Massive shortages of basic food items and everyday necessities like toilet paper. Lengthy lines of irritable shoppers outside of shops – at least the ones that are still open. Heavy rationing and constant government meddling with how we live. I can be talking about one of two things here: life under the corona crisis, or business as usual in socialist countries.

We are now all coming to terms with government lockdowns, rationing, shortages, and panic buying. That is pretty much a new experience for most of us in the West. But for those doomed to live in socialist paradises, this is just what life is like on a daily basis – and it has been for decades now. 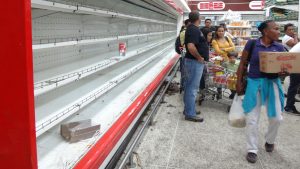 The horrors of living under these leftist dictatorships such as Venezuela are now becoming our lot as well. Certainly most younger people in the West have never known anything like this before. But many of our parents have known all about it.

Our parents or grandparents who grew up during the Great Depression knew what such life was like – and thankfully most of them learned from it. Most learned to value life and what we have, and most learned about the need to not waste. After the harrowing 1930s they knew that everything could be of value, so they tended to hang onto things.

My parents were a case in point. From my earliest years I recall them trying to instil in us kids the need to be frugal and never to waste. I even remember my dad telling me not to use so much toilet paper when going to the bathroom. And when my parents did eventually pass away, it was interesting to go through the family home.

There we found so many cardboard boxes in the basement, in closets, and elsewhere, many of them with the words “Waste not” written on them. I found boxes full of other boxes, or boxes full of paper bags. They really did not throw away anything.

And for good reason. They did not go through a week or two of lockdowns and shortages like we are now going through (and I do not know how much longer we will be). They went through years of deprivation, hardship, shortages and difficulties. So most of them learned their lessons, and never sought to waste anything again.

Many of us are now for the very first time going through for a period what our parents went through, and what folks living in communist and socialist countries go through for most of their lives. Whether in the Soviet Union or former communist Eastern Europe or Cuba or Venezuela, this sort of life was/is the norm.

So if that is what you are keen on, then keep foolishly championing politicians in the West like Bernie Sanders, Alexandria Ocasio-Cortez, or Jeremy Corbyn. Keep denouncing capitalism while you enjoy all of its many benefits. Keep railing against the free market as you use its products to do so: smart phones, laptops, the internet, etc.

Keep shouting vague and meaningless slogans about “equality” and the like. Of course if all these Western lefties were at all for real, they would have long ago moved to these workers’ paradises like Venezuela or Cuba. But for some reason they never do.

Let me turn to a brand-new piece on all this which is well-worth quoting from. Daniel Greenfield has just written an article with the title, “Coronavirus Communism Comes to California.” He notes how Californians had recently run with socialist Bernie Sanders in the Democrat primary.

And he reminds us of how Sanders not all that long ago was shouting his praise for Venezuela. The rest of his piece goes as follows:

The socialist dream in Venezuela began with toilet paper shortages, then dairy shortages, and eventually no food, medicine, or drinking water, while the Marxist regime paid its military thugs in food supplies. A few supermarket lines are only a small taste of “democratic socialism” in action.

The coronavirus isn’t Communism, but it has created social, political, and economic conditions similar to that of Communism, with an authoritarian state, a frightened populace, and resource shortages. There’s no better laboratory for seeing how the real thing would play out than in California.

California’s Sandernistas are invariably on the wealthy and comfortable side. Bernie bumper stickers rarely show up on beat-up Chevys, but on a Tesla, on a Mercedes, or on a Beemer. You can spot Bernie lawn signs outside lavish mansions whose owners imagine that socialism is for someone else.

Someone else’s cars and mansions will be confiscated. Not theirs. Someone else won’t be able to buy basic staples. Not the Silicon Valley tech bros pouring a fortune into the Sanders campaign and its PACs.

Bernie’s wealthy donors in the Inner Mission and Haight-Ashbury in San Francisco, and Echo Park in Los Angeles, are now discovering the lifestyle that they’ve only romanticized from a distance before as they wait in line in empty supermarkets and stare baffled at ‘Out of Stock’ messages on Amazon listings.

To paraphrase Sinclair Lewis, the poet laureate of California socialists, “When Communism comes to California, it will be wrapped in a repurposed paint fume respirator mask, wearing medical gloves, and driving a BMW with a Bernie 2020 bumper sticker while frantically grabbing rolls of toilet paper.”

There are two kinds of socialism: the ideal and the real. Ideal socialism is an entertaining set of intellectual games, castles in the sand, ivory towers in the air, where the right words and attitudes can enable the enlightened to implement heaven on earth. Real socialism is standing in line for toilet paper.

Capitalism is the best argument for socialism. When the supermarkets are full and there are lots of good jobs, then it’s easy to imagine that the system can be improved with a lot of authoritarian planning. Why not take all those goodies and distribute them more efficiently? There’s so much of the stuff that it seems easy to redistribute it, to add a few zeroes to budgets already filled with imaginary numbers.

And socialism is the best argument against itself. Socialists always think that they will lose their freedom to a wise ideal, only to discover that they will lose it to a grubby reality of incompetent bureaucrats, frightened mobs, and armed men in the streets.

Bernie’s vague rambling plans to nationalize everything from electricity to the internet, to bring into being a nation where the government decides how much deodorant and shoes you get to have, sound great until it stops being a hip ideal and becomes the tawdry reality of waiting in line for toilet paper. You don’t need a literacy program to realize socialism is a bad idea when you’re living through it.

California politicians have taken a break from a torrent of insane bills that proposed to ban receipts (they’re bad for the environment), ban fur, legalize eating roadkill, (if you run over a rabbit, you can eat it, but don’t you dare wear its fur), and banning separate clothes sections for little girls and boys, to ineptly tumble the state and its major cities headlong into a mismanaged response to the coronavirus.

The incompetence of California Democrats was all fun and games when it led to blowing up the homeless population while wasting billions of dollars, banning police from turning over illegal alien pedophiles to ICE, or accidentally outlawing freelance work across the entire state for the unions.

But now there are real consequences. It’s not just another bunch of zeroes or a handful of victims whose stories will never appear on any cable network except the one no respectable socialist would watch. Millions of lives have been disrupted. And countless lives are potentially on the line.

Socialism sounds like a great idea if you imagine that the people running things are smart, moral, and competent, as socialists imagine that they are. It falls apart in the real world where people aren’t. After voting for Bernie Sanders, Californians are discovering what it’s actually like to live in Venezuela, Cuba, or the Soviet Union, where they have no rights, there’s nothing in the stores, and nothing works. sultanknish.blogspot.com/2020/03/coronavirus-communism-comes-to.html

Of course to say all this is not to argue against some temporary and stringent government intervention in times of a major national crisis. But what it is to argue is this: all of those who hate the free market while singing the praises of socialism are now experiencing first-hand just what socialist life is like. I for one think it stinks.

13 Replies to “If You Like the Corona Crisis, You’ll Love Communism”