The mass protests make a mockery of the entire corona narrative:

This is my 60th piece on the coronavirus, and perhaps my last. Why? Because it seems our enlightened and fearless leaders think it is over. Have they said that? No, not quite, but actions speak far louder than words. With one leader after another allowing mass protests over the weekend, they made it clear by their actions that they believe corona is a sham.

Hmm, some of us have more or less been suggesting this all along. We have been asking hard questions for many months now, questioning the dodgy numbers, the rubbery figures, the baseless projections, the reckless modelling, the hyper-draconian lockdown measures, and the overreliance on iffy experts. 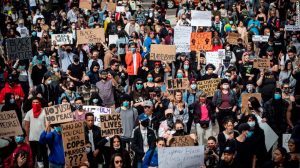 It seems that all of our doubts, concerns and questions may have been justified. And the disgusting double standards of our leaders has been just appalling, especially over the past week. For months they have told us that we are all going to die if we do not fully do everything we are told.

They claimed millions would die and it would be the end of the world as we know it if we all did not completely and fully obey everything they said. They demanded of us that we be servile sheeple, asking no questions and offering no resistance.

So they imposed upon us masses the most austere and draconian of restrictions and lockdown measures, resulting in destroyed economies around the world, and probably far more deaths from mental health problems, depression and suicide in the long run than from the virus itself.

And they insisted that all this was for our own good. To enforce their coercive utopianism on the rest of us, they turned free nations into police states. They arrested countless people and raised many millions of dollars in fines because of these sorts of horrendous evils of their recalcitrant citizens:

The list is endless, and I documented so many of these cases over the past few months. This was a hysterical and mad overreaction by governments, by leaders, by the authorities, by the police and by anyone who got a little whiff of their newfound powers. These folks became quite drunk on power and control.

They loved it. All these tinpot dictators sprang to life overnight. We all had to put up with these petty tyrants. I even had firsthand encounters with these mini-Hitlers who so relished their newly discovered powers that they were treating people like dirt as they dared to get a few staples at grocery stores.

But then came along a new cause for the media to divert our attention with. All of a sudden it is as if Covid disappeared because now the media wanted us to find a new cause to panic over and emote about. The new narrative – really an old one resurrected – is that all whites are evil, all cops are bad, and all blacks are fully innocent.

And of course the media and many of our politicians and leaders fully jumped on board this cause as well. So we had all the protests, which for so many was just another excuse to riot, to loot, and to burn down cities. And as I mentioned before, how convenient that these twin crises have emerged in an American election year.

Hmm, what better way to seek to bring down a sitting President that the left, the media, and our elites utterly hate, than to destroy the economy and destroy our cities. How convenient indeed. Any crisis will do. Any excuse will do to further wallow in Trump Derangement Syndrome.

So Covid was quickly and easily forgotten about as mass protests were not only allowed but often encouraged by leftist leaders around the globe. Be they Labor Premiers in Australia or Democrat governors and mayors in America, almost all of them did absolutely nothing to stop these mobs protesting. They could have done something, but most refused to do anything.

So now we are left with two main possible outcomes. And either one tells us what a bunch of hacks and crooks we have for leaders. Either outcome should enrage the real citizens of the world to consider getting rid of these leaders pronto.

One, we will see a massive spike in new corona cases because of all these mass protests, with countless selfish folks totally ignoring any social distancing and stay at home advice. If this happens, all the power-hungry politicians who allowed these marches should be sacked immediately.

Two, we will see no massive spike in new corona cases. In which case, we can question all the gloom and doom alarmism and baloney our leaders have been force-feeding us all these months. If this happens, all the power-hungry politicians who destroyed our economies and our nations should be sacked immediately.

Either way, they will have been found out to be the frauds they are. They are either the greatest hypocrites we have seen in a long time, and deserve to be treated like the useless wonders that they are, or they will have been shown to be tyrants who love power and will find any cheap excuse to lord it over the masses. Both scenarios tell us just how bad so many of them are.

I of course am not alone in all these concerns. I am not the only one utterly outraged and incensed at all the double standards we keep seeing here. Plenty of others have been saying exactly the same thing. Let me finish with comments by four others – two from the US and two from Australia. Dinesh D’souza just said this online:

What suckers we turned out to be!
No weddings!
No funerals!
No graduation!
Let’s remember all this the next time they try to play on our fears to promote a transparently political agenda.

He was referring to this new article:

For months, public health experts have urged Americans to take every precaution to stop the spread of Covid-19—stay at home, steer clear of friends and extended family, and absolutely avoid large gatherings. Now some of those experts are broadcasting a new message: It’s time to get out of the house and join the mass protests against racism.

“We should always evaluate the risks and benefits of efforts to control the virus,” Jennifer Nuzzo, a Johns Hopkins epidemiologist, tweeted on Tuesday. “In this moment the public health risks of not protesting to demand an end to systemic racism greatly exceed the harms of the virus.”

But their messages are also confounding to many who spent the spring strictly isolated on the advice of health officials, only to hear that the need might not be so absolute after all. It’s particularly nettlesome to conservative skeptics of the all-or-nothing approach to lockdown, who point out that many of those same public health experts—a group that tends to skew liberal—widely criticized activists who held largely outdoor protests against lockdowns in April and May, accusing demonstrators of posing a public health danger. Conservatives, who felt their own concerns about long-term economic damage or even mental health costs of lockdown were brushed aside just days or weeks ago, are increasingly asking whether these public health experts are letting their politics sway their health care recommendations.

Down under, Australian Spectator editor Rowan Dean let rip on the absurdity of all this. He said:

We have been thoroughly, comprehensively and disgustingly betrayed – all of us…

Either there is a pandemic or there isn’t. Either our governments had the right to lock us down or they didn’t. Yesterday the premiers made a mockery of this nation and the loyalty of its people. Of you and of me… If the pandemic is real then our most vulnerable Indigenous Australians now have a potential death sentence hanging over them. So much for ‘Black Lives Matter.’ Clearly not to the people who marched in our cities yesterday, endangering Indigenous and non-Indigenous Australians alike at the very moment restrictions were being lifted, shame on you!

Or was it all just a con? Were the states denying us our constitutional rights and had no authority to shut down our businesses and shut down our lives? If so, premiers, and police chiefs, and those chief medical officers lied and they must go!

You can see his impassioned 3-minute video here – please watch and share: caldronpool.com/rowan-dean-slams-authorities-following-huge-blm-protests-either-there-is-a-pandemic-or-there-isnt-was-it-all-just-a-con/amp/

My last witness is a good friend from NSW who gives a very personal – and very sad – look at all this diabolical duplicity:

One person was sent home from my mother in law’s funeral at the door because they forgot to count the cameraman in the room out the back who never put his head out the door – so only 8 people allowed or we would have been fined. Carl – her only grandchild and me her only daughter-in-law couldn’t go because Carl who lives in the same house as me and has Autism couldn’t sit next to me. My husband couldn’t have the support of his wife and child at his own Mum’s funeral. He said the funeral was pretty bad – a travesty of a send-off for a life loved and a life well lived. It still feels surreal. And then of course we haven’t been able to see my father or anyone for support in grieving afterwards over the last few weeks. This is like rubbing excrement in our faces for good measure after what we have had to give up, after the great sacrifice we made.

Yes sister, we feel for you. Our politicians really do have a lot to answer for. In so many ways, they have blood on their hands.