Beware the ideological – even religious – attacks on Amy Coney Barrett:

It goes without saying that the secular left really does not like religious conservatives. This is one of the defining divisions in the modern West – certainly in America. Indeed, the US Democrats are now unapologetically the party of the radical secular left – they have fully mainstreamed this agenda. 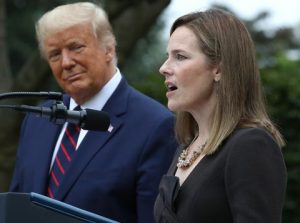 This all-out war declared on conservatives and Christians by the woke progressives is everywhere apparent. Simply consider all the vile hatred being poured out on Trump by those who keep accusing him of hate: they are gleeful that Trump has Covid and many are saying they hope he dies.

Others have already documented this appalling leftist ugliness, including James Macpherson in a recent piece. He writes: “Donald Trump’s odds of recovering from COVID-19 are much better than the odds of Trump haters recovering from Trump Derangement Syndrome.” goodsauce.news/morally-superior-woketivists-jeer-wish-potus-death/

Recently the Democratic Senator Mazie Hirono from Hawaii provided yet another example of this prejudice against religious conservatives. On a leftist talk show she said she questioned whether Trump’s nominee for the Supreme Court, Amy Coney Barrett could be objective, since she is a prolife Catholic with a large family.

A number of points can be said in response. First, everyone has an overriding worldview that they adhere to which colours how they think about things. This is true even of atheists and secular humanists. No one on the planet is completely objective, and everyone has a prior commitment to certain basic beliefs that influence how they approach life.

Secular humanism is the dominant worldview of the radical left – including Hirono. And it is every bit as religious. As Benjamin Wiker observed in his important 2013 book, Worshipping the State: How Liberalism Became Our State Religion:

In defining itself from top to bottom directly against Christianity, secular liberalism is a kind of inverse image, like a photo negative, of the religion it has so energetically worked to displace for the past several centuries. It is a kind of anti-Christian religion as extensive in its claims as the Christianity it denies, with its own set of passionately held beliefs and dogmas. It doesn’t just look like a religion. It doesn’t just function like a religion. It is a religion.

Or as Brendan Sweetman put it in Why Politics Needs Religion: “Let us not forget that the word religion is often interpreted to mean ‘a way of life.’ And secularism is a way of life just as much as traditional religion is, although it is not as widespread or well established.”

Since we are talking about SCOTUS here, recall that this august body itself ruled a half century ago that secular humanism is a religion. See the 1961 Torcaso v. Watkins case. As David Noebel put it in his carefully documented volume, Clergy in the Classroom: “Secular Humanism is a non-neutral perspective, complete with a philosophical view of ultimate reality (metaphysical naturalism) and a set of normative, ethical ideals. In short, it is a distinct and particular worldview.”

Yes we all have worldviews and we are all influenced by those worldviews. So this idea that a Catholic jurist is somehow incapable of thinking and ruling objectively is just ludicrous. She will be no more subjective and partial than any atheist jurist will be.

And one certainly has to ask if these same leftist Democrats who so despise ACB would make a similar sort of stink if a Muslim was nominated for the Supreme Court. Do we really believe they would carry on about how harmful religion is, and how impossible it is for such nominees to be objective? I don’t think so.

Really?! Does the Senator not know that there have been over 300 SCOTUS decisions that have later been overturned? As one write-up on this begins:

This is a list of decisions of the Supreme Court of the United States that have been explicitly overruled, in part or in whole, by a subsequent decision of the Court. It does not include decisions that have been abrogated by subsequent constitutional amendment or by subsequent amending statutes. As of 2018, the Supreme Court had overruled more than 300 of its own cases. The longest period between the original decision and the overruling decision is 136 years…. The shortest period is 11 months…. There have been 16 decisions which have simultaneously overruled more than one earlier decision; of these, three have simultaneously overruled four decisions each. en.wikipedia.org/wiki/List_of_overruled_United_States_Supreme_Court_decisions

So there is no reason at all to believe that Roe v. Wade or any other past SCOTUS decision is inviolate and incapable of being further examined at some point. That is simply how the Court works. As an article on Hirono correctly notes:

Her concern is that Barrett will not follow Democrats’ modern interpretation of the Constitution, which, they believe, supports the killing of unborn babies in abortions for any reason through all nine months of pregnancy. Hirono has been criticized for anti-Catholic bias in the past as well. In 2019, U.S. Senate leaders introduced a resolution to rebuke her and Sen. Kamala Harris after they criticized a federal judicial nominee because of his affiliation with the Knights of Columbus, a Catholic society that does a lot of charity work for pro-life pregnancy centers. www.lifenews.com/2020/10/02/mazie-hirono-amy-coney-barrett-cant-be-objective-because-shes-a-christian/

In sum, this is NOT about some religious conservative “taking over” SCOTUS and turning America into a theocracy. This is about radical leftists who despise conservatives – especially prolife ones – and do not want them to have any further influence in America’s top court.

11 Replies to “SCOTUS, Christians, and Objectivity”