Romans 1 fully explains where we are at today:

How do we understand what is happening in the world – especially the political, cultural, moral and spiritual decline we see taking place all over the West? Plenty of explanations could be offered here, and most would likely have some elements of truth. Here I will focus on a biblical and spiritual assessment. 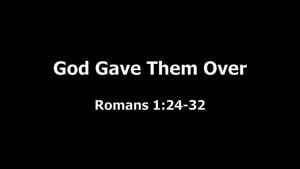 The occasion of this piece is the various outcomes we have seen recently on the political landscape and elsewhere. As I just posted on the social media: “Hmm, 4 losses in a row: NZ, ACT, AFL, Qld. Better have a win on Tuesday – the most important contest of all.”

Of course the AFL bit was a little humour in an otherwise sad line-up. And one diehard Richmond supporter let me know it was no loss at all! Just yesterday I wrote about the various electoral defeats, and how the Christian should think about them: billmuehlenberg.com/2020/11/01/politics-elections-and-perspective/

And with the Tuesday American elections being such a hugely important make or break reality, those spiritual perspectives need to be kept in mind. Christians will need to be praying plenty over the next 40 or so hours. Much of the work has already been done: the politicking, the campaigning, the rallies, the voting, etc.

Trump is holding 14 rallies in the final three days – five of them today – and they are drawing enormous crowds in the tens of thousands! Not bad for an old guy who just went through a bout of the Rona. So while the time is almost out for more work, there is never a time to stop praying – so please do.

But I want to look further at a main explanation for all the frightful things we find happening all around us. Not just the electoral defeats that should bother all concerned conservatives and Christians but the general trend of unrestrained evil seemingly taking over everywhere.

As but one example, the evil of the culture of death just seems to be getting worse and worse. As soon as Palaszczuk won the Queensland election, she said her first priority would be to see euthanasia fully legalised. As I also just said on the social media:

There are various reasons for the Queensland result. One was many older folks left Pauline and went with Labor. Fear of the Rona seems to have been a major factor. They actually believed the alarmism of Palaszczuk and that she would keep them safe. Yet now she is pushing euthanasia big time. These folks will NOT be kept safe if that goes ahead. IDJUTS!!

Evil seems to be abounding, and righteousness seems to be on the retreat. Again, how do we explain all this? What I just read in my morning Scripture reading pretty well tells us exactly what is happening and why. And so important is this passage that it is worth presenting it in full here. I refer to that incredible text, Romans 1:18-32:

For the wrath of God is revealed from heaven against all ungodliness and unrighteousness of men, who by their unrighteousness suppress the truth. For what can be known about God is plain to them, because God has shown it to them. For his invisible attributes, namely, his eternal power and divine nature, have been clearly perceived, ever since the creation of the world, in the things that have been made. So they are without excuse. For although they knew God, they did not honor him as God or give thanks to him, but they became futile in their thinking, and their foolish hearts were darkened. Claiming to be wise, they became fools, and exchanged the glory of the immortal God for images resembling mortal man and birds and animals and creeping things.

Therefore God gave them up in the lusts of their hearts to impurity, to the dishonoring of their bodies among themselves, because they exchanged the truth about God for a lie and worshiped and served the creature rather than the Creator, who is blessed forever! Amen.

For this reason God gave them up to dishonorable passions. For their women exchanged natural relations for those that are contrary to nature; and the men likewise gave up natural relations with women and were consumed with passion for one another, men committing shameless acts with men and receiving in themselves the due penalty for their error.

And since they did not see fit to acknowledge God, God gave them up to a debased mind to do what ought not to be done. They were filled with all manner of unrighteousness, evil, covetousness, malice. They are full of envy, murder, strife, deceit, maliciousness. They are gossips, slanderers, haters of God, insolent, haughty, boastful, inventors of evil, disobedient to parents, foolish, faithless, heartless, ruthless. Though they know God’s righteous decree that those who practice such things deserve to die, they not only do them but give approval to those who practice them.

There you have it. When evil goes on and on, and folks keep shaking their fists at the living God, he has no other choice but to give them up, and to give them fully over to their sin. Three times it says that God gave them up. There is no scarier place to be in than that.

And the outcome is as predictable as it is awful. Notice that the number one sin Paul lists here as a consequence of all this is homosexuality. And then he goes on to list plenty more, including unrighteousness, hatred of God, and the invention of evil.

Yep, sounds like Melbourne in November 2020, or Brisbane, or Auckland, or London, or Paris, or New York, or Chicago, or Toronto, etc. This is pretty much exactly where the West is at today. We may well be at the end of the line, and our chances may well be just about over.

There would be plenty of commentary I could appeal to here, but let me draw upon just one bit which I have often run with. I refer to the terrific 2009 expository commentary on Romans by the late R. C. Sproul (1939-2017). His remarks are also worth running with in full. He calls his chapter on Ro. 1:22-32 “Judicial Abandonment.” He writes:

Sproul says similar things in his classic book The Holiness of God (Tyndale, 1985, 1998), but applying it to nations as well:

Since it is our tendency to take grace for granted, my guess is that God found it necessary from time to time to remind Israel that grace must never be assumed. On rare but dramatic occasions He showed the dreadful power of His justice. He killed Nadab and Abihu. He killed Uzzah. He commanded the slaughter of the Canaanites. It is as if He were saying, “Be careful. While you enjoy the benefits of my grace, don’t forget my justice. Don’t forget the gravity of sin. Remember that I am holy.”

In 48 hours we may well know the result of the American elections. I have to say that if the Democrats win the White House, and especially if they also win the Senate and the House, then judicial abandonment would seem to be exactly what has befallen the US.

If not, then we have some divine mercy and grace – at least for a while. Keep praying my friends. Keep praying.

20 Replies to “This Explains What Is Happening”