We still see politicians exploiting corona to serve their grab for more power: 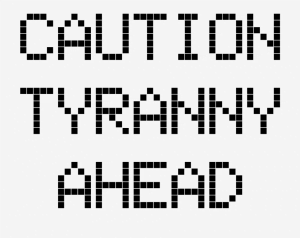 We know full well how it works. We have lived through it. We have seen it happening with our own eyes. It is upon us as we speak. The corona crisis has provided the perfect excuse for all this to happen – and it has happened with incredible ease. Here is the quick and easy three-step process that we have been witnessing:

One. The state manufactures or exploits a crisis or emergency.
Two. The state and the media hyper-inflate the fear, magnify the alarmism, and peddle the panic-porn.
Three. The masses fully buy the panic and succumb to the fear, and readily – even happily – do whatever they are told with no questions asked.

And there you go. This is your perfect storm for instant tyranny. This is how you willingly and gladly give away all your freedoms and basic human rights. This is indeed how it ends. Instead of learning to live with a virus which may have at worst a one per cent fatality rate, we have become a nation of sheeple in full-blown panic and terror.

We see this happening week after week in Australia. Indeed, almost every day we encounter a new indication of this madness from our power-drunk leaders – and a willingness to go along with it by the masses. Here are just a few recent examples of this:

-One case – just one case – of corona is found in Perth, and the entire state is sent into lockdown with the compulsory mask-wearing and so on, and other states such as Victoria yet again restrict travel to WA.

-Victoria has not had any cases for a month, yet the dictator running things there, Dan Andrews, tells us that we must live in the state of emergency for at least another four weeks.

-The panic-pushing Premier of Queensland absolutely wrecked her state economically – and in other ways – with her idiotic and senseless border closures, and now she is begging taxpayers and the federal government to bail her out.

-We have just learned that the hotel quarantine staff in Melbourne were paid nearly $80 million of our tax dollars to do absolutely nothing over a 5-month period last year!

-The Andrews government spent $8 million of our tax dollars on legal fees at the hotel quarantine inquiry, $2 million more than the inquiry itself!

-Instead of being one nation, Australia has become a bunch of competing nations, a bunch of petty fiefdoms, with each premier trying to outdo the other in acting like a mini-Hitler.

The list goes on and on. We have clearly seen how most Australian political leaders – as in much of the rest of the West – are nothing more than wannabe tyrants and dictators who are absolutely drunk on power and control. They utterly love being able to lord it over everyone else.

And of course the lessons of history are perfectly clear on all this. When control-freak rulers take away our liberties and infringe upon our basic rights, they are loath to undo what they have done. The more power they have, and the more freedoms they strip away from the citizenry, the more they want.

The lust for power is a drug, and it is never satisfied. The more control these would-be dictators have, the more they crave. But just as bad is the brainless panic and fear of the masses. I have never seen so much madness in my life. I have heard so many sheeple fully defending this crackdown of freedom and this attack on human rights.

With all this going on, I for one despair greatly for where we are headed. But some others care as well – not many, sadly, but they do exist. Various voices have been speaking out strongly here and overseas about the way governments have been overreacting to things, throwing us all into draconian lockdowns, and not even caring that our freedoms are being taken away from us.

In the UK for example one thinks of people like Brendan O’Neill and Peter Hitchens who have been speaking out on this madness all along. I have quoted both of them often over the past year. And thankfully here in Australia a number of voices have been heard, warning where all this is headed.

And we now have a number of these voices brought together in one volume. Perth law professor Augusto Zimmermann has edited a collection of extremely important articles entitled Fundamental Rights in the Age of COVID-19 (Connor Court, 2020).

Let me offer the contents to this very important volume:

Each of the authors could be discussed and cited here, but let me concentrate on Dr Zimmermann’s chapter, and offer three quotes from it:

Since March 2020 Australia’s governments, both federal and state, are using their powers to excessively coerce, obstruct or otherwise unreasonably interfere with the life, liberty and property of the citizen. What these governments are doing is nothing but profoundly arbitrary and unconstitutional. They are using their newly acquired emergency powers to oppress the people and undermine basic principles of democratic government – including equality before the law and the right of citizens to be protected from unpredictable and arbitrary interference with their vital interests….

There was never an emergency that could justify the imposition of these emergency measures. Politicians have justified the incredible harm they are causing to the Australian people by getting completely drunk on their own sense of self-righteousness. Full of themselves, they proudly warned that we face a great threat but their policies have saved us from the spread of a deadly virus. The privileged members of our political class are therefore able to block our peaceful protests because they think they know better what needs to be done, and even if we are eventually oppressed, silenced and destitute as a result.

A reasonable concern for our well-being is one thing, but the actions taken by politicians during this pandemic have gone well beyond the extreme. What is happening is simply disgraceful and it gives new meaning to the phrase, ‘The cure is worse than the disease’. Of course, some of the worst crimes against humanity have been committed by individuals who believed they were simply doing a ‘great good’….

So many people have developed an utterly distorted view of government, or what a government can do for them. Such individuals now expect almost everything to come from government. They blindly worship at the altar of their all-mighty government, expecting their “benevolent” rulers to act as their almighty saviours, believing in government basically as the ultimate provider for all good things. Perhaps this is the result of society’s lost faith in the God of Christianity. Be as it may, the undeniable truth is that far too many Australians have acquired a disturbingly unshakeable faith in their ruling political masters. Call it a form of idolatry if you will.

Fortunately, the only discernible benefit of this ongoing pandemic has been to expose the authoritarian behaviour of the ruling elites led by the Australian Prime Minister and State Premiers. It has now become clear that such privileged individuals are developing a real taste for power and unlawful control over the population. The Prime Minister, Premiers, senior advisors and politicians have never had such an energising time as this. They are so full of importance and power that one can only expect them to continue running the country in such a heavy handed manner.

As should be clear from those words, Professor Zimmermann and I are on the same page here. As would be the other authors found in the book. I urge you all to get a copy or two. The volume is really that important, and we must pay careful heed to what is found therein.

To conclude, if you think my three-point recipe for tyranny offered above is still too long, a meme making the rounds on the social media has shortened things up a bit, but is just as true: “If you allow the government to break the law because of an emergency, they will always create an emergency to break the law.”

(The book is found here: www.connorcourtpublishing.com.au/Fundamental-Rights-in-the-Age-of-COVID-19–Edited-by-Augusto-Zimmermann-Joshua-Forrester-_p_414.html )

13 Replies to “The Three Easy Steps to Dictatorship”