This is one of the most shocking pieces of legislation being pushed in the US:

There are countless reasons why so many of us warned about the mega-dangers of a Biden presidency, and why the NeverTrumpers, especially the “Christian” ones have blood on their hands. I could offer a lengthy list here of all these incalculable damages that are and will be inflicted on America with Sleepy Joe in the White House. 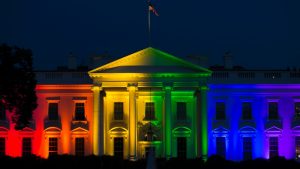 But one of the worst is the so-called “Equality Act”. I and others have long been warning about this dreadful bill, and we have often mentioned how this one item alone would be enough to persuade all those concerned about liberty and human rights to NOT vote for the Democrats.

Sadly however too many clueless wonders – including too many biblically-illiterate Christians – decided the radical, hyper-left Dems were somehow preferable to Trump and his ‘mean tweets’. Now we are all suffering greatly. And if this bill goes through, we are all toast.

A number of recent pieces on this are worth drawing your attention to. Here are four of them. Ryan Anderson knows all about how horrifically bad this bill is, having just had his 2018 book on transgenderism banned by Amazon. See my review of this first-class volume here: billmuehlenberg.com/2018/02/21/review-harry-became-sally-ryan-anderson/

Ryan points out how “Biden’s Equality Act is a danger to women’s and conscience rights”. He writes:

The Equality Act would sacrifice the hard-won rights of women, while privileging men who identify as women. If it ­becomes law, such men would have a right to spend the night in battered-women’s shelters, disrobe in women’s locker rooms and compete on women’s sports teams — even at K-12 schools.

Don’t believe me? Here’s the text: “An individual shall not be denied access to a shared facility, including a restroom, a locker room and a dressing room, that is in accordance with the individual’s gender identity.” So you can keep separate facilities for men and women, but you have to redefine what men and women are. Likewise, you can ­reserve certain jobs only for men or women — think TSA agents doing pat-downs — but you have to let a man who identifies as a woman do strip searches on women.

The act would also massively expand the government’s regulatory reach. The Civil Rights Act, it seems, is too narrow for today’s Democrats. The Equality Act would coerce “any establishment that provides a good, service, or program, including a store, shopping center, online retailer or service provider, salon, bank, gas station, food bank, service or care center, shelter, travel agency or funeral parlor, or establishment that provides health care, accounting or legal services,” along with any organization that receives any federal funding.

That’s more or less everyone and everything. Religious institutions are very much included. Under the Equality Act, religious schools, adoption agencies and other charities would face federal sanction for upholding the teachings of mainstream biology and the Bible, modern ­genetics and Genesis, when it comes to sex and marriage. nypost.com/2021/02/21/bidens-equality-act-is-a-danger-to-womens-and-conscience-rights/

Michael Brown also has written on this. His piece, “Agnostics, Orthodox Jews, Catholics and Evangelicals Agree: ‘Equality Act’ is Dangerous to Human Rights,” is also well worth reading. He writes:

As summed up by evangelical leader Mat Staver, “HR 5 is a bill that pushes the LGBT agenda on all people and targets Christianity in every area of life — including the church. There will be an increase of instances where Christians and others are being punished unless they violate their beliefs in order to comply with such a law. And that is just the beginning of unconstitutional chaos in America.”

In short, not only would religious beliefs be trampled in the name of “equality,” but simple human rights — most specifically, women’s rights — would be trampled as well. (As Chart and Menken wrote, “Women, check your ‘privilege.’”) That’s why many people of faith and non-faith are uniting together against the so-called Equality Act.

It’s one thing to stand against the mistreatment of those who identify as LGBTQ (or anything else). It’s another thing to turn the world upside down, throw out common sense and logic, and trash the religious liberties of the majority of the nation in the name of equality.

As expressed by the Catholic bishops, “Human dignity is central to what Catholics believe because every person is made in the image of God and should be treated accordingly, with respect and compassion. This commitment is reflected in the church’s charitable service to all people, without regard to race, religion or any other characteristic.”

Consequently, “It means we need to honor every person’s right to gainful employment free of unjust discrimination or harassment, and to the basic goods that they need to live and thrive. It also means that people of differing beliefs should be respected. In this, we wholeheartedly support nondiscrimination principles to ensure that everyone’s rights are protected.”

And that is precisely why we need our elected officials to vote against the Equality Act as it is currently written. We can all stand together on this. stream.org/agnostics-orthodox-jews-catholics-and-evangelicals-agree-equality-act-is-dangerous-to-human-rights/

Mat Staver is worth quoting even further:

The expansive reach of LGBTQ norms will be imposed on everyone, putting men into women’s changing rooms, boys onto girls’ sports teams and pedophiles into daycare centers. I know this sounds like an exaggeration, but it’s not.

Noncompliant religious and nonprofit schools will lose tax exemption, and schools will lose accreditation, which means they could not accept student loans and students would not be accepted into most graduate schools. The coverage of the bill includes church and college overnight stays with youth and/or students, dorms, sports, restrooms, locker rooms and showers.

Churches, synagogues and mosques will be forced to violate their sincerely held religious beliefs with respect to LGBTQ behavior. The Senate version defines the “Q” in LGBTQ as “Queer,” and this is where the “Equality Act” goes from disturbing to reprehensible.

“Queer” includes not only lesbian, gay, bi, transsexual and transvestite behaviors, but also a host of “paraphilias,” which includes nearly 550 sexual perversions. “Paraphilias” include every perverted proclivity and behavior – and specifically includes “minor-attracted individuals,” aka pedophiles.

Rod Dreher is also greatly concerned about this bill. He quotes some of those I have quoted, and then finishes his piece with this strong warning:

If you expect orthodox Christianity — as distinct from the false church of Moralistic Therapeutic Deism — to survive all this, you had better be drawing in and digging down in a Benedict Option way of living. And you had better start preparing yourself, your family, and your community, Kolakovic-style, for the coming persecution, once we are declared “domestic terrorists” because we will not conform. If you think I’m being an alarmist here, then tell me, where is the line you would draw, beyond which you know that persecution is upon us? www.theamericanconservative.com/dreher/the-queering-of-young-america-benedict-option-live-not-by-lies/

Finally let me draw upon a recent piece by Andrew T. Walker of the Southern Baptist Theological Seminary. He says this:

The Equality Act contains a metaphysical revolution in its pages, and it seeks the evangelization of the West. The old order was one with an ethic of objectivity, reason, fixed nature, authority, and boundaries, where organic connections and family relations were seen as guiding, normative, and persuasive, with anything opposed to these as transgressive. The revolution well underway is to make all of these metaphysical fixities not only wrong, but harmful. Thus, in the Equality Act’s telling, anything that does not champion expressive individualism or limitlessness, or derive its existence by government fiat is, well, oppressive. We are witnessing, in real time, the final displacement of a Christian account of the universe by a wholly secularized one.

The Equality Act is an assault on the Christian imagination, and this is where its long-term consequences are most dire and calamitous. It aims to reconfigure not only the foundation of family life and biological connections to gender, but to catechize, inculcating a different way of conceiving one’s place and orientation to the world. Moral imaginations are guided by normative constraints, which give them definition and direction. Ideally, a human imagination ought to comport with what is good, true, and beautiful. To educate the moral imagination is to seek a shared imagination, rooted in a shared account of the world, and therefore binding and persuasive to all of the citizens beholden to it.

There cannot be order in society without the recognition of truths that make obtaining order possible, and there is no truth without which order flows. The Equality Act stands against these truths and promises the fulfillment of a progressive eschaton, relying on the urgency of the self for its scaffolding. My own ethical scaffolds are based on truths over thousands of years old. They have never had to cater to the spirit of the age, for they are grounded in the very strata of creation. They are oriented toward human flourishing, and I will cling to them at all costs so that the next generation might be preserved to see their communities endure in moral prosperity, as their Creator has always intended. www.theamericanconservative.com/articles/the-equality-act-is-farewell-to-a-christian-metaphysic/

This bill is a massive threat to all that we value and cherish. But the sad thing is, it need not have come to this. A Trump re-election would have put a major obstacle in the way of this and other nefarious bits of legislation. Now all true Christians will be even more at risk. And much of this is due to all those NeverTrump woke believers.

As I said, they really do have blood on their hands.

The House of Representatives has just passed the Equality Act, 224-206. It now heads to the US Senate. Please pray, and if you live in America, please contact your Senators ASAP.

14 Replies to “The US INequality Act”