The failings of modern education:

I have written often on the sad state of education in the West. It is now almost a truism that if you want your children to be properly educated, you may need to keep them away from most Western schools. Indeed, it seems to get worse each passing year: the more schooling we have, the less educated our children seem to be. 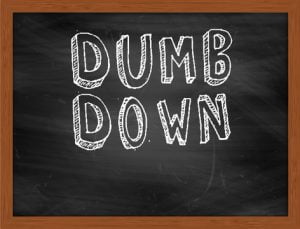 Plenty of folks have pointed out this reality. Studies have even been conducted to demonstrate just how much we have dumbed down people in recent decades. And plenty of anecdotal evidence is available on this as well. I too have certainly noticed a marked decline in basic educational outcomes.

Given that I have done a lot of teaching over many years now, it has been interesting – and disappointing – to see how things have slowly changed for the worse over the years. While I keep getting older every year, I keep getting a new batch of students who are always around the same age. So I may have a number of 20-year-olds or many in that age range.

What I have noticed – and many others would have noticed as well – is how the modern Western education system is failing us big time. Increasingly we find so many students who have been taught very little of worth with the result that it is now common for many kids to leave high school still basically illiterate, innumerate, etc.

Far too many are no longer being taught the basics. They seem to have much less basic knowledge, they have less knowledge of history, they have less ability to think critically and logically and to analyse arguments. Indeed, they are often not taught how to think – they are just taught what to think. They increasingly are not being educated – they are being indoctrinated and flooded with secular left propaganda.

They may know little about their own history, but they know everything about the radical homosexual and trans agendas, they know all about cancel culture and woke ideology, and they have been fully exposed to all the latest leftist causes.

And sadly this is often true of Christians as well. Just like their non-Christian counterparts, they are often the product of a dumbed-down education system. But they are also increasingly the product of a dumbed-down theological education. It seems that many of their churches have not taught them the basics of biblical truth and doctrine. They often have less and less understanding even of core Christian beliefs.

On top of all this decline in basic education and the ability to think and assess, kids today are more and more just being taught to emote. Feelings have trumped facts. And feeling offended at stuff seems to be one of the main outcomes of so much education today.

When you have an entire generation that cannot think straight and analyse things, but just run on emotions, then you know we are in big trouble. Sure, there are always wonderful exceptions: there are smart, thoughtful, rational and informed students – but they tend to be in the minority. For so many of them, you need to go over all the basics. You can no longer assume they have much general knowledge, or even much biblical knowledge.

Indeed, moral and spiritual knowledge are also taking a nosedive. Many others are equally quite concerned about all this and have spoken out about it. One such figure is Dennis Prager who has recently penned a piece on these issues. It is well worth quoting from. He begins:

I have been telling parents for decades that sending a child to almost any college is playing Russian roulette with his or her values.

But it is a different version of Russian roulette. In the traditional version, only one of the gun’s six chambers contains a bullet. In the college version of Russian roulette, 5 of the 6 chambers contain a bullet. If your child attends almost any university in America (or Canada or anywhere else in the English-speaking world), the odds are that your child’s decency, intellectual acuity, faculty of reason, character and moral compass will be damaged, perhaps permanently.

The worse news is that sending your child to almost any elementary school or high school — public or private — is fast becoming equally toxic. More and more schools are being taken over by left-wing ideologues and by nonideologues who lack the courage to confront the ideologues.

Once infected with leftism, these schools teach children to hate reason, tradition, America, Christianity, whites, excellence, freedom and masculinity. To cite one example, thanks to a million-dollar grant from Bill Gates through his Bill and Melinda Gates Foundation, the Oregon Education Department has announced that teaching there is “one right answer” in math — yes, in math — is an expression of white supremacy. Why, then, would an Oregon parent who cares about his or her child’s mind, send that child to an Oregon school?

Good question. And he has more such questions:

Why would you send your young child to a school that sponsors a “Drag Queen Story Hour” or that dwells on “nonbinary” gender identity? Do you think such things do not damage your child’s innocence? Do you want your child to be challenged about his or her sexual identity?

Why would you send your child to any school that teaches The New York Times’ “1619 Project”? This project holds that America was not founded in 1776 but in 1619, with the arrival of the first black slaves in North America, and that the Revolutionary War was fought not to gain independence from Britain but to preserve slavery. Virtually every leading historian specializing in American history — most of whom are liberals and Democrats, and some of whom were anti-Trump activists — have labeled “The 1619 Project” a lie.

Whenever I meet adults who hold traditional American values, I ask them three questions:

The first is, “Do you have children?”

If they do, my second question is, “How many of them share your values?” It is not common to meet people all of whose children share their parents’ traditional values.

If they respond that any of their children do not share their values, my third question is, “What happened?”

In every instance, these parents attribute the alienation of their child(ren) from their (the parents’) values to the college and, increasingly, the high school their child attended.

Moreover, not only are these children alienated from their parents’ values, but they are often also alienated from the parent(s). One thing you learn when you become left-wing is to have contempt for those who hold other beliefs.

I am well aware of the enormous obstacles. If your child wishes to study STEM (science, technology, engineering, math) or law, college remains a necessity. Otherwise, it isn’t.

As for elementary and high school, parents must either find a school that teaches reading, writing and arithmetic rather than America-hatred, or they should home-school their child. This, understandably, sounds terribly daunting. However, it is becoming considerably easier to do so as home-school groups and quality home-school curricula proliferate around the country.

Whatever your decision, never say you weren’t warned. www.frontpagemag.com/fpm/2021/03/most-american-schools-are-damaging-your-child-dennis-prager

Christian parents of all people should be greatly concerned about the sad state of modern secular education. They need to be seriously considering other options. And this is not just a recent concern. One hundred years ago the great J. Gresham Machen wrote much on this matter. Let me offer just two quotes from him:

“But while tyranny itself is nothing new, the technique of tyranny has been enormously improved in our day; the tyranny of the scientific expert is the most crushing tyranny of all. That tyranny is being exercised most effectively in the field of education. A monopolistic system of education controlled by the State is far more efficient in crushing our liberty than the cruder weapons of fire and sword. Against this monopoly of education by the State the Christian school brings a salutary protest; it contends for the right of parents to bring up their children in accordance with the dictates of their conscience and not in the manner prescribed by the State.”

“I can see little consistency in a type of Christian activity which preaches the gospel on street corners and at the ends of the earth, but neglects the children of the covenant by abandoning them to a cold and unbelieving secularism.”

And here are a few newer quotes to round out this article:

“To control the future requires the control of education and of the child. Hence, for Christians to tolerate statist education, or to allow their children to be trained thereby, means to renounce power in society, to renounce their children, and to deny Christ’s Lordship over all of life.” R. J. Rushdoony

“We cannot continue to send our children to Caesar for their education and be surprised when they come home as Romans.” Voddie Baucham Jr.

“You cannot send all the Christian kids off to be educated in a school system that is riddled with rank unbelief, shot through with relativism, and diseased with perverse sexual fantasies, and then wonder at the results you get. And why are you not allowed to wonder about it? Because God is not mocked.” Douglas Wilson

“Your children will go to public school … and they will be trained for somewhere around 15,000 hours in ungodly secular thought. And then they’ll go to Sunday school and they’ll color a picture of Noah’s ark. And you think that’s going to stand against the lies that they are being told?” Paul Washer

As Prager said, you have been warned.

8 Replies to “The Great Dumbing Down”