OK, now that I have everyone absolutely flummoxed by my cryptic title, let me say it is a send up on the 100 Revs which I wrote about in an earlier post. The 100 Revs were supposed to be 100 reverends and pastors marching arm in arm with their homosexual buddies in the Gay and Lesbian Mardi Gras held last night in Sydney. 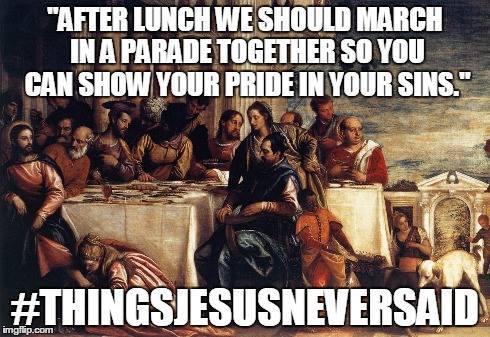 Undoubtedly these church leaders will seek to claim that they were just trying to be like Jesus, who was known as being a “friend of sinners”. That he was, but it was always with a view to leading sinners to repentance, forgiveness, and newness of life, not leaving them in their sinful, enslaved and God-denying condition.

Yes Jesus hung around with sinners, but so that they might see that God is calling them to renounce their life of sin and enter the kingdom of God by means of repentance and faith in Christ. That is a far cry from proudly marching arm in arm in a parade known for its glorification of sexual exhibitionism, debauchery and Christian-bashing.

The only message this bizarre gimmick sends to the wider community is that the church of Jesus Christ – or parts of it – has totally lost the plot, and is now making a mockery of God’s law, God’s holiness, and the purpose of the church in the world.

Indeed, why not march side by side with pedophiles in their next public celebration? The reasoning would be exactly identical. After all, believers have not always treated pedophiles as lovingly and with as much acceptance and tolerance as we might have.

And the same excuses and justification for homosexuality can be used for pedophilia. Pedophiles can’t help it, they were born that way. Plus what is wrong with a loving, consensual relationship? We should not discriminate against such loving relationships, and we should be ashamed of not granting them the same rights and privileges that married couples enjoy.

Indeed, while we are at it, I trust that these same leaders will also march in the next polyamory pride march. If believers are now to not only accept, but endorse and bless same-sex relationships, something regarded by God as an abomination, then why not group sex and group marriage as well?

Again, if it is a loving, committed and mutually consensual union, what is wrong with allowing three men, or four women, or any such combination, to do their thing? Indeed, who are we to judge such a relationship? Who are we to deny them their rights? Why should we be so discriminatory?

We must love everyone and accept them just as they are. It would be cruel to tell people that they can only enter the Kingdom of Heaven if they first agree with God that they are lost, and their sin is keeping them from a love relationship with God. It would be so intolerant to tell people there is a hell, and that those who reject God and his provision in Christ are heading in that direction.

So maybe these church leaders are right. We have been awfully intolerant, bigoted, narrow-minded and judgmental. Let’s just welcome every lifestyle, every activity, every behaviour, and pretend that God has no preferences how we live or how we express ourselves sexually.

Let’s just open the doors and say, there really is no such thing as sin. Jesus really did not come to die in our place. He just came to say all of us are fine just the way we are. He wants us to be ourselves and do what is natural. After all, if something is so natural, it can’t be wrong, can it?

One homosexual, writing in the Sydney Star Observer, said that it was a great idea that these church leaders were marching. “Shifts like this will mean enormous things for gay Christians, GLBT kids growing up in Christian homes, and for others whose adult relationships with friends and family are strained by religious-based prejudices.”

Exactly. And if these same Rebs march in fornication pride celebrations, that will also mean ‘enormous things for fornicating Christians, fornicating kids growing up in Christian homes, and for others whose adult fornication relationships with friends and family are strained by religious-based prejudices’.

Of course all this is exactly part of the long-term homosexual agenda: the complete and total acceptance and blessing of the homosexual lifestyle. They know that the Christian church is the last obstacle to this aim. Thus they are rapt that these gullible Rebs are handing them on a silver platter what they are seeking. The same homosexual author makes this clear:

“But as much as it will annoy some to hear it, our journey to equality will never be over until our community is accepted as part of the mainstream of Australian society. That doesn’t mean assimilation, it means integration – where two things grow together. And having groups like the 100 Revs, Surf Life Savers, the defence forces and the police in our parade shows homophobic Australia that it is we who are becoming a part of that mainstream while they are slipping into the fringe.”

Yes indeed, and those homophobic Christians really need to be set straight. These ten Rebs are doing just that: Paul of course was simply wrong when he said that no homosexual would inherit the Kingdom of God (1 Cor. 6:9-11). Nice of these Rebs to clear that up, and give us the real lowdown on what the Bible teaches about this subject.

Jesus warned about wolves dressed as sheep coming in to destroy the flock of God and to undo the work of God. I would say that the 10 Rebs are a pretty good example of what he was warning about.

7 Replies to “Marching with the 10 Rebs”