If anyone wonders why society is in such a mess, they simply need to look at our ruling elites. Many of our opinion makers, judges, movers and shakers, and intellectualoids tend to promote ideas, values and worldviews which are not only contrary to the sensible majority, but are often perverse, irrational and ungodly.

Our elites, in other words, are often quite happy to defend the indefensible, and to promote that which should in fact be shunned and censored. They advocate radical causes and push immoral and amoral agendas which simply lead to civilisational decline and social dysfunction.

There is never a shortage of examples of these secular activists who push all the wrong causes, and delight in all the wrong ideologies and lifestyles. Consider a report found in the current Weekend Australian. It concerns a former High Court judge of Australia who has given a speech in America, praising one of the most notorious sexual perverts in recent history.

This is how the article begins: “Michael Kirby, the first High Court judge to declare his homosexuality, has paid emotional tribute to the father of modern sex research Alfred Kinsey. In a speech in the US today, the retired judge will tell graduating students of Kinsey’s alma mater, Indiana University in Bloomington, that he felt less alone as a young homosexual when he heard of Kinsey’s bold work documenting the sheer variety of human sexual experience.”

Our elites of course think that Kinsey was a saint, and a major Hollywood film even featured his life and work. The film, like that of most portraits of Kinsey, amounts to little more than hagiography. But this man was no saint. The truth is, he was a sleazeball big time.

One of the most important exposes written of this evil man was Kinsey, Sex and Fraud by Judith Reisman and Edward Eichel (Huntington House, 1990). This book demolishes the many myths surrounding the sexologist, demonstrating that he was in fact little more than a low-life pervert.

But instead of me repeating this documentation, let me reprint a large part of an article I wrote five years ago when the film came out. My article makes it clear that there is nothing to celebrate about this man, but much to condemn and deplore. 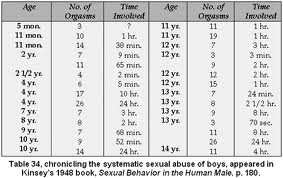 Kinsey of course is the notorious American sexologist (1894-1956), whose agenda was to soften up the public to the view that any and every sort of sexuality is permissible. He sought to convince us that there is no norm when it comes to human sexuality, and that we should embrace any sexual expression whatsoever. Here are some of his “findings”:

-All orgasms are “outlets” and are equally valid – whether between husband and wife, boy and dog, man and man or adult and child – for in sexual expression, normal is individually determined.
-The more “outlets,” the healthier the person – and beginning as early as possible is better than waiting.
-Human beings are naturally bisexual. Religious bigotry and prejudice force people into chastity, heterosexuality and monogamy.
-There is no medical or other reason for adult-child sex or incest to be forbidden.

People like Hugh Hefner of Playboy fame of course helped to carry out this agenda. And today we see the result of this social and sexual revolution: broken families, marriage disintegration, a tsunami of pornography, including child pornography, an epidemic of promiscuity and sexually transmitted diseases, skyrocketing abortion rates, a crisis in teenage pregnancies, an explosion of rape and sexual assault, and a culture that believes that hedonism is the highest good, and self control and restraint the greatest evil.

The 60s sexual revolution was the bitter fruit of the agenda being promoted by Kinsey. But the film, instead of questioning his research and giving it a critical examination, instead sugar coats the whole story, seeking to turn this committed atheist and social revolutionary into a saint.

Most people do not know that Kinsey collected data from imprisoned sex offenders, criminals, pedophiles and prostitutes. He took this obviously skewed data and tried to make the result appear to be normal and mainstream. But perversion masquerading as science is still perversion.

Many of the lies of the sexual revolution are based on Kinsey’s flawed conclusions, such as that children are sexual from birth, that sexual promiscuity is the norm, and that 10 percent of the population is homosexual. Indeed, the homosexual revolution owes much to Kinsey. As one reviewer in a homosexual paper puts it, “For the queer community in particular, Kinsey is a must-see film. Without this man, it’s seriously likely that the developing acceptance of gays and lesbians by society would not be anywhere near as progressed as it is today” (MCV, 14 January 2005, p. 8).

Thus a whole range of sexual activity that used to be frowned upon has become normalised because of Kinsey. But it is not only the fruit of his research that was dangerous; so too was the research itself. We know that Kinsey and his associates used children ranging from 5 months to fourteen years in his sex experiments.

For example, in Table 34 of his Sexual Behavior in the Human Male (1948), Kinsey sought to show that the youngest of children could be sexually active. He said that even “the youngest males, as young as 5 months in age, are capable of such repeated reactions [orgasms]”. In the table, four-year-old boys, for example, were sexually stimulated for 24 uninterrupted hours.  A five month baby is said to have produced 3 orgasms in an unspecified amount of time.

An eleven month baby is reported to have had 14 orgasms in 38 minutes. The book also examines some of the reactions to such “experimentation.” These ranged from “extreme tension with violent convulsion … gasping, eyes staring … mouth distorted, sometimes with tongue protruding … whole body or parts of it spasmodically twitching … groaning, sobbing, or more violent cries … more or less frenzied movements … extreme trembling, collapse, loss of color, and sometimes fainting … of subject.”  These reactions, recorded with cold, clinical precision, are nothing less than descriptions of criminal child abuse.

Remarkably, however, the study of the reactions concludes by noting that the subject “will fight away from the partner and may make violent attempts to avoid climax, although they derive definite pleasure from the situation.”  Does that sound like pleasure?  It sounds like child sexual assault of the worst kind.

And as one paediatrician noted, “these children had to be held down or subject to strapping down, otherwise they would not respond willingly.” Thus it is amazing that Hollywood should come out with this hagiography on Kinsey.

We have such huge problems with child pornography right now, and our entertainment capital will simply compound the problem. Indeed, the film will cover up a lot of details about Kinsey. For example, decades ago Kinsey renamed paedophilia as “cross-generational sexual contact”. And as mentioned already, Kinsey was quite happy to use paedophiles in his research on human sexuality.

Yet our former High Court judge sings the praises of this monster. And he was one of our leading judges. Is there any wonder why the culture wars are in full swing, and the attacks on faith and family and morality are so fierce? With elites like these, no wonder things are going down the gurgler so rapidly.

39 Replies to “In Praise of Perverts”