So, just back from another of the March for the Babies in Melbourne. (Actually, I am now in Sydney, so my apologies for a few hours delay here.) The annual march commemorating the 2008 Victorian abortion law which is amongst the most liberal in the world is the highlight of the prolife calendar, and this year’s may have been the best so far.

And as usual, it was an incredible study in contrasts: light versus darkness, love versus hatred. According to police estimates, 7000 people marched for the unborn child. There may have been at least 150 police on hand, and perhaps just 30-40 of the rent-a-crowd.

Last year the ferals caused tremendous damage in assaulting and attacking people – young and old – while the police did not do very much about it. See here for a blow by blow description of last year’s march: https://billmuehlenberg.com/2013/10/12/choosing-death-choosing-hate/ 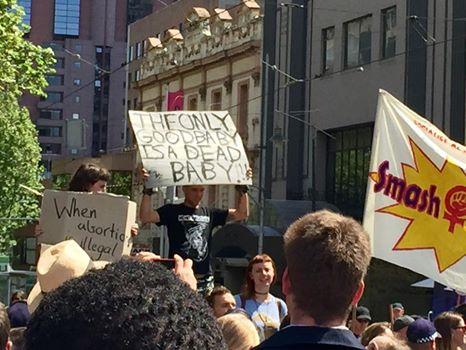 Because of that around 200 complaints were sent to the police. Last week we received a two page letter from the police apologising profusely, admitting they got it wrong, and promising to do much better this year. And they sure did. They were everywhere – on foot and on horseback. They did a great job of protecting us from the hate-filled mob.

The march first went direct from Treasury Gardens to Parliament House. A number of short talks were there delivered. Then we marched to an infamous abortion mill in East Melbourne, where a few more talks were given, then the march concluded.

The police were with us every step of the way. The first part of the march saw little trouble from the protestors. But at Parliament House they surrounded the crowd on three sides with screaming, drum-beating, and non-stop interruptions. The police moved them into one main area where they carried on the whole time, trying to drown out the speakers.

Strange, last night in Lakemba in Sydney’s west a hate-preacher of Islam was telling a small crowd about how evil Australia is and how it must come under seventh-century sharia law. There were no protestors there. There were no crowds seeking to drown out his voice. There were no demos.

But here we had 7000 people who simply wanted to show their love and concern for the unborn, and we have these screaming banshees treating us as if we were a bunch of Nazis. Go figure. Their signs said it all really. One large sign held high by a very angry young man actually said this: “THE ONLY GOOD BABY IS A DEAD BABY!”

I kid you not. There were other equally appalling signs, such as “Cory Bernardi is a failed abortion”. The anger, rage and diabolical ugliness of these protestors was really something to behold. These really were manifestations of the demonic.

A large pro-life sign on a truck was spray-painted with graffiti, with words like “racist”. Umm, what does racism have to do with protecting babies? “Smash sexism” was another dopey sign. Again, what does loving babies have to do with sexism? Both male and female babies are horribly killed by abortion.

There was even a pamphlet being handed out by the radicals, pretending to be from our side. It was entitled: “You call this pro-life? Anti-abortion, white supremacy and the clash of civilizations.” Oh, now those who love the unborn are white supremacists as well. It featured four apparently really evil people: Senator Cory Bernardi, MP Bernie Finn, Lord Monckton, and one Bill Muehlenberg.

Now Cory was not even there, and I was not a speaker (the other two were however). But according to the pamphlet, the four of us were not only responsible for this evil pro-life rally, but we are the epitome of evil in this nation. In this pamphlet which is strewn with absolutely incredible lies and distortions, they even claim I said that Christians should use force and war against all Muslims.

But telling lies for a cause of genuine evil – the killing of the unborn – is par for the course for this mob. Indeed, it was all the usual suspects: the socialists, the anarchists, the Sex Party, and all the usual hate crew. And 2000 years ago we were told exactly why such bold lies would come about.

Paul in Romans 1:18 spoke about “all the godlessness and wickedness of people, who suppress the truth by their wickedness”. Unrighteousness always leads to the suppression of truth, and we had plenty of that on hand today. To stand for life and love makes us altogether evil, while those who seek to scream and shout us down are portrayed as paragons of goodness.

One highlight for me was when I chatted with three pro-aborts. We went back and forth for a while, and then I finally asked them this: “So let me get this straight – you say you are against all killing?” “Yes” a gal shouted back. “But you are in favour of killing the unborn?” I said. They hummed and hawed, and the gal said, “Yes, I am pro-abortion.” No further comments necessary!

The second stage of the march is when things really started to get out of hand. As we marched the radicals made a number of attempts to break free of the police lines and charge at us and attack us. This is where the police really shone brightly. They protected us wonderfully, putting up with horrific hatred and abuse and a non-stop stream of profanities.

One enraged protestor charged right at us, and a policeman downed him with a superb flying tackle. A lady commented that if he was with the Sydney football club, they might have won the Grand Final. Time after time they attempted to rush at us and attack us, and time after time the police repelled them.

We kept applauding the police and thanking them and telling them we were praying for them. Often you would find a group of 10 or 15 of them running to the next trouble spot, to keep us protected from the furious pro-aborts. They really did do everything they could to protect us. Well done police!

Another glaring juxtaposition was seen during this second stage of the march: to our right the angry protestors were seeking with demonic energy to break the police lines, while to our left a newly married couple were walking along. The love and peace of the newlyweds and the love and peace of the prolifers contrasted so greatly with the frenzied, furious and ferocious demonstrators who seemed to be consumed with hatred and demonic rage.

Love versus hate. Light versus darkness. The contrast today was apparent for all to see. Well does Scripture say: “All that hate me [God] love death.” We certainly saw that today as well. Those who hate God the most hate life the most. They prefer darkness, death and deceit. We must keep praying for these folks.

Many thanks again to Bernie Finn and crew who made this march happen and made it so successful. Thanks to the 7000 who braved the hate brigade. Thanks to people like Sonja who organised a pre-march lunch which around 40 folks attended. Thanks to one and all.

I really cannot see any reason why anyone should miss it next year. I will see you then.

33 Replies to “When Love and Hate Collide”