When the militant homosexual lobby and its supporters tell you no one will be adversely impacted when homosexual marriage goes through, they are lying. They knew full well that everything changes – for the worse. Everyone must bow the knee and submit fully to the homosexual jackboot.

In my recent book Strained Relations I documented around 170 cases of this happening. There I offer one shocking case after another of ordinary citizens being dragged over the coals by employers and governments, resulting in fines, the loss of jobs, and even imprisonment.

Try telling these folks that homosexual marriage will not impact them. And while you are at it, try telling Kim Davis this. She is a committed Christian and a Kentucky county clerk who will not allow her faith to be violated by the militants.

She has been another supersaint, standing strong for her faith in the face of severe persecution. Her story goes as follows: 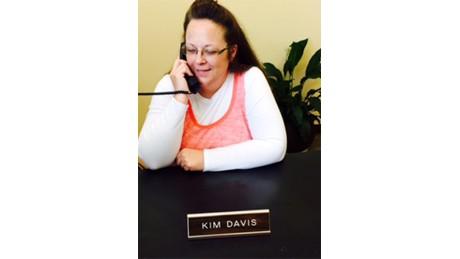 Davis’ office has steadfastly denied marriage licenses since the Supreme Court legalized gay marriage this summer, and that practice continued Tuesday morning when at least two same-sex couples were denied as Davis invoked “God’s authority.” Rowan County Attorney Cecil Watkins says the federal court alerted him later Tuesday morning that a hearing was scheduled for 11 a.m. Thursday in Ashland. Watkins says clerk Kim Davis is summonsed to attend, along with all the deputy clerks who work in her office.
After Davis initially stopped issuing marriage licenses, two gay couples and two straight couples sued her. A federal judge ordered her to issue the licenses, an appeals court upheld that decision and the Supreme Court on Monday declined to intervene in the case, seemingly leaving Davis with no legal ground to stand on.
But Davis has refused to issue the licenses, saying her deeply held Christian beliefs don’t let her endorse gay marriages.
As an elected official, Davis can’t be fired. Any impeachment of her would have to wait until the legislature’s regular session next year or could come during a costly special session.
“I have received death threats from people who do not know me,” Davis said in the statement. “I harbor nothing against them. I was elected by the people to serve as the County Clerk. I intend to continue to serve the people of Rowan County, but I cannot violate my conscience.”

Another recent report says this:

A homosexual duo left the Rowan County, Kentucky, clerk’s office early Tuesday “red-eyed and shaking,” according to the Associated Press, after the clerk, citing “God’s authority,” refused to issue them a marriage license despite a court order.
Clerk Kim Davis’ appeal to the U.S. Supreme Court to stay a lower court’s order to issue the licenses was rejected late Monday.
On Tuesday, she was barraged by catcalls of “bigot” when she met people lined up waiting for services.
AP reported James Yates and Will Smith Jr. “marched” into the office to get a marriage license. Davis, however, continued her position of not issuing marriage licenses for anyone in response to the U.S. Supreme Court decision June 24 creating a right to “same-sex marriage.”
Law-enforcement officers told both “gay”-rights activists and the clerk’s supporters to leave.
Randy Smith, who was among Davis’ supporters, said he was aware that Davis might go to jail on contempt charges for defying the federal court order.
“But at the end of the day, we have to stand before God, [who] has higher authority than the Supreme Court,” he said.
When asked on whose authority she would not issue licenses, Davis replied, “Under God’s authority.”
One homosexual activist said, “We’re not leaving until we have a license,” AP reported.
“Then you’re going to have a long day,” Davis reportedly said.

Kim Davis recently issued a very strong statement about why she is risking everything for her Christian convictions:

I have worked in the Rowan County Clerk’s office for 27 years as a Deputy Clerk and was honored to be elected as the Clerk in November 2014, and took office in January 2015. I love my job and the people of Rowan County. I have never lived any place other than Rowan County. Some people have said I should resign, but I have done my job well. This year we are on track to generate a surplus for the county of 1.5 million dollars.
In addition to my desire to serve the people of Rowan County, I owe my life to Jesus Christ who loves me and gave His life for me. Following the death of my godly mother-in-law over four years ago, I went to church to fulfill her dying wish. There I heard a message of grace and forgiveness and surrendered my life to Jesus Christ. I am not perfect. No one is. But I am forgiven and I love my Lord and must be obedient to Him and to the Word of God.
I never imagined a day like this would come, where I would be asked to violate a central teaching of Scripture and of Jesus Himself regarding marriage. To issue a marriage license which conflicts with God’s definition of marriage, with my name affixed to the certificate, would violate my conscience. It is not a light issue for me. It is a Heaven or Hell decision. For me it is a decision of obedience. I have no animosity toward anyone and harbor no ill will. To me this has never been a gay or lesbian issue. It is about marriage and God’s Word. It is a matter of religious liberty, which is protected under the First Amendment, the Kentucky Constitution, and in the Kentucky Religious Freedom Restoration Act. Our history is filled with accommodations for people’s religious freedom and conscience. I want to continue to perform my duties, but I also am requesting what our Founders envisioned – that conscience and religious freedom would be protected. That is all I am asking. I never sought to be in this position, and I would much rather not have been placed in this position. I have received death threats from people who do not know me. I harbor nothing against them. I was elected by the people to serve as the County Clerk. I intend to continue to serve the people of Rowan County, but I cannot violate my conscience.

Yet again we see the intolerant activists, coupled with the heavy arm of the rainbow state, seeking to break the will and the resolve of ordinary men and women who choose to put the Lord Jesus Christ over and above the tide of filth and perversion sweeping the land.

These are modern day Christian martyrs, standing steadfast for biblical truth despite everything the gaystapo can throw at them. I and others have been warning about this for many years now. We said this is exactly where we would get to when we start granting special rights to this militant sexual lifestyle group.

This is only the tip of the iceberg. It is getting worse every single day. Please, stand with Kim Davis. She is a hero who needs our prayers and needs our support. And thank God for those groups offering her real tangible help, such as Liberty Counsel.

Also, thank God for others, such as the Foundation for Moral Law in Alabama. As they say in a press release:

The Montgomery-based Foundation for Moral Law, a nonprofit corporation established to defend the Constitution as written and the right to acknowledge God in the public arena, stands firmly with the Kentucky clerk who refuses to issue marriage licenses for same-sex couples….
Foundation President Kayla Moore called Ms. Davis a “woman of exemplary courage who is willing to risk her career to stand for what is right.” Ms. Moore added, “I hope and pray that millions will be inspired to follow her example.”
Foundation Senior Counsel John Eidsmoe said, “The reason the Supreme Court’s Obergefell fails to command respect is that it has no basis in the Constitution. Rather, it is simply an edict of five unelected lawyers, two of whom had no business deciding the case because they had themselves performed same-sex marriages. To regain the respect of the American people, the Court needs to interpret the Constitution for what it says rather than what the Justices wish it said.”

It is time for all true Christians to stand against the rainbow warriors and their war on faith, family and freedom. Thank you Kim Davis for leading the way.

14 Replies to “Rainbow Reality: Submit or Else”