My case is quite simple: in the West, much of our leadership and mainstream media is overwhelmingly anti-Christian. At the same time it is predominantly secular left, and usually pro-Islam as well. Thus almost every opportunity will be used to engage in anti-Christian bigotry, while supporting the agendas of minority groups which so often hate God, Christianity and freedom.

Examples of this are to be found every day, and yesterday we had more cases of how the media and our leadership tend to operate. Consider the two tragic shootings, one in America and one in Australia. In America a number of Christians were deliberately targeted by a gunman, one who was proud to be an angry atheist. 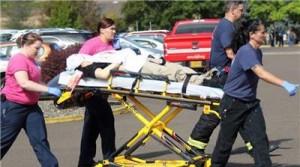 While most media reports played down or ignored altogether the twin facts of an atheist killer and Christian victims – including President Obama – some media outlets managed to spill the beans, as this one did:

A gunman singled out Christians, telling them they would see God in “one second,” during a rampage at an Oregon college Thursday that left at least nine innocent people dead and several more wounded, survivors and authorities said.
“[He started] asking people one by one what their religion was. ‘Are you a Christian?’ he would ask them, and if you’re a Christian, stand up. And they would stand up and he said, ‘Good, because you’re a Christian, you are going to see God in just about one second.’ And then he shot and killed them,” Stacy Boylen, whose daughter was wounded at Umpqua Community College in Roseburg, Ore., told CNN.
A Twitter user named @bodhilooney, who said her grandmother was at the scene of the carnage, tweeted that if victims said they were Christian, “then they were shot in the head. If they said no, or didn’t answer, they were shot in the legs.” Gunman Chris Harper-Mercer’s disdain for religion was evident in an online profile, in which he became a member of a “doesn’t like organized religion” group on an Internet dating site.

And in Sydney yesterday we had yet another Islamic attack on our streets, this time at a police station, resulting in one being killed, along with the assailant. A news item on this (one of the few to suggest the ‘I’ word – although not actually using the term) runs as follows:

The gunman who shot dead a police staffer was a 15-year-old who had visited Parramatta Mosque on his way to commit murder. The teenager, a naturalised Australian who arrived with his family from Iran, had walked to the police headquarters in Charles Street from his home in North Parramatta before opening fire on a civilian police employee. Police are today trying to track down the teenage killer’s family who may have left the area.
His victim was a father-of-two, a son and a daughter, who is understood to have worked in the finance area for police.
Witnesses have said that after shooting dead the civilian employee, the teenager ran up and down in front of police headquarters waving his handgun in the air and shouting: “Allah. Allah.” It was then that two special constables on security duty ran from the police building and shot the gunman dead.

OK, so another Muslim closely following the Islamic faith goes on a killing spree, yet most folks in the media still can’t bring themselves to mention the ‘M’ word or the ‘I’ word. Our leaders and the media instead skirt around the blatantly obvious, and fear to even come close to stating the true religious motivations here.

The bottom line in all this – once again – goes like this: We just had Christians shot and killed in Oregon by an atheist, and police shot and killed in Sydney by a Muslim. And the media reaction to these obvious hate crimes? Crickets chirping – at least as to the obvious motivations here.

But just imagine if things were reversed. If Christians were killing atheists or Muslims, this would be front page news and everyone would be calling for the closing down of Christian churches and saying what a hate-filled and violent religion Christianity is.

The government, the media and the commentariat would all at least be demanding inquiries into the Christian religion and organised Christianity, asking why this is such an evil and violent religion. Most ruling elites, the chattering classes, and the intelligentsia would be making a strong case that it is time something is done about the violent faith of Christianity.

And this is just what happens anytime anyone claiming to be a Christian, or even just assumed to be a Christian, does anything out of line. We are told with full assurance that these are hate crimes and stern punishment must be meted out.

But when it comes to atheists or Muslims, then we do everything we can to downplay any ideological or religious motivation. We instead bend over backwards making excuses for them, especially when it comes to Islamic jihadist attacks. We are assured that this was just a lone wolf, and that it had nothing to do with Islam, a religion of peace we are told.

On another site a friend rightly just said this: “Yeah it seems out of the Oregon shooter, the Sydney shooter and Troy Newman, Troy Newman is the most evil and sinister of all three.” Exactly. Her concern and mine is not just about the overwhelming reluctance of most of our politicians and the media to dare mention Islam or atheism.

Indeed, according to the lamestream Australian media, neither of these two killers were anywhere near as bad or as ideologically motivated as the really bad dude of recent days, Troy Newman. The American pro-lifer has of course just been unceremoniously booted out of our country because he believes babies deserve a chance to live and not be slaughtered. In the eyes of most of our elites, he is the really bad guy out of the three.

Such are the utterly warped and bankrupt values of those now calling the shots in Australia and the West. In their jaundiced eyes, Muslims never kill people in the name of Islam, and atheism has nothing to do with any evil done in its name.

But if anyone who even comes close to being a Christian does anything not in sync with the secular left value system and worldview, then they are immediately demonised and treated as scum. Muslim and atheist killers we must tolerate, learn to “understand,” and be sympathetic with – but monsters like Christian prolifers merit no mercy.

The simple truth is this: there is a very real war between good and evil out there. And guess what: Christians are not the bad guys here. Those who hate God and Christians are often the problem. Those who adhere to a political ideology which demands the killing of infidels are the problem.

Someone just mentioned to me about a quote heard on FoxNews by Bill O’Reilly concerning the Oregon shootings. While I do not consider him to be much of a conservative or much of a Christian, he got it right on this occasion:

“All the gun control laws in the world won’t stop maniacs from committing murder. . . . As the world becomes more secular, civilised restraints to bad behaviour drop. Anything goes if you believe in nothing. It seems the Oregon killer was targeting Christians. That doesn’t surprise me. There’s an intense battle between good and evil on this earth.”

It certainly is a battle and it certainly is heating up. And as our ruling elites justify the real bad guys while continuously vilifying and attacking the good guys – Christians – then you know things are simply going to get a whole lot worse in the West.

All of this perfectly fits in with what the prophet Isaiah said so long ago: “Woe to those who call evil good and good evil, who put darkness for light and light for darkness, who put bitter for sweet and sweet for bitter” (Isaiah 5:20).

8 Replies to “Our Ruling Elites and their Anti-Christian Agenda”