I am not sure which is worse: the actions being described here, or the blasé matter-of-fact way they are being reported. It is as if a news report is describing someone building a house or getting a new job – ho-hum, next story. But this is an utterly shocking story, and the mainstream media and so much of our culture has lost the ability to be shocked anymore.

It is as if all our warnings about the consequences of homosexual marriage have been realised, but no one cares at all. ‘Yes you were right’ they might say, ‘but so what?’ ‘Who am I to judge?’ ‘Love is all that matters.’ ‘We should not discriminate.’

All the brainless clichés used to promote homosexual marriage are now being used to promote and excuse every other form of sexual perversion. Into a bit of polyamory? Hey, no biggee. It is all cool. After all, if two men can marry, why not three, or four, or five? The sky’s the limit.

And of course who gives a rip about the poor children dragged into this nightmare? No mother, but three “dads”. It seems that the war on children is now all but complete. The demands, wants and lusts of adults must now trump everything and everyone, including the needs and rights of the child. 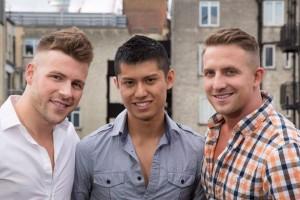 Children are simply pawns and guinea pigs in adult social engineering games. Anything goes in the brave new world of fake families and social experimentation. Nothing is forbidden in this scary world of the social activists and the gender benders.

The only thing that is verboten today is to actually call out such arrangements, and show some disagreement with them. Those who dare to differ are the only problem, and as we see now on a daily basis, they will be dealt with by the heavy hand of the law. ‘You will embrace the new sexual dystopia or else!’

While this story is an utter shocker, it comes as no surprise whatsoever for those of us who have been fighting all this for decades now. We warned years ago that all this would happen. We were of course mocked, laughed at and vilified for making such suggestions.

We were told that we were nutjobs, fear-merchants and troublemakers. Now everything we predicted is happening right before our very eyes, yet no one bats an eyelash. This story is so bizarre and tragic, but as I say, it is even more tragic that those reporting on it seem to think it is completely normal.

Let me quote parts of the article for you.

A ‘throuple’ of men are planning to start a family together – with the help of their sisters. Adam Grant, Sebastian Tran and Shayne Curran are part of a polyamorous three-way relationship. The handsome trio all live together in Nova Scotia in Canada, and are planning to complete their unconventional family with the pitter patter of tiny feet.
The threesome, who all work in the medical profession, hope to conceive three children together with the help of Shayne’s sister as a surrogate – whilst Seb’s sister will donate her eggs. Sebastian, 29, said: “We definitely see kids in our future. We would love to have three children altogether of our own genetics if possible and we have a plan on how we’re going to make that happen.”

Oh, OK, they are “handsome” men, so I guess that makes everything hunky-dory. Just a few decades ago everyone would have referred to these three as perverted men, twisted men, evil men, sick men, or totally irresponsible and reckless men, but today we can only remark on their outward appearance. The story continues:

Adam and Shayne met in 2009 and the pair got married two and a half years later. After a year of wedded life, they met Sebastian in a nightclub in September 2012 and immediately hit it off. And last year, Adam and Shayne got divorced so that Seb could be properly included in their arrangement.
Medical Administration student, Shayne, 29, said: “We’re the happiest we’ve ever been – all our dynamics and personalities work so well in a relationship. The three of us bring out the best in each other.”
Nursing student, Adam, 27, added: “We didn’t want Sebastian to be excluded or feel like the third wheel in our relationship. So Shayne and I decided to get a divorce so that we could make a renewed commitment between the three of us instead.
“We want to make sure that we’re all equally bound and obligated to each other in marriage.” Adam and Shayne first met in a nightclub over six years ago and married in 2011. And a year into their marriage, they decided to become more open-minded with their relationship.
Shayne said: “Adam and I wanted to have a little more fun so we decided to experiment with multiple partners. We never intended it to be anything serious, we certainly never planning on taking on a full-time third partner by any means. It was just bit of sexual experimentation.
“So one night, Shayne and I were in a nightclub with some friends. Sebastian caught our eye. He was dancing to ‘Gangnam Style’, which we found hilarious and we thought he was really cute.” Adam said: “We started chatting to Sebastian and the conversation just came really easily. After leaving the nightclub, we went home with Sebastian and spent the whole evening with him.

Ah yes, the homosexual lifestyle: getting “married” without the slightest intention of lifelong monogamy and faithfulness. They “wanted to have a little more fun”. Well, why not? Committed relationships are so boring and so unexciting. So let’s be on the prowl for fresh blood.

And with all the unrestrained sex and swinging, let’s throw some kids into the mix. If we can choose what kind of car we like or apartment to get, we can equally make some choices about kids. It is all part of our groovy lifestyle, in which various accessories are available just for the asking.

Want a new red sports car? No probs. Want a few kids too? No problemo. Welcome to the new world of instant gratification with zero responsibilities. It is all about me, me, me. Anything goes in this carefree world of unchecked hedonism and unbridled selfishness. But read on:

Shayne said: “I have two sisters who have both offered to carry our children for us as surrogates and are willing to donate their eggs as well. My sisters actually argue over which one them will carry our baby first – I feel very lucky.”
“Meanwhile Sebastian’s sister will probably donate her eggs too so we can keep it in the family. We want to mix our genes enough so that our kids are as genetically close to us as possible. But, we are open to adoption too. Children are a huge part of our future plans.”
The threesome insist their relationship is like any normal couple’s – having dinner with one another, looking after their two dogs Tito and Tux, and sharing a bed together. Shayne said: “We all sleep in a king size bed together – it’s necessary when there’s three people in a relationship.”
The trio hope to show that polyamory is a perfectly acceptable choice of life and love. Adam said: “We just want to say that love is love. It should be multiplied not divided. It shouldn’t matter if you’re in a three-way or a four-way relationship.”

Yeah sure it’s normal. Yeah sure, it’s all about “love”. Yeah right. These guys don’t know the first thing about love. All they know about is lust, pandering to self, and to hell with everyone and everything else. Welcome to our brave new world where the only thing that matters is total selfishness and absolute moral, social and sexual anarchy.

And children will be the biggest losers here.

17 Replies to “What Slippery Slope? Throuple-Mania”