Here is a truth you can bank on: Satan absolutely hates children and is doing all he can to destroy them. He hates all of mankind of course, but he knows that if he can get to us while still young – or better yet, while still in the womb – he can be much more successful in his war against every good thing God has made.

Child abuse is about as far away as you can get from the will of God. Jesus offered very strong warnings for those who would harm children, and today we live in a society that routinely and proudly harms children. Despicable sex ed programs targeting even toddlers is also part of this demonic war on children.

So too is the radical homosexual agenda, and now the raging transgender agenda. As always, the activists know who to target: our vulnerable and innocent children. To get everyone fully into their diabolical agenda, they know that attacking our children is the best way to go about this.

And don’t just take my word on these matters. Many from the other side have admitted to all this. In my book The Challenge of Homosexuality I quote a number of these folks. Let me offer just two paragraphs from that book:

Consider also the words of American feminist and lesbian Tammy Bruce who penned an important volume back in 2003 called The Death of Right and Wrong. In it she said this:

The radicals in control of the gay establishment want children in their world of moral decay, lack of self-restraint, and moral relativism. Why? How better to truly belong to the majority (when you’re really on the fringe) than by taking possession of the next generation? By targeting children, you can start indoctrinating the next generation with the false construct that gay people deserve special treatment and special laws. How else can the gay establishment actually get society to believe, borrowing from George Orwell, that gay people are indeed more equal than others? Of course, the only way to get that idea accepted is to condition people into accepting nihilism that forbids morality and judgment.

My review of this important book can be found here: billmuehlenberg.com/2005/09/29/a-review-of-the-death-of-right-and-wrong-by-tammy-bruce/ 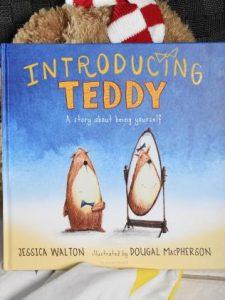 And as mentioned, right now the gender benders are especially doing Satan’s dark bidding. They are deliberately, actively and defiantly going after our children, and they make no apologies for it. Indeed, they are loud and proud about it and openly celebrate it.

She’s the world’s first transgender teddy bear and she’s about to achieve worldwide domination. If only life was as beautifully simple and unprejudiced as a children’s book. Thomas-now-Tilly the teddy’s journey began five years ago when Jess Walton’s father came out to her as transgender in a parked car in Fairfield. Three years later, after having a child of her own, the ex-teacher was searching desperately for kids books which showed a positive message about gender diversity but could find nothing. So she wrote her own: a Teddy called Thomas knows in his heart he’s a girl who wants to be called Tilly, and her friends accept her that way. Self-published last year as a “passion project”, Introducing Teddy will be published globally through Bloomsbury next week after making worldwide waves. “It’s been a real whirlwind, sometimes I cant really believe that it’s all happened,” said the Pakenham mum who is expecting another baby soon with her wife.

Yep, let’s work overtime to convince innocent little children that there is no such thing as male and female, and that they can be whatever they want. Let’s indoctrinate them from the youngest age to ignore everything about biology and reality. Let’s just treat them as guinea pigs in the adult culture wars.

And never mind all the harm this does to children. Never mind what experts like Paul McHugh are saying about all this. I have quoted him a number of times before. His qualifications here are second to none. As he writes:

For forty years as the University Distinguished Service Professor of Psychiatry at Johns Hopkins Medical School—twenty-six of which were also spent as Psychiatrist in Chief of Johns Hopkins Hospital—I’ve been studying people who claim to be transgender. Over that time, I’ve watched the phenomenon change and expand in remarkable ways.

He looks at the issue carefully and concludes his important article this way:

The most thorough follow-up of sex-reassigned people—extending over thirty years and conducted in Sweden, where the culture is strongly supportive of the transgendered—documents their lifelong mental unrest. Ten to fifteen years after surgical reassignment, the suicide rate of those who had undergone sex-reassignment surgery rose to twenty times that of comparable peers.
In fact, gender dysphoria—the official psychiatric term for feeling oneself to be of the opposite sex—belongs in the family of similarly disordered assumptions about the body, such as anorexia nervosa and body dysmorphic disorder. Its treatment should not be directed at the body as with surgery and hormones any more than one treats obesity-fearing anorexic patients with liposuction. The treatment should strive to correct the false, problematic nature of the assumption and to resolve the psychosocial conflicts provoking it. With youngsters, this is best done in family therapy.
The larger issue is the meme itself. The idea that one’s sex is fluid and a matter open to choice runs unquestioned through our culture and is reflected everywhere in the media, the theater, the classroom, and in many medical clinics. It has taken on cult-like features: its own special lingo, internet chat rooms providing slick answers to new recruits, and clubs for easy access to dresses and styles supporting the sex change. It is doing much damage to families, adolescents, and children and should be confronted as an opinion without biological foundation wherever it emerges.

And yet here we have adults actively pushing our poor children into this disordered and dangerous path. Shame on them. Jesus said it would be better if such people had large millstones hung on their necks and they were cast into the sea. That is how strongly Jesus felt about the diabolical attacks on our children.

And we should feel exactly the same way.

11 Replies to “The Diabolical Assault on our Children”