Homosexual marriage changes everything. I and others have made this warning for decades now. And on a daily basis we see the frightening truth of this. Everyone is impacted by such radical social and legal changes. We are all at risk. And Christians are especially being targeted.

I have documented numerous cases of anti-Christian bigotry both in my books and on my website. One could monitor all this on a full time basis, and still have a hard time keeping up. Here are more cases of the attack on faith and freedom by the homosexual militants.

But these are also stories of courageous Christian resistance. Here I offer three recent stories coming out of North America of steadfast believers who have refused to bow the knee to the rainbow gods, but have stood fast, even when that means suffering very real consequences. 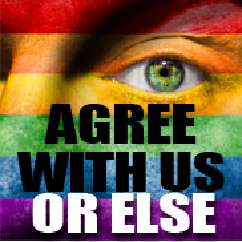 The first story comes from Illinois:

A Christian’s 14-year career is being threatened because he refused to watch a training video on lesbian, homosexual, bisexual, transgender, and queer “diversity and inclusivity.” In April, the Social Security Administration announced all employees must be trained in LGBTQ “diversity and inclusivity.” Longtime information technology employee David Hall, whose Christian convictions do not consider sodomy healthy or normal or good for people, believed that the “training” was against his sincerely held beliefs.
Specifically, Hall, 42, was told by his superiors to view a 17-minute video that includes “tips for increasing cultural awareness in a diverse and inclusive environment.” Hall refused, explaining that the training endorses sinful behavior. “I’m not going to certify sin,” he explained to WCIA-TV….
“David Hall is a hero,” Americans for Truth president Peter LaBarbera told LifeSiteNews. “He is absolutely correct: LGBT ‘diversity’ sessions and films are NOT truly ‘diverse’ because they disrespect or ignore faith-based and moral opposition to homosexualism and transsexualism. Hall is also correct that this is pure propaganda, designed to legitimize a sin movement. Ironically, people are getting fired and disciplined simply for refusing to bend their faith to appease an Orwellian ideology that purports to be about — get this — ‘non-discrimination!’”

The second story comes from Canada:

A Canadian pastor is standing firm after being ordered to allow gay-straight alliances to be formed at his Christian schools. According to reports, on Sept. 2, Alberta Education Minister David Eggen sent a letter to Brian Coldwell, the chairman of the Independent Baptist Christian Education Society and pastor of New Testament Baptist Church, to demand that he allow the alliances at his two schools as per provincial law.
Coldwell runs Meadows Baptist Academy and Harvest Baptist Academy in Parkland County. Earlier this year, Eggen sent a letter to school boards throughout the province, advising that officials must draft and submit policies by the end of March surrounding how they would accommodate homosexual and transgender students. But Coldwell told CBC News that he would not comply.
“I have a duty as a pastor to protect the flock of God,” he said. “And there is no way under heaven I’m going to allow gay activists to come in here and basically undermine our ministries and our religious freedoms or confuse and corrupt our children.”
“To be able to come into religious institutions, Christian schools, churches and demand that they can set up their GSA clubs and have a platform to advance what I would call anti-Christian, hostile liberal, secular values that really undermine our Christian faith,” Coldwell said.

Last year, a county clerk in Kentucky was jailed for refusing to issue homosexual marriage licenses. Now a county clerk in Florida is fighting a similar battle. Broward County Clerk Yanicka Parker was fired for asking her boss to have someone else in the clerk’s office issue a marriage license to gays. Parker explained to Clerk of Courts Howard Forman that as a Christian and a minister she could not condone sodomy because of her sincerely held beliefs.
As soon as she received an interdepartmental email stating all employees must perform wedding vows and issue licenses for homosexuals, Parker requested an accommodation. She also asked to be transferred or reassigned to a department that did not require officiating homosexual unions.
When a statewide ban on homosexual marriage was rescinded on January 6, 2015, she again asked that someone else in the large Broward County Clerk’s Office perform those duties, which constitute only a fraction of her work. Even though several other clerks were available to issue gay marriage licenses, Parker was summarily suspended and sent home on leave.
On Wednesday, January 7, 2015, the same thing happened. After she asked that others perform a ceremony for gays, she was suspended from her job and sent home. The following Monday, the 12-year veteran of the clerk’s office was fired.

You can find the links below if you want to read these shocking stories in full. These are just a tiny sampling of what is happening all over the West. Christians are being targeted by the activists, and religious freedom is being trampled on.

Australia is not immune from this, and I have highlighted many cases of this happening here. Let me offer just one more example. It concerns the launch this week of the new book on homosexual marriage by David van Gend, Stealing from a Child. It is getting off to a bumpy start:

Yesterday, the publisher, Connor Court, was notified by the printer, McPherson’s, in writing: “Due to the subject matter and content of your book, unfortunately I have been instructed by senior management not to proceed with printing this title.” McPherson’s is a printer in regional Victoria now owned by OpusGroup, headquartered in Sydney.
McPherson’s has had a ten year relationship with Connor Court, publishing controversial books such as Ian Plimer’s best-seller, Heaven and Earth, and Cory Bernardi’s Conservative Revolution. Never before has the publisher known a printer to refuse to print a book on political grounds.

David van Gend offered these comments on this alarming move by the printer:

This was a shock, because you don’t expect a printing firm to act as a political censor for the gay lobby. It is also a shock because it comes just days after the Mercure International Hotel in Sydney cancelled the venue for our big gathering of groups opposing same-sex ‘marriage’, after gay activists threatened hotel staff if they let us meet there.
We had to find a different venue in Sydney at short notice, and we will have to find a different printer at short notice – but we will not be silenced. I defy anyone to find a single word in my book that should not be printed. I can understand the gay lobby being worried about a book that so clearly exposes the harms of genderless ‘marriage’ and of the whole genderless package deal that comes with it, but they should not try to shut down our side of the debate by banning a book!
We have been through this censorship already, with our TV Ad last year for the Sydney Gay and Lesbian Mardi Gras banned at the last minute by SBS – but that led to widespread condemnation of SBS, and I hope this act of political censorship by a corporation gets the condemnation it deserves. We are meant to be an open society where great issues are debated freely. What’s the difference between burning books and banning them being printed?

So here we have the stories of four different Christian heroes standing strong in the face of real opposition and ferocity from the homosexual lobby. We need more such champions of the faith, and champions of marriage and family. Will you be one of them?