The drug legalisation activists are ever at work to push their agenda, and any excuse will do to further bring about their aims. When reports about how people die from drug overdoses make the news, for example, they will argue that we must stop criminalising this behaviour in order to save lives.

Thus there is a recurring push for things like needle vending machines, heroin injecting rooms and the like. It is all part of the goal to fully allow all drug usage, and to knock back harm prevention strategies. They will run with what they call “harm minimisation” policies, but this is actually a counsel of despair. 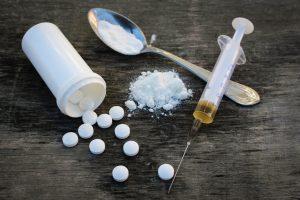 Today for example we heard about more calls for injecting rooms, this time in Melbourne. As one very recent news report states:

Drug addicts would be given free needles and medical help to shoot up in a safe injecting room in North Richmond, under a radical plan to be considered by State Parliament. A coalition of community leaders and medical experts is backing Sex Party leader Fiona Patten’s push for an 18-month trial of a legal injecting room in the inner suburb.
They say it would clean up drug-plagued streets on which 34 people died last year. They were among 172 fatal heroin overdoses in Victoria. Former premier Jeff Kennett, criminal lawyer Robert Richter, QC, City of Yarra mayor Amanda Stone and leaders of the Australian Medical Association and the Salvation Army are among those who have thrown their support behind the proposal.
A person collects syringes from the ground in a carpark in Richmond. Ms Patten will this week introduce a Bill in the Legislative Council for the 18-month trial, modelled on a safe injecting room in Kings Cross in Sydney.

Actually, there are all sorts of major problems with these sorts of proposals. As I wrote back in 2012:

The case against heroin injecting rooms is quite simple. Every time the addict shoots up it may be his last hit. To provide state-sanction for such dangerous activity is irresponsible in the extreme. It is playing Russian roulette with the addict’s life. Even earlier advocates like Prof Penington in Victoria stopped calling them “safe” but “supervised” injecting rooms. Heroin can never be safely injected, any more than one can safely play with a live hand grenade.
Injecting room advocates often make deceptive arguments, such as: “What would you prefer, having addicts shoot up in dangerous, dirty back alleys or have addicts shoot up in clean, medically-supervised rooms?” Of course if these are the only two options, the latter is to be preferred. But this is a false dilemma. There is a third option: not shooting up at all. Shooting galleries do nothing to encourage addicts to get off drugs.

Since the Melbourne activists are quite happy to mention the Kings Cross example, it is well worth looking at how this has panned out. A few years back there was an excellent 69-page report on the Kings Cross injecting room. It was an invaluable study on the activity there, and it found it to be sorely wanting. Early on in this well-researched report it said this:

THE CASE FOR CLOSURE
In 1999 the NSW Government’s Drug Summit recommended the trial of a safe injecting room on three grounds: 1. it should decrease overdose deaths, 2. it should provide a gateway to treatment and 3. it should reduce the problem of discarded needles and users injecting in public places Further: It should provide safety to injectors living with the threat of overdose.
But it: 1. demonstrably failed to save even one life 2. had very poor referral rates to treatment or rehab 3. it in no way reduced the problem of discarded needles and therefore of public injection 4. demonstrated that safety was not a concern for clients.
Objections to the injecting room were that it would: 1. increase drug taking 2. increase drug trafficking 3. create a honey-pot effect for drug dealers around the injecting room.
THE EVIDENCE HEREIN INDICATES THE INJECTING ROOM DID ALL THREE
This document seeks to reproduce or otherwise direct its reader to all relevant evidence cited in the Drug Free Australia publication on the failure of the Kings Cross injecting room. Where the analysis examines the statistical claims of the injecting room’s evaluation report, step by step methods of calculation are reproduced for ease of verification.

In the report various myths about injecting rooms are carefully dealt with:

Myth 1 – All heroin overdoses are fatal (used by the injecting room to get public support for its introduction) “Darke et al. (1996) showed that an ambulance attends in 51% of non-fatal overdose events and Darke et al. (in press) reported an estimate of 4.1 fatal overdoses for every 100 non-fatal overdoses in the community, . . .”
Myth 2 – Most heroin overdoses are in public places (used by the drug legalisation lobby to justify the existence of injecting rooms) “The majority of deaths occur in a private home. Studies typically report that approximately half of all overdose fatalities occur in the victim’s own home, while one-quarter occur in the home of a friend or relative. This pattern also holds true for non-fatal overdose, with only 10 per cent of users reporting that their last overdose occurred on the street.”
“However, some distinct regional differences have been noted in relation to location of death. Darke, Ross et al. (2000a) noted that among the 191 fatalities in Kings Cross and immediate surrounds 47 per cent died in home environments, 25 per cent in hotel rooms and 19 percent in public places.”
Myth 3 – Heroin overdoses are caused by street heroin cut with toxic contaminants (used by drug legalisation lobby to justify a heroin prescription trial) “Two popular misconceptions, among both heroin users and the wider community, are that the major causes of opioid overdose are either unexpectedly high potency of heroin or the presence of toxic contaminants in heroin. The evidence supporting these notions is, at best, sparse. “If overdose were a simple function of purity, one would expect the blood morphine concentrations of fatal overdose victims to be significantly higher than living intoxicated heroin users. As described above, it has been found that many individuals who die of an opioid overdose have blood morphine concentrations at autopsy that are below the commonly accepted toxic dose.”
Myth 4 – The MSIC ensures no first time users or pregnant women use the facility. The injecting room uses a 20 minute interview at registration that relies on the self-reported disclosure of age, pregnancy or user status. If you are a good liar you could probably get in.
Myth 5 – The only way high-risk drug users can be reached by health professionals is via the injecting room. Extensive needle exchange services have operated for years in Kings Cross to provide non-judgmental access to needles and syringes and a chance for health workers to build relationships which will encourage users towards treatment.
Major Causes of Heroin Overdose
“The evidence of polydrug use in fatal overdose is consistent with the experience of non-fatal overdose victims, particularly in terms of alcohol and benzodiazepine use. Overall, overdoses involving heroin use alone are in the minority. ALCOHOL APPEARS TO BE ESPECIALLY IMPLICATED, WITH THE FREQUENCY OF ALCOHOL CONSUMPTION BEING A SIGNIFICANT PREDICTOR OF OVERDOSE.”
A recent decrease in tolerance to opioids has been proposed as a possible explanation for the low blood morphine levels typically seen in overdose victims.

The report finished with four recommendations:

1. That the injecting room be closed and the funding redirected to establishment of more beds in rehabilitation centres which focus on ultimate abstinence from use of illicit drugs.
2. That the NSW Government follow the lead of the WA government and significantly fund naltrexone implants for those wishing to become abstinent (including drug-dependent prisoners).
3. That the NSW Government examine the Swedish model and its restrictive drug policies. This includes the adoption of strong policing of street selling and a replication of the Cabramatta model which resulted in a significantly lowered overdose rate (policing of supply and demand).
4. That the NSW Government examine abstinence-based rehabilitation programs which have shown considerable success, including Australian programs such as the Salvation Army and Drugbeat (South Australia), as well as international programs such as Hassela (Sweden), San Patrignano (Italy) and Daytop International or Phoenix House (United States).

It is this sort of thorough research that needs to be carefully considered in regards to the Victorian proposal, and throughout all of Australia. Dangerous drugs are illicit because of the great harm they cause. To put up the white flag of surrender and allow free and easy access to these harmful drugs is not how we help people.

It is instead how we greatly harm people, and so we must reject these radical and counterproductive proposals altogether.

11 Replies to “Say No to Drug Injecting Rooms”