It is official: South Australian Liberal Senator Cory Bernardi has exited the Liberal Party, forming his own conservative party. The decision was made just moments ago as parliament resumed for the year. It is already causing huge waves both within and without of the Liberal Party. 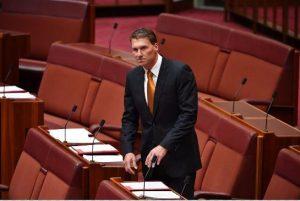 Claiming it was a difficult decision for him, and a reluctant one, he said he felt that it was the right one to do. He said that the current system is now bogged down in expediency and self-serving ends. The political class is out of touch with ordinary Australians, he also said.

In a press conference he said that his new party, the Australian Conservatives, will be the new vehicle in which he will move. He mentioned the million voters who, at the last federal election, abandoned the Liberals and went with many of the smaller parties. It is this group of disaffected voters whom he especially will seek to harness and run with.

And already, numerous former Liberal colleagues of his are denouncing him and turning against him. Their bitter recriminations are simply proof positive of the very things Cory has been talking about. These Libs are not the real conservatives, nor are they the ones the bulk of Australians can any longer countenance.

Various reasons for the move can be recounted here:

-the 2015 backstabbing of Tony Abbott by Malcolm Turnbull
-the lack of key conservative actions of late, such as repealing Section 18c of the Racial Discrimination Act
-the lacklustre performance of Turnbull and the Liberals, reflected in low polling
-keeping genuine conservatives languishing on the back bench without real leadership roles and positions
-far too much vacillation by the Libs on key conservative concerns such as natural marriage and the defence of life
-the need to stand strong on things like creeping sharia and stealth jihad
-the 50,000 members already signed up to his newly formed Australian Conservatives movement
-similar big changes to mainstream politics around the Western world

The last reason can be looked at a bit more closely: First we had Brexit, and then we had Trump – two big blows to politics as usual and big government hegemony. Also, we have Marine Le Pen who will run for the French presidency with a good chance of winning, and Geert Wilders and his party with a very strong chance of taking power in the March Dutch elections.

There is a widespread move amongst the masses against business as usual, rather useless two-party systems, and unresponsive political leadership. For good or ill, these new leaders – call them what you will: mavericks, rogues, populists, renegades – are appealing to so many who are fed up with governments, parties and leaders who are out of touch, beholden to political correctness, and unconcerned about their very real needs and aspirations.

This is a people power revolution which is sweeping much of the West. Leaders who can harness this discontent and overwhelming desire for change will ride the crest of a wave, and Cory has sensed it is time for something similar here in Australia.

Of course how this all plays out remains to be seen. Will other smaller parties and their leaders join in, or stay as rivals, further splintering the conservative vote? For example, how will Pauline Hanson and One Nation react? Will they hop on board? According to Miranda Devine, it may already be a done deal:

Popular One Nation Senator Pauline Hanson says she would be willing to join forces with maverick Liberal Cory Bernardi if he goes through with a suspected plan to quit in the new year and start his own conservative party. In a stunning proposal that would send shockwaves through the Coalition, Hanson told me on 2GB radio on Monday that she would even consider ceding control of her party to Bernardi in order to lock in conservative voters disillusioned with the Coalition.
“I have a lot of respect for Cory,” she said. “I’d love to work with him or join forces. If Cory wants to take over [One Nation] so be it but at the end of the day it has got to be on the issues that I want to fight for the people.” Many of One Nation’s policies, especially its opposition to Islamic extremism, accord with views expressed by Bernardi, who was sacked from the Coalition front bench by Tony Abbott for making politically incorrect comments about same sex marriage and has remained in exile under Malcolm Turnbull.

Then there are the various smaller Christian and family parties, such as the CDP, the Australian Liberty Alliance, Australian Christians, Family First, Rise Up Australia, the DLP, and so on. Will any of these groups throw in their lot with Bernardi?

It is a momentous day in Australian politics, without doubt. The way it all plays itself out is something we will have to wait on. But it is a start in perhaps a new and much-needed direction. We shall see. In the meantime, Go Cory!

26 Replies to “Cory Bernardi and Lixit”