Three years ago hardly anyone was talking about transgenderism. Today it is as common as the common cold – only much more dangerous. Of course for decades the homosexual agenda has everywhere been foisted upon us, but now this follow-up move against reality is being pushed everywhere as well: the gender bender revolution.

Not a day goes by when we do not find this topic being promoted all around us, with the mainstream media happy to do its bit in the indoctrination process. It is bad enough when adults are being negatively impacted by all this, but increasingly our children are becoming the direct targets of the militants. 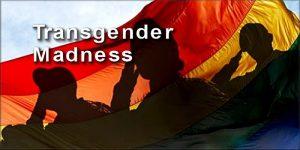 -“At three years old, Samuel saw the doctor and became Olivia”
-“‘When will I get a vagina?’ How a two-year-old born as a boy knew she wanted to become a girl”
-“Minority of children with gender issues diagnosed with gender dysphoria, psychiatrist says”

And just as homosexuality has become the flavour of the month – indeed, the flavour of the past few decades now – resulting in plenty of impressionable young people trying it out in the interests of being “cool,” so too now we find our kids are checking out all things transgender.

As one recent headline put it, “Teens are becoming transgender because it’s trendy, expert says”. The story opens as follows:

Children think it’s cool to be transgender and they’re trying the self-identity out in droves, claims an Australian psychiatrist. Psychiatrist Stephen Stathis, who runs the gender clinic at Brisbane’s Lady Cilento Children’s Hospital and is responsible for diagnosing gender dysphoria, reports that “many” youth are “trying out being transgender” in order to stand out. Apparently, declaring oneself “transgender” is trendy. “One said to me, ‘Doctor Steve … I want to be transgender, it’s the new black,’” Stathis related.

Wow. This new war on our children is part of the greater war on biology, on reality, and on humanity. Given that this is now being promoted in every way possible, plenty of concerned commentators have been speaking out about all this, and rightly so.

Given that I have just picked up two new books and they both have chapters on this topic, let me quote from each one. The first is The Snapping of the American Mind by David Kupelian (WND Books, 2015). He begins his chapter by noting how similar the transgender condition is to other worrying conditions, such as anorexia nervosa.

Such people can be skinny as a rake yet look into a mirror and actually believe they are fat. We have the same with the trans crowd: “Whether it’s the anorexic or transgender individual staring intently into the mirror and seeing the exact opposite of reality, or millions of others in similar straits tormented from within with myriad obsessions, compulsions, addictions, and delusions, our minds and emotions are – very simply – capable of lying to us, to the point of seriously disrupting our lives.”

All these conditions have been written up in the psychiatrists’ bible, the Diagnostic and Statistical Manual of mental Disorders. Yet one of the most extreme of these conditions is not found there, one which “often involves the amputation of healthy body parts, and whose sufferers have one of the highest suicide-attempt rates of any population on earth.”

For some reason this group is “in the process of being de-pathologized; that is, reclassified as normal. Indeed, the recent renaming of gender identity-disorder as gender dysphoria, thanks to pressure from the powerful LGBT lobby, means the condition itself is no longer considered abnormal or ‘disordered’ at all.”

He examines a number of studies on this condition, highlighting the very real harms and dangers associated with it, then says this:

Unfortunately, sooner or later, there is always a very big price to pay when a society willfully denies reality. The LGBT movement has not only succeeded in mainstreaming behaviors all previous generations considered pathological and immoral; it also insists that the rest of society not only accept these behaviors, but affirm and celebrate them – or be punished.

It looks at numerous cases of this already occurring, and then says in conclusion:

Is it not madness to think we can transform a man into a woman by surgically fiddling with his plumbing and feeding him hormones – when every single one of his body’s 37.2 trillion cells is permanently coded “male” with Y chromosomes? Paul R. McHugh, Johns Hopkins Hospital’s former top psychiatrist, affirms it simply is “biologically impossible” to change the sex you were born with, and that those who advocate “sexual reassignment surgery” are thus promoting mental illness.

Matt Walsh in his brand new book The Unholy Trinity (Image, 2017) also has a chapter on this. He begins by noting that those who are insane cannot distinguish between truth and fantasy. A “transgender” person is attempting to transcend or go beyond his or her biological gender – an impossibility, as just mentioned.

Walsh too looks at folks with obsessive delusions about their body, such as anorexics, and notes how those with “gender identity disorder” are in the same camp. But the progressives have managed to make that terminology anathema, and they now speak of “gender dysphoria,” a condition that “treats the subject’s feelings, not their disordered identity, as the problem.”

Thus transgenderism puts feelings above everything else: “My self-identity trumps my actual identity. Reality becomes subservient to desire.” And this is all part of the progressives’ war on morality, on society and on the family. And never mind just how contradictory all this is.

The progressives have always insisted that gender is a social construct. But the trans madness flatly contradicts all this:

If gender is indeed a social construct, then it seems the ultimate goal would be a culture where men can wear sports bras and yoga pants and still be considered men. But progressives defeat their own point by next telling us that when a man acts like a woman, he actually is one, which is odd considering they just got through telling us there’s no such thing as “acting like a woman.”
They went from insisting that “social constructs” prevent men from wearing bras to insisting that if a man wears a bra he should promptly get himself a pair of breasts to go with it. They’ve not only reinforced gender stereotypes, but given them a power not even the most ardent gender traditionalist would have ever conceived of.

Progressivism has officially declared jihad upon reality. If our culture cooperates – if we relent and concede that science is relative and human beings are gods who can choose their own biological makeup, if the Left jumps over this shark and into the dark waters of full-fledged insanity, and if many in our society take the plunge right along with them – then there will be no stopping liberalism. The culture is irretrievably lost….
We either draw a line here and make a final stand for objective truth – declaring without equivocation that some things, like our sex, are real and absolute – or else we give up and play along and tell ourselves that truth never mattered all that much anyway.

Yep, the stakes really are that high. For the sake of our culture, our sanity, our families and our children, we must take a stand before it is too late. It is time to transcend the trans militant’s agenda and return to reality, before we lose it all.

3 Replies to “The Transgressions of the Trans-Reality Activists”