Mark and Ben are homosexuals and they have been together as a couple for 15 years. Thus they are prime candidates for voting yes on the homosexual marriage plebiscite – right? Um, no. They have made it perfectly clear that they will vote no in the upcoming postal plebiscite.

This will come as a surprise to many, but they say they already have equality under the law and face no discrimination, and they have no need of marriage. Wow. All this came from an amazing radio interview from a few days ago. 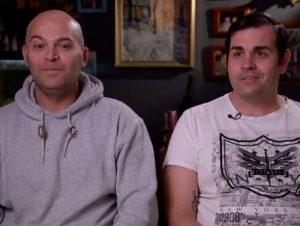 Mark Poidevin had the courage to appear on a strongly pro-homosexual radio station, Wave FM 96.5. He shocked the two hosts of the show when he said they did not want marriage. Please have a listen to this brief but important conversation that took place: www.youtube.com/watch?v=KY9YzQNryUk&sns=fb

Mark said this about where they are now at as a couple: “As a gay person I don’t feel I’m discriminated against. My partner and I have wills in place, power of attorney-ship, and that can protect you.” He went on to say that they are quite content as is, and see no need for marriage.

While he said he faces no discrimination from others because of his homosexuality, he has gotten a lot of flak from other homosexuals for daring to say no to homosexual marriage: “I agree I’m probably a minority in the gay community that feel that way, and I sometimes feel I’m bullied for having that view…”

Amazing – he is being bullied alright, but not by straights or Christians or conservatives, but by other homosexuals! Interesting that.

This story has since exploded in the media, shocking many along the way. What!? Homosexuals who do NOT want marriage redefined to include them?! Yes, there certainly are many such folks out there. The ABC for example picked up on their story:

Ben Rogers and Mark Poidevin oppose same-sex marriage and feel their views are immediately dismissed as homophobic. The couple met 15 years ago on a website called Gay.com. They say it was love at first sight.
“We’ve been through our ups and downs like anyone else, but I love him dearly and there’s no-one else I’d like to spend my life with than him,” Mark said.
While the Wollongong couple have committed to each other for life, their views on same-sex marriage are not what you might expect. “I used to be a supporter of same-sex marriage. I mean, I proposed to Ben five years ago,” Mark told 7.30.
“At the time Ben said it wasn’t for him, that he didn’t believe in it, and I said, ‘When the laws change, would you like to?'” When Ben refused Mark, he told him he had never thought same-sex couples should get married. “It’s not something I had ever envisioned.”
Ben said while he respects that other couples might want to wed, he is committed to preserving traditional marriage. “There’s never been any discrimination with any of our families, or dramas coming our way because of our sexuality,” he said.

One newspaper report said this about the pair:

The couple said heated debate on both sides leading up to the postal survey could result in a shock result if the vote goes ahead — like the election of US President Donald Trump or Brexit. “The campaign’s gotten nasty on both sides and I think the comments that I hear are, ‘You’re a homophobe if you don’t support gay marriage,’” Mr Poidevin said.
“I’m a gay person here that’s coming out and saying, ‘Well, no it’s not. It’s your right to have a view, your right to have a view either way and people should be respected.’ You’re not intolerant if you don’t support a view.”
Social media users slammed the duo, saying all couples should have the right to marry.

Yep, they are now taking a real hammering – from the tolerance brigade! The militant homosexual lobby is one of the most intolerant groups around, and when you dare to defy their agenda – even if you are a homosexual yourself – you will be targeted big time.

Yes these two men are clearly bigoted, intolerant and hateful homophobes! How dare they offer a counter-narrative to the homosexual lobby. How dare they think for themselves. How dare they try to do what they want, instead of what they are being told to do by the activists.

Well, they are two rather brave men in my books. And we can add them to the growing list of homosexuals who are clearly and forthrightly against homosexual marriage. I just recently penned a piece on how various Australian homosexuals are opposed to it:

And see also this short listing of homosexuals from outside of Australia who also are against homosexual marriage:

Well, I am quite happy to burst their bubble and deflate their fake news stories. Thank you Mark and Ben for being willing to do the same.

9 Replies to “These Homosexuals Are So Homophobic”