Evidently it is not good form to rub it in and say things like ‘we told you so’. But, well, we DID tell you so. I and others repeatedly sought to alert people to this. We warned you for years. We pleaded with you to wake up and listen. We did all we could to sound the alarm and sound the trumpet.

Yet most of these warnings fell on deaf ears. What were we warning about? The homosexual agenda in general, and the ramifications of legalised homosexual marriage in particular. We warned that there is a militant agenda at work, and that once we go down the path of legalising fake marriage then everything will change.

Every day we see this militant agenda in action, and every day we see the ugly fallout from giving homosexual marriage the green light. Just in case folks have forgotten, I even wrote books about all this. And I penned seemingly countless articles about this very matter. 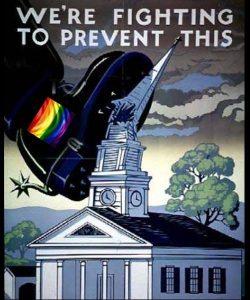 Let me remind you of just a few pieces on this. Twenty-five years ago for example I warned about these things:

Twenty years ago I tried to alert folks as to the grave implications of granting special rights to homosexuals:

Eight years ago I tried my best to warn folks about the massive threat of running with homosexual marriage:

I penned many dozens of articles on this matter. A few more:

People thought I was a broken record, saying these things over and over again. They not only refused to believe me and others, they just wanted us to go away and shut up. “You are just a fear-monger!” “That will never happen.” “You are just stirring up hate and division.” “The church will never be impacted by this.” “You are so negative!”

I personally heard such claims made over and over again especially by clueless Christians. Most believers refused to believe that there were any problems. Most felt that I and other watchmen on the wall were just being troublemakers and intolerant and unloving.

Of course many Christians still have no problems with these attacks on Christian education. But those that are now worried about this may be part of the “too little, too late” movement. I am aware of all sorts of Christian churches that said and did NOTHING before homosexual marriage was passed in Australia.

Now a few of them are speaking out on things like the threat to religious liberty. Um, why in the world did these churches and church leaders not do such things BEFORE that fateful vote went through? Why did they simply ignore or even scoff at our warnings for decades? So now some are trying to play catch-up ball. But it may be too late folks.

However, any resistance – as late as it may be – is still worth supporting I suppose. One noted example of this hit the press yesterday. It seems the Sydney Anglicans have decided enough is enough and have sought to draw a line somewhere. Here is how one news report covers their welcome resolve:

The Sydney Anglican diocese is set to ban same-sex weddings from any Anglican church or building, and prohibit its properties from being used to promote homosexuality or “transgender ideology”. Critics within the church say the far-reaching policy could stop pastors and teachers from speaking in favour of marriage equality, and stifle student-led LGBTI support groups at Anglican schools.

Documents obtained by Fairfax Media also reveal the church sees the current debate about its right to fire gay teachers as a “key threat” to its ability to foster a Christian ethos at its schools. The 51st Synod of the Sydney diocese will next week debate the introduction of a property policy to ensure church-owned buildings are used only for “acts or practices which conform to the doctrines, tenets and beliefs of the diocese”.

The policy specifies it would be inappropriate to use church-owned property for “advocacy for transgender ideology (e.g gender-fluidity)” and “advocacy for expressions of human sexuality contrary to our doctrine of marriage”. It also bans local Anglican boards from allowing property – such as school halls – to host same-sex marriages or receptions associated with same-sex weddings.

While we would have liked to see such firm resolve run with years ago, I am glad at least one church body has woken up to the very real threats we face, and is seeking to make a strong stand. Of course we will have to wait until next week to see how the Synod actually proceeds on these issues. Please keep them in prayer.

To find some churches and church leaders with a bit of backbone is getting to be rather rare of late. Hopefully other churches will join them in standing for biblical principles and values and stop running with worldly, secular and relativistic agendas.

In the meantime the persecution of Christians continues apace overseas. Countries which have run with homosexual marriage and the like have seen a spike in blatant cases of anti-Christian bigotry. Consider just one of the latest examples coming out of the US:

A Christian couple who owns a media company is suing the state of Minnesota after being threatened with fines and imprisonment if they refuse to make films involving same-sex marriage. Carl and Angel Larsen, through their company Telescope Media Group, want to enter the wedding industry, but due to their religious beliefs do not want to create films celebrating same-sex marriages.

The religious liberty law firm Alliance Defending Freedom, which is representing the Larsens in the suit, said in a Tuesday news release that the couple faces steep fines, including compensatory and punitive damages of up to $25,000, and up to 90 days in prison if they fail to comply with Minnesota’s public accommodation law.

ADF filed suit at the U.S. 8th Circuit Court of Appeals on Tuesday challenging the constitutionality of Minnesota’s law, arguing it “illegally controls artistic expression — violating the Larsens’ freedom to choose which messages they will express, and refrain from expressing, through their films.”

“The government shouldn’t threaten filmmakers with fines and jail time to force them to create films that violate their beliefs,” Tedesco said in a news release announcing the suit. “Carl and Angel are storytellers — they script, stage, conduct interviews, capture footage, select music, edit and more — all to tell compelling stories through film that promote their religious beliefs,” he added.

Wow, another shocking example of the war on Christianity. Thankfully America is so much better than Australia in that it has a number of Christian legal groups which take on these cases, and have often won in the courts. Australia could sure use some of these groups here.

But just add this example to the hundreds of others I have shared over the years. War has been declared against the Christian faith, and the homosexual and transgender militants are leading the charge. Some of us have warned about this for decades now.

Will some Christians now finally start to wake up and face these challenges? Or will it be more business as usual? Will we keep sleeping through our own execution?

26 Replies to “Rainbow Repression: We Told You So”