For those not in the know, there was a by-election yesterday in Sydney for the federal seat of Wentworth. This seat just happened to be held by the Liberal Party and their conservative forebears ever since Australian federation 117 years ago. Now it is held by an independent: lesbian activist Kerryn Phelps. 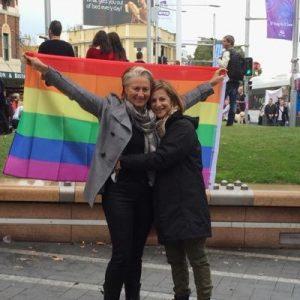 The latest result of the two-party preferred vote is 49% for Sharma of the Liberals and 51% for the independent Phelps. Whatever way we slice it, this was a massive slap in the face for the Liberals. Imagine having conservatives holding a seat for over a century and then losing it so spectacularly.

The Liberals have lost their slim majority and we now have a hung parliament. The former Prime Minister Tony Abbott had a handy majority, but was knifed by Turnbull; and when Morrison returned the favour recently on Turnbull, Malcolm decided to turn on his own party, quit, and force this by-election, knowing full well that this chaos would result.

Andrew Bolt offers a summary of the events of Turnbull’s deplorable reign of terror:

Liberals must never forgive Malcolm Turnbull or welcome him to its ceremonies. He undermined and knifed a Liberal Prime Minister. He lost 16 seats at the next election. He lost five by-elections last July. He lost every poll in nearly two years. He robbed the Liberals of identity by dragging it from its conservative roots. Replaced, he forced a needless by-election in his seat, knowing its loss would cripple a government clinging on with just a one-seat majority. He then undermined the Liberals’ bid to defend this seat it can’t afford to lose, refusing to help the Liberal candidate with even a single tweet. He sat by as his son campaigned against the Liberals.

Of course Turnbull originally wanted to be with Labor, so that tells us all we need to know about the guy. And now the country is in big trouble. The latest the government can go – if it lasts that long – until the next federal election is May 2019.

But voices are already calling for an election before then, if not now! Things will simply be chaotic and unstable from here on in. Thanks Malcolm. Some folks are wondering if that was his plan all along! And Turnbull’s son Alex celebrated the result in a tweet: “Incredible result and proud of the people of Wentworth. A hearty congratulations to @drkerrynphelps who fought a great campaign. A great day for Australian democracy.”

What an utter debacle the Liberals have become with people like Turnbull in the party. Taking one of their safest seats and losing it is mind-boggling. And for genuine conservatives and Christians alike, all this is a real worry. Now we have yet another militant lesbian and leftist MP in our parliament.

It seems we are getting more and more homosexuals, atheists, Muslims and radical leftists into parliament, and the devoted Christian can only look on this with great concern. As but one clear example of how this destabilised parliament with even more radicals may play itself out, consider the Christian schools’ issue.

I have written a number of pieces recently about the war declared on Christian education. Plenty of politicians (including the defeated Sharma) have been calling not only for an end to the right of Christian schools to determine what students they have, but what staff they have as well.

It may well be the case now that in just a matter of weeks – or months at most – Christian schools will be fully forced to have homosexual students and staff. One domino after another keeps falling, and all our warnings have fallen on deaf ears.

As a Christian I cannot look at politics alone. I must always seek to see the spiritual implications of all this. And as I have said so often following various elections, we must keep several biblical truths in mind. One, politics is not everything, and politics cannot save.

Yet the Bible speaks plenty about how righteousness exalts a nation, while the opposite tears it down. I have written before about the old saying that a people will get the ruler they deserve. It seems that as Australia becomes increasingly secular and hostile to the things of God, it is getting leaders who will simply make matters worse.

It is getting to be very hard times for Christians indeed in Australia. This election, coupled with other recent events, should send shudders down the spines of every true believer. Just a few days ago Queensland voted to have open slather on abortion.

They now follow Victoria and Tasmania in having some of the most liberalised abortion laws in the world. And the Victorian election is coming soon: November 24. The state has nearly been ruined by the hyper-radical Dan Andrews and Labor.

If they get back in again Victoria really is toast. Then we need to look to become political refugees – and maybe head to Hungary or Poland! All these massive defeats and setbacks may well be indications of God’s just judgment on a wayward and sinful people who have forgotten God and turned their backs on God.

And the church is not exempt from this. The amount of apathy, compromise, and carnality found in our churches today is absolutely heart-breaking to behold. The number of Christians capitulating to the homosexual agenda is staggering for example.

So is our utter disregard for the slaughter of innocent life. Just a little over a week ago we had our annual march for the babies. With at least 100,000 Christians in Melbourne, we should have had 10 to 20,000 Christians marching for life. Yet only a fraction of this turned up.

God hates the shedding of innocent blood, and his plans for human sexuality are clearly stated in Scripture. Yet most Christians do not seem to give a rip about any of this. So if what we see all around us is indeed the judgment of God, it is well deserved, and Christians have by and large brought it upon themselves.

Of interest, as some of us were watching the election results last night, another television station ran with an old movie classic: Battle of Britain (1969). It tells the story of how a handful of brave British pilots stopped the Nazi bombings on England in 1940.

It was about their heroism and resolve that Churchill famously said on August 20, 1940: “Never in the field of human conflict was so much owed by so many to so few.” Absolutely. My wife pointed out some spiritual lessons from all this.

The RAF had far fewer planes and pilots than the Luftwaffe. The latter were better trained and had more combat experience. They should have won handily. But the fighting spirit of the Brits, stirred on by inspirational speeches by Churchill, helped to save the day.

We seem to be in the same place today in Australia and the West. Everywhere we look we see the other side outgunning us. They have all the money, all the activists, all the media support, and often most of the political support. They seem invincible.

Our side is just a motley crew of individuals – mothers and fathers and others who are trying the best they can to raise their families and serve their God in a toxic culture. The odds are all against us. We are out-flanked, out-gunned, and out-numbered. So we should all be defeated by now.

But there are always some brave Christian soldiers who not only know all about the battles we face and how important they are, but are willing to personally sacrifice everything and get involved. And many have paid dearly for this. Many have been maligned and abused and vilified and bullied.

We are in a war folks. It is ultimately a spiritual war, but it has social, political and cultural ramifications. When a war is on, no one has the luxury of sitting on the fence. Everyone must get involved. From a political point of view last night seemed disastrous.

But God is still on the throne, and he has not finished with us yet. It is now time that all Christians stir themselves out of their slumber and get involved in the battles of the day. The consequences of this are huge. And as we get involved, perhaps one day our ultimate commander in chief will say of us, “this was their finest hour”.

33 Replies to “Wentworth and the State of the Nation”