Some of you may have heard about the recent stoush between Chris Pratt and Ellen Page. I must admit, I had known next to nothing about both of them. But with a bit of sniffing around, it seems that both are actors. Or should I say actor and actress? Or should I say act-persons? Whatever.

But it seems Pratt is actually a Christian who goes to church. That in itself will land you in the Hollywood sinbin. And worse yet, he might attend a church that might look askance of homosexuality. But let me piece together the background to this public controversy.

Evidently Pratt appeared last week on Stephen Colbert’s “Late Show” and talked about a 21-day Daniel Fast that he and his church were involved in. Said Pratt, “Daniel was a guy who only ate fruits, vegetables and grains.” It turns out that he attends the Zoe Church, which is modeled after Hillsong Church, and he has also attended Hillsong Church in the past. 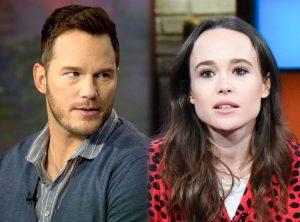 Things did not stop there. It seems that Ellen Page, who is a “married” lesbian, really did not like Pratt talking about his faith. She attacked him on Twitter, saying this: “Oh. K. Um. But his church is infamously anti lgbtq so maybe address that too?”.

She then tweeted: “If you are a famous actor and you belong to an organization that hates a certain group of people, don’t be surprised if someone simply wonders why it’s not addressed. Being anti LGBTQ is wrong, there aren’t two sides. The damage it causes is severe.”

Pratt then replied on Instagram Tuesday: “It has recently been suggested that I belong to a church which ‘hates a certain group of people’ and is ‘infamously anti-LGBTQ.’ Nothing could be further from the truth. I go to a church that opens their doors to absolutely everyone.”
www.deseretnews.com/article/900055666/chris-pratt-denies-his-church-is-anti-lgbtq-hate-has-no-place-in-my-or-this-world.html

And then Hillsong put out a press release on Thursday saying: “Hillsong Church loves ALL people.” The release began:

We would like to clarify and correct the following misinformation that has appeared in several media outlets recently: Hillsong Church does not preach against anyone or any group; we are not ‘anti-anyone’. We are an inclusive Christian church that loves, values and welcomes all people, regardless of their background, ethnicity, beliefs, values, or personal identity.
hillsong.com/media-releases/hillsong-church-loves-all-people/

So there you have it. But a number of important questions arise here, not just about Hillsong but about many churches and their take on the issue of homosexuality. So let me try to pick apart the various layers of this issue, especially in light of what Hillsong has just said.

As to allowing anyone in our churches to hear the gospel, as opposed to actual membership, I have discussed that at length elsewhere. In one such article I said this:

Of course anyone is – or should be – welcome to come to church and to hear the gospel being preached. The doors of the church should be wide open in this sense. We do not exclude anyone from hearing biblical truth and the claims of the gospel. The gospel, after all, is for sinners.

But this is not always what these folks have in mind. They want to take this further and say that unregenerate sinners can not only come and hear sermons in our churches, but can become fully involved in the life and fellowship of the church as well. The reason they can think this way is because perhaps most churches today have long ago abandoned any notion of church membership – and along with it, church discipline. Thus the physical doors are just as wide open as are the theological doors.
billmuehlenberg.com/2015/07/11/church-visitors-versus-church-members/

So it really depends on what exactly they mean by saying “Hillsong Church loves ALL people.” It can be a good and biblical sentiment, or it can be a radically bad and unbiblical one, depending on where they are coming from. And sadly this is not the first time Hillsong has sent out some real worrying messages and actions in terms of homosexuality and Christianity.

I have spoken before about seemingly pro-homosexual actions and statements from Hillsong – or at least rather ambiguous ones:
billmuehlenberg.com/2013/12/27/keeping-the-masses-happy-while-keeping-god-unhappy/

But here I want to look at one more thing mentioned in their recent press release. They went on to say this: “Hillsong Church was founded in 1983 by our Senior Pastors, Brian and Bobbie Houston and in all those years Pastor Brian has been a vocal opponent of gay conversion therapy and has made it clear to our pastors that we do not support that approach.”

Now that, in my eyes, is a real worry. We expect militant homosexual activists and atheists to fully oppose help for homosexuals. But when megachurches get in on the act!? Good grief! Indeed, even the very term, “conversion therapy” is the other side’s phrase, not ours.

It is used by the homosexual lobby all the time in a derogatory and pejorative fashion, implying that Christians are going around kidnapping homosexuals off the streets and forcing them to “convert” to straightness. Of course nothing could be further from the truth.

When Christians and others speak of “reparative therapy” it has to do with just one thing: if a homosexual is struggling with his or her same-sex attractions and wants some help and counsel, and wants to maybe even get set free from all this, they should be able to get that help. That is what is being offered here.

No one is forcing anyone to do anything. But if a homosexual desperately is seeking some help in this area, he should have the right to get it. But all over the West this is being denied them. In many places this is being made illegal! For those wanting more information on this, I have written a number of articles on “Conversion Therapy””

So a vitally important question here is this: does Hillsong believe that it is wrong to offer such help to struggling homosexuals? Yes or no? If yes, then they have placed themselves fully in the same ideological camp as the militant homosexual activists.

If no, then what exactly do they mean? What help – if any – do they offer to struggling homosexuals? Do they believe that homosexuality is a sin or not? And what help do they propose for those who want counsel or deliverance in this area?

Instead of offering us vague motherhood statements about welcoming everyone, many of us would appreciate some real clarity here. And if I and others have misunderstood or mischaracterised the position of Hillsong here, well sorry, but that is not our fault, but Hillsong’s.

In this vitally important area we are in need of precise and clear statements, not PC feel-good bumper sticker responses. We expect politicians to offer us wishy washy statements on homosexuality and other contentious issues. But we expect much better from churches, especially megachurches which are always in the public eye.

Of course I do not mean to pick on Hillsong here, as there are plenty of other churches which seem to think and act the same way when it comes to homosexuality. They are not only all over the place on the issue, but they seem far more worried about pleasing worldlings and being seen to be tolerant and accepting than they are to be seen as being radically and faithfully biblical.

20 Replies to “Chris Pratt, Hillsong, and Help for Homosexuals”