When it comes to God’s intentions for human sexuality, the biblical material is pretty clear. Yet that has not stopped plenty of apostate religious leaders and fake churches from pushing the world’s anti-God agendas. Sadly, so many of them have fully jumped on board the radical homosexual and transgender agendas.

The examples of this are never-ending. Of course here in Australia we have hyper-apostates like Father Rod, pushing every nutty secular left agenda item around, including the devil’s full-scale attack on human sexuality as God intended it. I have penned many articles on this false shepherd, eg: billmuehlenberg.com/2015/03/09/sham-christians-deceived-disciples-and-false-shepherds/ 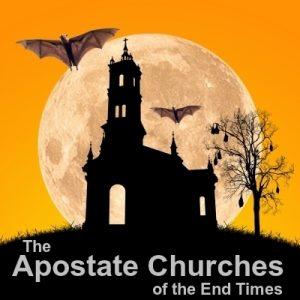 Unfortunately there are many others just like him. And just as they committed themselves 100 per cent to promoting and celebrating the militant homosexual lifestyle, now they are doing just the same with the diabolical and destructive trans agenda.

Reading about each new example of this continues to shock and sicken. All true biblical Christians are grieved and alarmed at this evil being pushed by church leaders, and even taking over entire religious bodies. Here are three more recent examples of this.

My first case comes from the US state of Maine. The headline says it all: “Newly Consecrated Gay Bishop Declares God Is A Woman”. But let me run with a bit more from the article:

Rev. Thomas Brown, who is married to a fellow priest, was ordained as a bishop of the diocese of Maine in the Episcopal Church June 22. Immediately following his ordination, Brown referred to God as a “she” twice in the Nicene Creed. “She is worshipped and glorified. She has spoken through the Prophets,” the just-ordained Bishop Brown said, referring to the Holy Spirit.

The Nicene Creed was written 1,638 years ago and only uses masculine pronouns to refer to God. The microphones in the Cathedral of St. Luke projected the voice of the celebrant, Bishop Curry, for the duration of the creed, barring the line where Bishop Brown used female pronouns for God. It is unclear if the microphones were intentionally switched to project Bishop Brown’s female-gendering of God.
dailycaller.com/2019/06/28/gay-priest-god-woman/

The simple fact that we have a homosexual church leader tells us everything that we need to know. So to launch a full-scale attack on God himself should not be surprising. As to calling God a she, does not this apostate know that a basic principle of leftism is never to assume someone’s gender, but to run with how they self-identify?

The truth is, God throughout Scripture overwhelmingly reveals himself in male terminology, male imagery and the like. But see more on this here: billmuehlenberg.com/2015/10/29/god-and-gender/

My second example is equally horrific – all the more so since young, vulnerable children are deliberately being targeted by these wolves in sheep’s clothing. Consider this shocker of a story:

As “drag queen” story hours continue to sweep the nation at our local libraries, many parents are worried there are no safe places left for their children to be this summer. So when a local church decided to sponsor a summer reading hour, one would think that would be a safe place to go, right?

Typically yes, except this church has completely twisted God’s word into something it’s not, and decided to host their own “drag queen” story hour – and you won’t believe their reasoning. After a local library canceled the “drag queen” story time event, one local liberal church who embraces the LGBT ideology decided to sponsor a room at the local library to preserve the event.

One would expect a pro-LGBT group to pick up the event, not a church that is supposed to honor the word of God.
Except this church is not a typical church and subscribes to a perverse LGBT ideology and is leading countless people astray. The liberal church created a Facebook post inviting parents to the “drag queen” event with the words “Please join us. A drag queen will read children books about how wonderful it is to be unique and special.”

Literally, a church claiming to worship God is telling parents to bring their young children to an event where grown men will dress up in women’s clothing to read to children. This is the epitome of calling what is “evil” something good. Upon looking at their church website, their latest stunt should come as no surprise.
mommyunderground.com/leftist-church-holds-drag-queen-story-hour-to-corrupt-young-children/

The “church” in question is in Texas, and yes, you can see for yourself what they believe in: www.opencathedral.org/about

Um, Jesus was always very clear in what he had to say, and that is certainly the case when he spoke about those who caused little ones to stumble. He actually said that it would be better for them if they were put to death! See Luke 17:1-3 for details.

My final example is just as sickening. The headline is so very troubling: “Trans people invited to mark sex change in Church of England”. The story opens:

The Church of England has issued new advice about how to help transgender people mark their transition.
The guidance recommends the Affirmation of Baptism service is adapted to allow transgender Christians to celebrate their new sexual identity. The service would see them addressed by their chosen name, not birth name.

It follows pressure at the general synod last year to go further in welcoming the transgender community. In the past, the Church has been criticised for not doing enough to guard against transphobia, and for failing to eliminate the bullying of transgender pupils in faith schools.
www.bbc.com/news/uk-46516299

Um, don’t these guys read their Bibles anymore? Scripture is very clear about these matters, and it does NOT affirm people trying to switch their biological birth sex like they do the colour of the socks they put on each morning. Church leaders of all people should know that the homosexual and trans agendas are a direct rebellion against, and defiance of, God’s intentions for mankind regarding human sexuality.

Simply looking at some passages from the book of Genesis should make all this perfectly clear. Consider just two of them:

And those false shepherds who are pushing all this are also fully at odds with the clear teachings of Jesus on this:

Those people in a Christian church – or anywhere else – who are struggling with these matters do NOT need affirmation and promotion. They need help and counsel. Their problems are not physical or biological, but mental and psychological – and spiritual.

Thus they need help to affirm who they really are as made by God, instead of being led down the garden path of lies about basic human sexuality. Churches that contribute to this radical agenda are not helping people but harming them, and driving them further away from their Creator. They will one day face their Judge for doing this.

But these three cases are simply representative of many others. So much of the church has simply given up on God and his Word, and has proudly and willingly bought into the agenda of the world. They have apostasised in other words, becoming Synagogues of Satan instead of churches of the living God.