Every once in a while we have a win for free speech and for religious liberty. Not often mind you, but occasionally. And one of the biggest threats to our freedoms come from the rainbow tyrants. They are seeking to silence all dissent, and are working overtime in their campaign of anti-Christian hatred and bigotry.

Thus when we do win a case like this, it is terrific news indeed, and well worth sharing. One such win has just occurred in the UK. I had written about this story over three years ago. I entitled it, “Your Choice: Homosexual Hegemony or Free Speech”. In it I quoted from a news report: 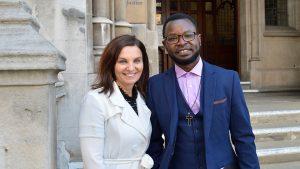 A Christian postgraduate student has been expelled from his course, effectively ending his chances of a career as a social worker, for voicing opposition to gay marriage in a Facebook discussion. Felix Ngole, a 38-year-old father of four, expressed support for Kim Davis, the county clerk from Kentucky in the US who was jailed for refusing to issue marriage licences after the introduction of same-sex unions in September last year. He argued that homosexual activity is against the teaching of the Bible, quoting a verse from Leviticus describing it as an “abomination”.

The post, from his private Facebook account, was part of a discussion thread in which other users voiced their opinions on all sides of the debate. It was not until two months later that he was summoned to a disciplinary hearing at Sheffield University after a fellow student complained about his post. He said he was initially not even told what he was accused of doing. He was eventually told that it involved breaching social work guidelines on “personal conduct” and “bringing the profession into disrepute”.
billmuehlenberg.com/2016/03/01/your-choice-homosexual-hegemony-or-free-speech/

Given a very similar battle here in Australia with rugby player and devout Christian Israel Folau vs Rainbow Big Brother, this is encouraging indeed. After three years of legal battles, Felix Ngole has finally been vindicated. As Christian Concern has said about the ruling:

In a landmark judgment in the case of Felix Ngole, the Court of Appeal has upheld the rights of Christians to freely express their faith and overturned a High Court decision. The crucial outcome represents a major development of the law which results in Christians now having the legal right to express Biblical views on social media or elsewhere without fear for their professional careers.

This is the first Court of Appeal judgment regarding freedom of expression of Biblical views which sets limits on the rights of professional regulators to limit free speech on social media; the judgment will be an authoritative statement of the law which is likely to be relied upon in hundreds of current and future cases.
www.christianconcern.com/our-issues/freedom/felix-ngole-wins-appeal-in-victory-for-christian-freedoms

Felix said this about the victory:

This is great news, not only for me and my family, but for everyone who cares about freedom of speech, especially for those working in or studying for caring professions. As Christians we are called to care for and serve others, and publicly and privately we must be free to express our beliefs, especially when asked, without fear of losing our livelihoods.

I have suffered tremendously as a result of how I was treated by the University of Sheffield and I feel that four years of my life have been taken away from me. Despite all this, I feel overwhelming joy that what I have lost will be so much gain to Christians today and in the future as a result of this important ruling for freedom.

And Andrea Williams, the head of Christian Concern, spoke about the case as follows:

This judgment must send a resounding message to universities and employers across the land. Christians and others should be allowed to express their views. This is what free speech means. No one has freedom not to be offended. We must be able to disagree with tolerance, and not with silencing or bullying. Places of work, and universities in particular, should not be places where certain views are deemed politically incorrect and worthy of expulsion.

This judgment means that we are free to speak, free to express Christian views, to advocate for those views at university, in the classroom, and at work. Christians should use our freedom of speech and unashamedly proclaim Biblical truth, however unpopular or out of fashion it may be. The truth will win out in the end. We hope that this judgment encourages Christians to be bold and fearless in expressing their Christian faith at work, at university, in church or elsewhere. All truth is found in Jesus Christ. In Colossians 1 we are told:

The world needs the truth for in the Truth all things hold together. And it is by the truth we are all set free. Felix is exactly the kind of person that we want in social work. Today he stands vindicated; today justice has been done. But it’s not just for him; it’s for us, the Church here in the UK. Let’s ensure that this emboldens us to speak of the life-giving good news that is found in Jesus Christ.
www.christianconcern.com/our-issues/freedom/a-victory-for-christians-everywhere

This was a major victory – all the more so given the David versus Goliath nature of the battle. The militants had the full backing and support of most of the institutions of power and influence, including a hostile mainstream media and the universities.

But a handful of believers who serve a mighty God have prevailed, against all the odds. Andrea and Christian Concern deserve a lot of credit here. But at the end of the day we know this was a team effort: God’s people working with the God of the universe, helping to overturn an unjust and discriminatory legal decision. One person plus God is always a majority.

We must bear in mind however that for every victory like this, there may well be a hundred decisions that go against Christians. All around the West anti-Christian bigotry is on the rise, and on a daily basis we find believers losing their jobs, being fined, and even jailed, for seeking to resist the pink mafia.

The battles continue, and the war is far from over. But it is nice to get the occasional win. Bless you Felix and keep standing strong.

20 Replies to “A Big Win Against the Rainbow Behemoth”