Why do some Bibles differ in terms of the number of books they include?

Just today I had this comment sent in to my website (obviously by a Catholic): “According to the Bible I read, it has 46 books in the Old Testament, not 39. This is a Protestant error and falsehood regarding the OT canon which should not be promulgated.”

So what was that all about? It has to do with differences concerning what is found in our Bibles. Some 7 to 15 extra books or parts of books can be found in some Bibles. Catholic and Orthodox Bibles will usually have more books than Protestant Bibles today. 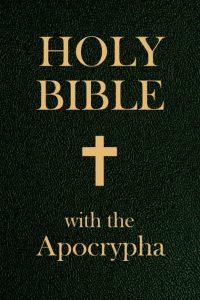 Those who are not fully up on the details of all this, or have an axe to grind (as my commentator above), will make simplistic and reckless claims that Protestants removed books from the Bible. The truth of the matter is quite different, so we need to look at this issue in some detail.

First, let me offer a few broad remarks. An article like this involves trying to put into rather simple terms what are actually some rather quite complex and detailed historical, theological and ecclesiastical matters. So my aim here is to simply offer a popular-level rendition of things, not a PhD thesis.

As to terminology, the Greek term ‘apocrypha’ means ‘hidden’ or ‘hard to understand’. There are various books considered to be apocryphal, and they exist in both Old Testament and New Testament forms. Here I am only focusing on what is known as the OT Apocrypha.

Catholics and Protestants both agree on the 27 books in the New Testament. The main issue of contention has to do with why Catholic Bibles contain some of these other books, while most Protestant Bibles today do not. While the lists can vary, the books or parts of books found between the OT and NT are these:

They were written between around 300 B.C. and A.D. 70. While Protestants call these books apocryphal, Catholics call them deuteronomical (literally, second canon). The Greek word ‘canon’ literally means ‘measuring stick,’ and the term has come to be known as defining which books are actually God’s inspired word.

So what we have is a different understanding by Catholics and Protestants as to what the biblical canon actually is. The question is, why do Protestant Bibles not have these extra books? Let me answer this in part by offering a very brief and very sketchy look at the somewhat complicated historical situation.

The Old Testament comes to us in two main forms: the original Hebrew version and the later Greek version (the Septuagint, or LXX). Simply put, the Hebrew Bible contains what we now know as the 39 books of the OT. They are broken down into some 22-24 books in the Hebrew Bible, because we have split a number of them up. For example, 1&2 Kings was originally one book, and the 12 minor prophets were one book, etc.

But the LXX did contain a number of extra books not found in the Hebrew Bible. As a Jew who knew Hebrew, Jesus relied on the Hebrew Bible, as did the Apostle Paul. But by this time many Jews no longer knew Hebrew, and as later converts came along, especially Greek-speaking gentiles, the LXX came to be used much more often.

Early church fathers such as Origen, Cyril of Alexandria and Athanasius used and preferred the Hebrew Bible. When Jerome was commissioned by the Roman bishop in 382 to produce a Latin version of the Bible (the Vulgate), he followed in this pattern. However, as a result of correspondence back and forth with Augustine, he was persuaded to make use of the LXX instead, thus the addition of the Apocrypha.

But Jerome still felt that these extra books, while of some use for the edification of believers, were not properly to be thought of as being in the biblical canon. He also said that they were not to become the basis of formulating Christian doctrine.

Several regional councils, such as the Third Council of Carthage (397), affirmed this new listing as found in the Vulgate, but not the larger, universally recognised, ecumenical councils. Things basically remained this way until the time of the Reformation. By this point knowledge of the original languages was picking up steam, and manuscript discoveries were helping in the process of Bible translation.

The Reformers emphasised sola scriptura (Scripture alone) and so the question arose, what is the actual canon of Scripture? Luther had reacted to some church doctrines like purgatory and praying for the dead as found in 2 Maccabees 12.

So in part Luther rejected these doctrines by claiming they did not have Scriptural support (that is, support from the shorter Hebrew canon). In this the Reformers were following the lead of Jerome, and they made a distinction between the Old Testament and the Apocrypha.

So the Reformers returned to the earlier church tradition of making use just of the 39 books found in the Hebrew Bible. The Council of Trent (1546) was the official response to the Reformers, including Luther’s criticisms of the canon, and they declared that the books found in the LXX (or around 11 of them at least), were indeed part of Holy Scripture. This is the catalogue of works that they offered:

It was at Trent that for the first time these books were officially declared to be part of the biblical canon. The earlier regional councils were not accepted by all of the church universal, and they did not have the same official authorisation as Trent did. At Trent it was announced that anyone not holding to this listing of the OT books was to be anathema (accursed).

Why Protestants reject the apocryphal books

Protestants have long said that these books may well have much of religious, historical and cultural value. But they usually do not regard them as part of inspired Sacred Scripture for various reasons. These include:

1.They were never in the Jewish canon – that is, in the Hebrew Bible. The LXX came about much later (in the 4th century BC). While some Protestant Bibles before (and after) Trent included the Apocrypha, they were usually placed in a separate section to show they were not of equal authority.

2.They are not quoted by Christ or any of the New Testament writers. They may be alluded to, but not clearly and directly quoted. In contrast, consider the Gospel of Matthew, which has some 130 OT citations and allusions. It should be pointed out that some NT books do refer to pseudepigraphal (‘false writings’) books. For example, Paul quotes pagan philosophers in Acts 17, and Jude 9 refers to the ‘Bodily Assumption of Moses,’ a writing that even Catholics do not consider to be inspired.

4. Some questionable doctrines (at least for Protestants) are taught there, such as almsgiving for salvation (Tobit), and the doctrine of purgatory and prayers and offerings for the dead (2 Maccabees). And some of the books are quite fanciful, such as Bel and the Dragon.

5. No apocryphal book was written by a true prophet or apostle of God. This is in contrast to the authors of the Hebrew canon such as Moses or Isaiah or Jeremiah, or Peter and Paul in the New Testament.

6. No apocryphal book was confirmed by divine miracles, as was often in the case in both the OT and the NT (see for example 1 Kings 18, and Hebrews 1:4).

7. No apocryphal book contains predictive prophecy, which would help to confirm divine inspiration, as found in so many canonical OT books.

8. While some church fathers used them or viewed them as Scripture (eg., Iraneaus, Tertullian, Clement of Alexandra, and Augustine), many did not so readily (Origin, Jerome, Athanasius, Cyril of Jerusalem). And as mentioned, none of the early full church councils favoured them.

9. Also, while some fathers did use the books in preaching and devotions, they usually did not consider them to be fully canonical.

10. From what we now know about the Qumran community and its library of hundreds of books, it seems that they did not regard the Apocrypha as canonical.

In sum, various apocryphal books were given varied degrees of esteem by different figures in the early church, but they usually fell short of canonicity. They certainly contain some historical value, and provide useful information about the intertestamental period.

Thus most important scholarly and critical commentaries by Protestants today will interact with them and offer references to them. But they have never been seen by the entire universal church to be on a par with the divinely inspired 39 books found in the Hebrew canon.

In closing, let me remind my readers of a long-standing practice of mine. Anyone who knows me well and knows my work will realise that I have always said that gung-ho sectarian battles should be taken elsewhere. I have heaps of Catholic friends and colleagues, and I prefer not to let Cath-Prot warfare take place here.

In this piece I simply offer some reasons why Protestants have had issues with the OT Apocrypha. This piece is mostly for those who ask me why this is. I am not forcing anyone to agree with me. And I do not want yet another major war to break out here.

So I don’t need angry Catholics coming here trying to ‘set me straight’. Nor do I need angry Protestants coming here seeking to tell me why we should have nothing to do with Catholics. Those who want to engage in such polemics will find plenty of other places where they can do this to their heart’s content. Thanks for understanding.

18 Replies to “On the Apocryphal Books”