Sounding the alarm and asking questions during a time of crisis is crucial:

Before proceeding, for the umpteenth time, let me share a few basic truths. Yes, corona is real and dangerous. But statist overreactions, overzealous policing, mass lockdowns and shutdowns, and the destruction of economies are also real and dangerous. As always, trying to get the right balance here is critical.

Since it seems that there may be far more sheeple out there than those who dare to try to think critically, ask hard questions, and seek the truth, I for one will keep posting articles like this. Do I have all the truth? Of course not. But the only way we can get to the truth is to not accept everything the state tells us, to learn how to ask probing questions, and to learn how to do some independent thinking. 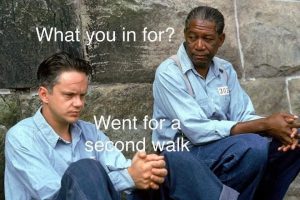 So let me offer what has now become my daily list of outrageous corona crisis crackdowns and overkill. To do this is NOT to say that all governments are evil, and all this is one giant conspiracy. It is simply to say that freedom matters, and eternal vigilance is a prerequisite for liberty. Here then are a few more recent cases of corona madness.

Here in Australia we have one of the larger revenue-raising exercises happening. States are getting heaps of money as they fine their citizens, often for the most ludicrous things. Consider this: “Queensland police have issued more than 400 fines for coronavirus-related transgressions, raking in more than half a million dollars for the state government.” 7news.com.au/lifestyle/health-wellbeing/half-a-million-dollars-worth-of-covid-19-fines-issued-in-queensland-c-970780

A UK story is pretty shocking: “A police officer has been filmed telling a dad that he’s not allowed to play with his children in his own front garden. The South Yorkshire Police officer approached Daniel Connell as he played with his two very young children in his front garden in Rotherham Eastwood village. Mr Connell filmed the incident and posted it on social media.” www.lbc.co.uk/news/police-under-fire-for-telling-dad-front-garden/

Let me turn to America for a few more examples. Check this out from Boston:

“A Boston suburb has set up one-way sidewalks in order to have residents practice social distancing amid the coronavirus pandemic. Police in Beverly, in the north of the city, have mandated that locals who are walking in opposite directions along bustling Lothrop Street must now use separate sidewalks so that they are not brushing up against one another. Pedestrians must now walk against traffic and failure to comply with the new directive could result in a $100 fine.” www.dailymail.co.uk/news/article-8207015/Boston-suburb-sets-one-way-sidewalks-fine-walk-wrong-direction.html

Crackdowns on churches of course have been in the news. Here are several more examples of this: “Andy Beshear, the Democratic governor of Kentucky, just announced that anyone in his state who is caught attending a ‘mass gathering’ over Easter will have their license plate number recorded by state police and will be forced into a two-week self-quarantine.” thepoliticalinsider.com/dem-governor-of-kentucky-announces-state-will-record-license-plates-of-easter-churchgoers-enforce-14-day-quarantines/

And check out this headline concerning a church in Virginia: “Police Fine Church $2,500 for Holding Service With 16 People, But Abortion Clinics Can Kill Babies.” www.lifenews.com/2020/04/09/police-fine-church-2500-for-holding-service-with-16-people-but-abortion-clinics-can-kill-babies/

There has been so much of this occurring of late. One satirical meme making the rounds shows a picture of a church with a large banner hanging from it with the words “Planned Parenthood”. Yep, while churches all over America are being forced to close down by various state governments, abortion mills are still allowed to do business as usual.

Here is one final case which really is a shocker. I wonder how anyone who is so keen to defend the state in all things during this crisis can defend something like this! A recent order by Michigan Governor Gretchen Whitmer, a Democrat, has alarmed plenty of people:

An extended “stay at home” order by Governor Gretchen Whitmer bans selling fruit and vegetable plants. Workers at greenhouses and nurseries say that makes no sense. The governor wants people to restrict their trips from home to getting the essentials such as fuel and food. Retail garden centers have been ordered to close temporarily. Callie Gafner works at a small garden center. She says banning fruit and vegetable plants does not help limit the spread of COVID-19.

“If you’re growing them yourself, you’re reducing the contact between people because you’re not going anywhere. You’re going out in your own garden and picking them up rather than going into the store and coming into contact with how many people?” Gafner explained. . . . Farmers markets are also barred from selling seedlings for fruits and vegetables. www.michiganradio.org/post/fruit-and-vegetable-plants-nonessential-under-governors-order

Really? Not even seeds for your own home garden!? I am not a conspiracy theorist, but if I get many more of these crapola cases of Big Brother madness, I might be tempted to become one! If stuff like this does not convince you that things are getting WAY out of hand, nothing will! No wonder American political columnist Benny Johnson tweeted this recently:

During this crisis people have been arrested for:
-Going to church
-Playing with their own kids
-Being in their own yard
-Paddle boarding
-Not wearing a mask
-Jogging on a beach
Perhaps the biggest victory for China during China Virus has been the world turning into China

Hey, I am starting to get a bit paranoid here! A few weeks ago when I went out to the shops, I thought I was doing well if I returned with some toilet paper. Now I think I am doing well if I return and I was not arrested for something! (Yes I am being a bit satirical here – but only a bit!)

Let me close by responding to a few of my many critics. Ever since I have tried to sound the alarm and raise awareness of what is happening with the corona crisis, I have had all sorts of folks attacking me and accusing me of various things. One typical num num retort so often heard is this: “You just want people to die”. Um, yeah right.

Indeed, for daring to raise some hard questions during this period, I have been called all sorts of things. One person even suggested it was dangerous of me to be raising these concerns and worrying about how sheeplike so many folks seem to be. Well, I guess I can wear that. The prophets, Jesus and the disciples were all thought to be dangerous as well.

One of the more loony things I had one Christian tell me was this: “Don’t forget, personal freedom is also an idol.” Oh good grief – one might as well foolishly try to argue that it is idolatrous to try to defend your wife when she is being attacked. Can your wife become an idol if you put her before God? Sure, but I am also called to love my wife, and that includes protecting her when necessary.

No, personal freedom is NOT an idol. However, can it become an idol? Absolutely, as with most everything. But it is NOT idolatrous to keep sounding the alarm and championing liberty while we still have it. Unlike too many folks, I am not going to be cavalier and blasé about growing statism, the abuse of government power, and the loss of liberty.

Let me say once more what I have been saying all along, since so many of my critics just don’t seem to get it:

-Yes, there is a place for some government intervention during periods of emergency, and yes some temporary limitations on freedom may be needed while in these times of crisis.

-If folks really think we should just say and do nothing until all this is over, it will be far too late by then. The only warning worth its salt is one that is done before it is too late – not after. To urge us all to be silent, compliant sheep during this time is the height of irresponsibility. It certainly is not the marching orders of the Christian who knows that unchecked statism must always be guarded against.

-And I guess I need to say it again: Australia has 25 million people. How many have died from corona so far?

-I am simply asking questions in these posts – questions every single Christian and defender of freedom should be asking.

-If we really believe that the state can do no wrong in times like this, then yes, we might indeed be part of the problem!

-And no, it is not treasonous, unbiblical, disrespectful, reckless, or dangerous to be asking questions, highlighting concerns, and encouraging people to think for themselves and not just be docile sheep during such a time as this.

-Yes, we must pray for our leaders that they will have the wisdom of Solomon here. Pray that they make wise, balanced and fair decisions that are in the best interests of the people.

19 Replies to “The Latest Cases of Covidiocy”