When we stop asking questions of the State we surrender our freedoms:

During times of crisis, many people will become overwhelmed by fear, will succumb to panic, and will all-too readily submit to whatever it is that the State demands of them. History is replete with examples of this. And we are certainly seeing it happen once again during the corona crisis.

As I have been documenting for quite some time now, far too many governments along with plenty of corona alarmists have been resorting to what can only be called police state tactics to get an often-unwilling public to go along with various lockdown and shutdown measures. 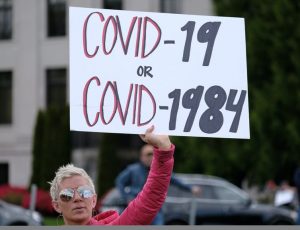 Encouraging people to snitch on their neighbours for daring to not succumb to panic-mongering and fear is one obvious way in which a democracy descends into fascism. So too is public shaming. When people have all sorts of good reasons to be hesitant to run with the hysteria and with the draconian measures, the State and the alarmists seek to shame them into submission.

All this is the stuff of Big Brother Statism. We saw/see it routinely and regularly practiced in places like the Soviet Union, Communist Eastern Europe, North Korea, and Communist China. The State is great at co-opting people because of fear and so on to actually end up turning on their own neighbours in the interests of the ‘public good’. Famous cases also included children turning their own parents in to the State.

Thankfully we are not that bad with corona – thus far. But there is always the risk of a slippery slope here. Today we have governments encouraging people to snitch on others, tomorrow they may be demanding such actions. All in the name of ‘saving lives’ of course. At the very least, we must keep asking hard questions here.

Case in point: the other day Australian Prime Minister Scott Morrison came out with yet another rather vague and open-ended discussion about possibly easing some of the harsh restrictions in place. Again, it was all about ‘maybe this, at some point that, we may consider this, we might relax some things…’ Um, such tenuous and open-ended ‘promises’ are not very reassuring.

And even worse was when he said that an “early mark” to ease Covid-19 restrictions next week will depend on the uptake of the tracing app: “Of those that remain outstanding, there was one that Australians can do something about, and that is downloading the COVIDSafe app. This is a critical issue for National Cabinet when it comes to making decisions next Friday about how restrictions can be eased.”

Hmm, once again, it was so very kind and gracious of the government to tell us they MIGHT at some point give us a few freedoms back. Specifically, ScoMo is telling us we can have some freedoms back if we download the app. As such, it is perfectly clear that we are NOT talking about freedom of choice here. We are NOT talking about a voluntary take up. Instead, we are talking blackmail: do what we say, or else!

And Health Minister Greg Hunt was even more blunt in this obvious case of brutish blackmail: “Want to go to the footy? Download the app.” Good grief. If he gets a heap of flak for this – as he should – and comes back claiming he was just kidding, I will say this: ‘Its not funny Hunt.’

This is how every dictator in the world operates: take away rights from the people, such as the right of assembly, relabel them as privileges, and then say that some might be given back IF folks do whatever the State demands of them. But I have already written about some major concerns with these sort of apps. See here for example: billmuehlenberg.com/2020/04/27/on-corona-tracking-apps/

But there are plenty of experts out there who are also very concerned about apps like this, and the dangers they can pose to all of us. Consider this new article, “Australia’s COVIDSafe App needs more legal protections and transparency to gain trust” by Graham Greenleaf and Katharine Kemp. It is a very revealing piece indeed and is well worth quoting from. They begin:

The COVIDSafe App launched by the federal government to assist in contact tracing during the pandemic has been downloaded by over 3 million Australians since it was released on a Sunday less than a week ago. However, this is less than a third of the users experts claim would be necessary for digital contact tracing to be effective. To win the trust of those who are undecided, the scheme will need to be amended. The app was released alongside a Determination by the federal Health Minister under the Biosecurity Act, intended to put in place privacy protections necessary to secure public confidence and downloads.

While the Determination contains a number of worthwhile protections, the launch creates three reasons this public confidence is not yet warranted: misleading initial statements by the government about the operation of the app; insufficient transparency; and flaws in the protections in the Determination. These may be remediable. This article summarises the steps Australian governments need to take if public trust is to be justified.

They look in some detail at these matters and conclude as follows:

In some respects, we are ‘all in this together’, but in other respects each person’s individual circumstances are unique, due to a combination of factors such as age, work, underlying conditions, family composition and living arrangements, whether in self-isolation or back at work every day in essential services, and even ownership of the right type of phone.

Individuals will also make different assessments of the extent to which their actions may or may not contribute to the public good, and the need to protect themselves or those close to them. Many in the media and government, as well as high-profile figures in business and tech, have openly exerted moral pressure in favour of using the app, even shaming those who don’t, characterising them as putting trivial privacy concerns ahead of the interests of the nation.

A more balanced approach is required, one that recognises there should be no requirement for Australians to give up more privacy than is necessary and proportionate, and that the need for privacy has even greater immediacy for some, including journalists; victims of stalking and domestic violence; and those out of favour with state powers at home or abroad.

Decisions about whether to install and run this app remain individual decisions, but are best made after obtaining as much information as can reasonably be obtained and put in the balance. This does not require a choice between health and privacy. With the right rules and design, the government can support both. newsroom.unsw.edu.au/news/business-law/australias-covidsafe-app-needs-more-legal-protections-and-transparency-gain-trust

Also, this interview with Katharine Kemp about broader privacy concerns is worth listening to: podcasts.apple.com/au/podcast/010-katharine-kemp-what-is-big-tech-doing-with-all-your-data/id1477300507

Of course there are far more issues that can be raised here than just this particular Australian government app. I have documented all sorts of concerns over the past few months. And plenty more keep arising each day. Indeed, if this does not utterly shock and alarm you, you need to check your pulse:

“Kansas City, Missouri, officials are now requiring every church to submit a list of members and attendees along with their names, addresses and telephone numbers to city officials for tracking and surveillance purposes.” lc.org/newsroom/details/20200501churchgoers-must-register-with-the-government-in-kansas-city

And all of this because of incredibly wrong assumptions, guestimates and modelling by our “experts”. I have also been trying to bring some perspective on corona by comparing it with past epidemics. While all such outbreaks will have their differences, the point is simply this: we have had many deadly outbreaks in the past, but usually with none of the State overreaction we are having with corona. Let me quote from just one recent piece on this:

In my lifetime, there was another deadly flu epidemic in the United States. The flu spread from Hong Kong to the United States, arriving December 1968 and peaking a year later. It ultimately killed 100,000 people in the U.S., mostly over the age of 65, and one million worldwide.

Lifespan in the US in those days was 70 whereas it is 78 today. Population was 200 million as compared with 328 million today. If it would be possible to extrapolate the death data based on population and demographics, we might be looking at a quarter million deaths today from this virus. So in terms of lethality, it was as deadly and scary as COVID-19 if not more so, though we shall have to wait to see.

“In 1968,” says Nathaniel L. Moir in National Interest, “the H3N2 pandemic killed more individuals in the U.S. than the combined total number of American fatalities during both the Vietnam and Korean Wars.” And this happened in the lifetimes of every American over 52 years of age.

I was 5 years old and have no memory of this at all. My mother vaguely remembers being careful and washing surfaces, and encouraging her mom and dad to be careful. Otherwise, it’s mostly forgotten today. Why is that? Nothing closed. Schools stayed open. All businesses did too. You could go to the movies. You could go to bars and restaurants. John Fund has a friend who reports having attended a Grateful Dead concert. In fact, people have no memory or awareness that the famous Woodstock concert of August 1969 actually occurred during a deadly American flu pandemic that only peaked six months later.

Stock markets didn’t crash. Congress passed no legislation. The Federal Reserve did nothing. Not a single governor acted to enforce social distancing, curve flattening (even though hundreds of thousands of people were hospitalized), or banning of crowds. No mothers were arrested for taking their kids to other homes. No surfers were arrested. No daycares were shut even though there were more infant deaths with this virus than the one we are experiencing now. There were no suicides, no unemployment, no drug overdoses. Media covered the pandemic but it never became a big issue. www.aier.org/article/woodstock-occurred-in-the-middle-of-a-pandemic/

Let me conclude by saying what I have said so often now: yes we must all take sensible precautions; yes there is a place for some government intervention in all this; yes some freedoms may need to be carefully and temporarily limited.