The V-E Day celebrations of 75 years ago have nothing on the celebrations Christians will have when Christ returns:

Exactly 75 years ago much of the world was celebrating the defeat of the Nazis and victory in Europe. After six long years of war that would eventually cost around 75-80 million lives (Japan did not surrender until some months later), a war-weary world erupted in mass celebrations. 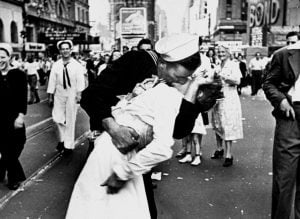 While many of us are getting cabin fever with corona lockdown measures, we have only had to endure this for two or three months now. And except for the power-hungry leader of Victoria keeping that state under draconian lockdown measures, much of the rest of the country is now slowly easing the restrictions.

So the celebrations were of course much greater 75 years ago than anything that will be seen as the corona crisis continues to abate and freedoms are returned. The famous pictures from Times Square in New York City are just some of the many memorable images from that incredible day.

To put all this in some chronological perspective, let me offer this:

Let me speak further to some of the celebrations that occurred exactly three-quarters of a century ago. One article says this about how the UK reacted to the good news:

As news of the official surrender spread on May 7, relieved and exhausted citizens poured into the streets of London to welcome the war’s end and the defeat of Nazi Germany. Tens of thousands crowded Central London, cheering and partying until midnight, when a thunderstorm ended the celebrations for the night.

Though British Prime Minister Winston Churchill and King George VI wanted May 7 to be celebrated as V-E Day, they acquiesced to their American allies and declared an official celebration on May 8. Street parties took place across Britain, as neighbors shared food that was still being rationed, and crowds gathered in London’s Trafalgar Square to hear Churchill’s radio broadcast from 10 Downing Street piped through giant speakers.

“We may allow ourselves a brief period of rejoicing,” Churchill said, “but let us not forget for a moment the toil and efforts that lie ahead. Japan with all her treachery and greed, remains unsubdued. We must now devote all our strength and resources to the completion of our task, both at home and abroad. Advance Britannia.”

Churchill later appeared before cheering crowds on the balcony of Buckingham Palace with King George VI and Queen Elizabeth, along with the Princesses Elizabeth (the future Queen Elizabeth II) and Margaret, who had been allowed to wander incognito among the crowds to experience the celebrations for themselves. That night, Buckingham Palace was lit by floodlights for the first time since 1939, and a giant V of light was projected above St. Paul’s Cathedral, ending the darkness that had blanketed London, and the rest of Britain, for nearly six years. www.history.com/news/v-e-day-around-the-world

Another recent piece speaks to the celebrations that took place in New York:

In Manhattan, the impending surrender led to widespread celebrations. People working in high-rises threw homemade confetti from windows, disappointing the city’s sanitation commissioner, who rued the loss of more than 1,000 tons of the “vital war-commodity” that his crews had to clean off the streets, according to The Times.

On May 8, Times Square filled with hundreds of thousands of revelers — though the party was curtailed a bit by rain that began falling at noon. (Bars and grills did “a rushing business” all day.) The brownout of nighttime lights that lasted throughout the war ended across America, with the lights of Broadway shining once again and the Statue of Liberty bathed in light after sunset. www.nytimes.com/interactive/2020/05/07/magazine/ve-day-anniversary.htm

As I reflected on those glorious days of exultation and celebration that took place on 1945, my mind turned to an even greater celebration that will take place one day. At some point all the suffering and heartache and misery and sin and death of this world will come to an end as Jesus returns to claim his rightful rule and reign over planet earth.

The contrast will not be greater. One of the most frequent prayers I utter on a regular basis of late is quite short and to the point: “Come quickly Lord Jesus”. I don’t know about you, but I routinely groan in my spirit and cry out to God as I see overwhelming darkness everywhere, horrific evil all around, terrible suffering and unceasing sin everywhere. It breaks my heart and tires me out.  I want out.

As I wrote four years ago: “But it seems to me that anyone who deeply loves the Lord Jesus Christ and is seeking to be conformed to his image will increasingly feel utterly out of place in this world. They will be heartsick over what they see happening all around them – even in the churches.” billmuehlenberg.com/2016/05/22/come-quickly-lord-jesus/

Yes I know, until the Lord returns I have a job to do. So I will indeed ‘occupy till he comes’. But the one thing I long for more than anything else is to see all these dark days come to an end, and to see Christ set up his glorious rule of true peace, justice and righteousness.

The Bible speaks in various ways about the coming of the Lord. Yes, much of that has to do with judgment and the wrath of God being poured out on all those who continue to shake their fists in defiance against the Living God. But we get some inklings of incredible celebrations and times of worship in the book of Revelation. As but one example, we read this in Rev. 19:1-10:

After this, I heard what sounded like a vast crowd in heaven shouting,

“Praise the Lord!
Salvation and glory and power belong to our God.
His judgments are true and just.
He has punished the great prostitute
who corrupted the earth with her immorality.
He has avenged the murder of his servants.”

And again their voices rang out:

“Praise the Lord!
The smoke from that city ascends forever and ever!”

Then the twenty-four elders and the four living beings fell down and worshiped God, who was sitting on the throne. They cried out, “Amen! Praise the Lord!”

And from the throne came a voice that said,

“Praise our God,
all his servants,
all who fear him,
from the least to the greatest.”

Then I heard again what sounded like the shout of a vast crowd or the roar of mighty ocean waves or the crash of loud thunder:

“Praise the Lord!
For the Lord our God, the Almighty, reigns.
Let us be glad and rejoice,
and let us give honor to him.
For the time has come for the wedding feast of the Lamb,
and his bride has prepared herself.
She has been given the finest of pure white linen to wear.”
For the fine linen represents the good deeds of God’s holy people.

And the angel said to me, “Write this: Blessed are those who are invited to the wedding feast of the Lamb.” And he added, “These are true words that come from God.”

Then I fell down at his feet to worship him, but he said, “No, don’t worship me. I am a servant of God, just like you and your brothers and sisters who testify about their faith in Jesus. Worship only God. For the essence of prophecy is to give a clear witness for Jesus.”

We can only imagine what those times of praise and worship will be like. But it is such a tremendous hope that all true Christians have. Do you love the Lord’s appearing? Do you long for that day? Is his return your blessed hope? Well hang in there. Soon enough it will happen, and the celebrations of 75 years ago will pale in comparison.