It is amazing what a bit of fear can do in a time of crisis:

If you wanted to conduct a grand social experiment to see how easily the masses can be controlled by means of fear, you do not need to look very far. While history is replete with examples of this, one simply needs to look at the opening months of the year 2020. Fear of a virus has led to the most frightful of outcomes. Everywhere we see Statism on steroids. 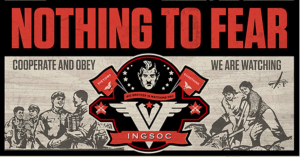 And there are two sides to this coin. The lust for ever more power and control is too strong a temptation for most leaders. So many of them have utterly relished this corona crisis to become little tinpot dictators. And they know that keeping the masses in fear is a terrific way to grow even further in power.

But the people are also at fault here. They are far too easily turned into brainless sheeple doing their masters’ every bidding. When you live in fear and anxiety and uncertainty, you are far too willing to do whatever the powers that be want of you.

This has been the clear lesson of history. All of our recent tyrants – be they Stalin or Hitler or Mao or Kim Jong-un – have maintained total control over the masses by keeping them in a steady state of fear. Let me draw upon several articles here, and then speak to this further. One piece from a legal site says this:

Thomas Jefferson is reported to have said: “When government fears the people, there is liberty. When the people fear the government, there is tyranny.” I have investigated and prosecuted dictators and their henchmen for most of my professional life. I have studied their lives, personalities, their rise to power and how they governed once achieving that power. The one common theme in their theories of governance is fear. It is easier to govern and dictate to citizens through fear.

As Hannah Arendt wrote in her book, The Origins of Totalitarianism: “A fundamental difference between modern dictatorships and all other tyrannies of the past is that terror is no longer used as a means to exterminate and frighten opponents, but as an instrument to rule masses of people who are perfectly obedient.” The infamous dictators of the twentieth century, such as Stalin, Hitler, and Mao Tse-tung among others, understood this all too well. Their theory was that a frightened populace will allow their government to take drastic measures to protect them without protest, usually from perceived evil that threatens their society or country externally. www.jurist.org/commentary/2019/01/fear-a-dictators-tool/

Hmm, sound familiar? Another article says this in part:

Ruling classes for thousands of years have understood the power of intentionally invoking fear in their subjects as a means of social control. . . . The artificial construction and maintenance of fear in a population by a ruling class has remained pervasive from the time of Ancient Egypt up until the modern day. Oppressive governments often maintain their grip on a nation by continually invoking fear, and then proceeding to claim that only they, the ruling powers, have the means and ability to protect the population from such a threat: “The whole aim of practical politics”, wrote HL Mencken, “is to keep the populace alarmed (and hence clamorous to be led to safety) by menacing it with an endless series of hobgoblins, most of them imaginary.” academyofideas.com/2015/11/fear-and-social-control/

Quite so. Consider the issue of snitching on one’s neighbours – or even family members. This happened routinely in both Nazi Germany and in Communist countries last century. There would have been both a carrot and a stick approach here. Fear drove many people to do this, and also, they may have received a little benefit as well – perhaps an extra ration of some scarce food item from the authorities.

Indeed, I recently read a book about Irena Sendler, the Polish Catholic who saved so many Jewish children during WWII. Besides all the obvious dangers she faced from the Nazis, she also had to deal with informants and snitchers. There were fellow Poles – and even some Jews – who were happy to turn on their own people in exchange from some favours and privileges from the Nazi authorities.

Many folks today glibly think that they never would have been so callous and would not have betrayed a friend or neighbour if they were living in Nazi Germany or Soviet Russia or Communist Eastern Europe. But not so fast: if they are quite happy today to report a neighbour for some “social distancing” violation, they are already in the exact same boat.

They are living in fear – if not of the heavy hand of the State, then of the fear of contracting some disease. Self-preservation is a strong instinct, and when coupled with fear, it can result in normally “good” people doing all sorts of things – even evil things.

One simply has to speak out in public about these matters and question the alarmism, fear-mongering, State overreach, and overzealous policing to experience this firsthand. You will get all sorts of corona alarmists who clearly are running on fear attack you and condemn you.

If you dare to question the official narrative, and if you dare to think for yourself, and ask real questions of our “experts” and our leaders, you will get hordes of folks hating on you. I have had this happening to me for over two months now.

And when your life is controlled by fear and you are focussed on only yourself and your own personal safety and security, then facts, evidence and reason are thrown to the wind. As but one example, I have mentioned before how early on one Australian academic was debating me on the social media about the corona numbers. He told me (presumably with a straight face) that it was fully likely that a million Australians would die from corona!

Yes he actually said that! Um, this guy was only off by a mere 999,903 deaths?! Yet there he was, attacking me and pontificating as if he were some sort of expert here, and I was just some sort of fool. His emotive panic and fear had caused his mind to turn to mush.

Of course even with something like corona so much of it can come down to politics as well. It is simply a fact that both here and overseas those leaders (be they presidents or prime ministers or governors or premiers or mayors, etc) who have been the most draconian in terms of lockdowns and the most resistant to letting people have more freedoms as the curve becomes well and truly flattened have tended to be those on the leftist side of politics.

Not always, but mostly. And those who have either been the least restrictive in terms of lockdowns, or the quickest to ease restrictions, open things up, and get things moving again, have tended to be those on the conservative side of politics. This becomes quite clear if you simply dare to go to the pages of the various leaders and discuss these things.

I have one friend who is a corona realist as opposed to being a corona alarmist, and he seeks to bring a bit of sanity and sense into the debate. For example, he will go to the social media page of Australia’s most hardcore and restrictive alarmist, Dan Andrews, and try to share some facts there.

He gets absolutely hammered by enraged Andrews’ supporters – not by anyone returning with facts and evidence, but by those who are clearly died-in-the-wool Labor Party supporters. They will fight to the death defending Chairman Andrews no matter what he says or does, and they will bitterly lash out at anyone who dares to offer a different point of view.

Yes, they too would be running with fear, but couple that with blind devotion to a political party or ideology, and you have a recipe for disaster. It is always that way when you put ideology ahead of reality. Many Germans lived in fear, but many of them also fully supported Hitler and thought he could do no wrong.

Related to this, fear of the unknown or fear of getting some disease or fear of dying also becomes a major way in which we lose our ability to think straight and end up running on emotions. As I have written before, life is always risky. If I step outside a tree might fall on me and kill me.

Indeed, with lots of rain and winds of late, I have noticed plenty of trees coming down. Life is always about trade-offs and about risk-taking. If I want to never get hit by a falling tree, my options are pretty easy: simply never step outside. The same with fear of dying in a car crash. If you are really worried about that, no probs: simply refuse to drive, or go with anyone who does.

We all weigh up pros and cons of any given action. We are all in effect actuaries, dealing with risk assessment and management. We decide all the time if this or that course of action is worth it, is safe, is worth taking risks over. Some folks never go outside without wearing a face mask, even when there is no virus crisis occurring. Some folks never fly in a plane, for fear of it crashing.

It is one thing to refrain from doing certain things if you prefer. It is quite another to demand that everyone else be as paranoid and full of panic as you are. But as I keep saying, a crisis or emergency is the ideal vehicle for the State to get further control and power. Keeping the masses in a state of fear is just too easy.

And as we have seen over the past few months, it works like a charm. I and others have often said that if this whole crisis was a dry run or a test run for some real deal government clampdown in the future, well, it has worked perfectly. The amazing speed and ease in which rulers have shut down entire nations all over the planet, and the amazing speed and ease in which the masses have meekly and readily fully submitted has been a real shocker.

If we wondered how it was that so many Germans so willingly and with such servile submission bowed down to their Nazi overlords, I think we are starting to learn the answers here. And it sure does not look pretty.

18 Replies to “Fear, Fascism and Fealty”