So kind of our glorious leader to give us a handful of freedoms!

OK, in just a matter of minutes the Victorian Premier Dan Andrews will be announcing the possibility of relaxing a handful of restrictions, at some time in the future. Given that he has had the most draconian and over the top lockdown measures in place, I am not expecting very much to be forthcoming.

Indeed, he has constantly been shifting the goalposts here with his corona alarmism. First it was just to flatten the curve, but then he kept making up new milestones that had to be met. I sort of expect him to say today that no restrictions will be lifted in Victoria until we can guarantee that all citizens will live to be 100. 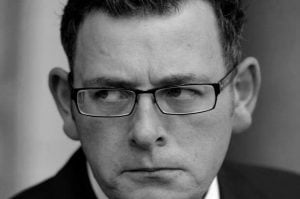 With this sense of pessimism as to what he might offer us mere peasants today, I have put together a little list of the sorts of “kind and gracious” allowances he may confer on us hoi polloi. Of course what is found in this list may be wildly optimistic. He may in fact announce that he is never lifting any restrictions.

After all, it is very hard for any ruler to readily relinquish power and control. The more they get the more they want. This is one of the clearest lessons of history. And we must remember, such complete control of all things is always for our own good of course.

So this is what I am expecting our beloved Premier (often known as Dictator Dan) to be saying real soon:

-Two weeks from now I will allow you to check your mail box (although from henceforth mail deliveries will only be allowed once a week).

-From next month you will be allowed to brush your teeth once a month,

-In November your ration of spam will be increased from 1 to 2.

-In December I will magnanimously allow you to take a bath.

-Next January you will kindly be allowed to take a 10-minute drive in the countryside.

-Next February we will allow you to go fishing – but only for 3 minutes per month.

-In April you might be allowed to brush your teeth twice a month – but only if the curve is flattened.

-In 2022 we MAY open the first bookstore – but you will only be allowed to buy one book per year.

-In 2023 there is a slight chance you can have the freedom to question your overlords – but only a little bit.

-In 2024 you will graciously be allowed to take a 15-minute drive in the country.

-In 2025 all toilet paper will be replaced with pinecones. Only one per customer will be allowed each month however.

-In 2028 we might – if all you sheep have fully obeyed our orders – allow a state election. But only one party will be allowed to field a candidate.

-In 2029 all elections will be cancelled and I will be declared dictator for life.

-In 2030 one member of your family each month will be allowed to visit a loved one in our glorious sister state, North Korea.

-In 2032 a grand total of three churches will be allowed to reopen. But they all must contain the officially sanctioned Andrews Hymnal, and only have four people inside per day.

-In 2033 an 80-foot statue of Chairman Dan “Mao” Andrews will be erected. All must worship it for 12 hours daily – all recalcitrants will be shot on the spot.

Remember little sheeple, all this is for your own good. After all, if it saves just one life!! Have a nice day!

Well, the benevolent leader has just concluded his press conference, and actually my list is pretty close to what he said! OK, not quite, but we all need a little dose of humour now and then during these hard times. And of course I was raising some serious points along the way with my attempt at levity.

The federal government under Scott Morrison has rightly been urging us for some weeks now to return to a sensible resumption of life, with children back in schools and businesses reopened. But a few Premiers like Andrews have been dragging their feet and relishing their newfound powers over the masses,

As I said, we learn from history how so very easily power corrupts, and how it is so hard for rulers to give up power and control. And the most important point here which so many folks do not get is this: our leaders are meant to be serving US.

Moreover, when and where have these leaders been given such sweeping powers to completely strip us of most of our liberties and freedoms? And it is a real worry when they “graciously” decide to give a few of them back – IF we do their every bidding. I did not think democracies were supposed to work that way.

Since the very beginning of this crisis I have been warning about how emergencies can bring out both the best and the worst in governments. If managed carefully and in a balanced fashion, we all can survive a crisis like corona. But if we allow reckless and unsubstantiated doomsday predictions and fearmongering to dominate, we can quickly swing way out of balance.

I had no need to wait in making such warnings way back then, because I was quite aware about the lessons of history. And sadly my fears were confirmed, not just here, but overseas as well. In far too many jurisdictions the cure did indeed end up being far worse than the disease.

A piece recently penned by Brendan O’Neill is worth quoting from here as I finish this article. I find myself in full agreement with his title and subtitle: “Lockdown fanatics scare me far more than Covid-19 – Their extremism is a menace to liberty and livelihoods. They must be stopped.” He begins this way:

I know I’m meant to be scared of Covid-19. But I’m far more fearful of the lockdown fanatics. These people who are so blase about the halting of economic life, and who bristle at any suggestion that the lockdown should be eased, pose a graver threat to the future of the UK than coronavirus does. They are a menace to liberty, reason and people’s livelihoods. Our society is taking steps to tackle Covid – now we need a huge collective effort to face down lockdown fanaticism.

The lockdown fanatics were out in force yesterday. No sooner had there been hints from Downing St that the lockdown might be mildly eased than they had taken to their computers and media platforms to condemn such reckless talk of restoring a small amount of everyday liberty. #KeepTheLockdown trended on Twitter. Labour Party people insisted the lockdown must stay. Labour has effortlessly moved from being the party that wanted to keep us in the EU against the will of the largest democratic vote in history to being the party that wants to keep us all in our homes despite expert predictions of the largest economic contraction on record if we don’t get back to work.

Piers Morgan burst yet another blood vessel, fretting that people might go outside to enjoy the sunny bank holiday weather. The horror. Meanwhile, the TUC has spent the past week insisting that it is unsafe to allow working people to go back to their jobs. Yes, we now live in a country where a Tory government wants people to have the right to return to work and the TUC wants us not to. It doesn’t get more surreal than this.

And of course social media was awash with lockdown-loving leftists and millennial media types, at home making their sourdough bread and watching Normal People, fuming against any suggestion that the government’s cute experiment in dystopian welfarist living should be ended anytime soon. These people who can work from home – doing their public-sector stuff or making their ironic podcasts – insist that anyone who calls for a return to work is elevating the economy over lives. As if the economy isn’t lives, too. As if work, production and creating the wealth that funds health, schools and housing isn’t also about life.

It is testament to how distant the publicly employed or knowledge-economy middle classes have become from the sphere of production, from meaningful and useful economic life, that they can brush aside ‘the economy’ as a mere abstract phenomenon as they pop their latest Instagrammable attempt at banana bread, full of ingredients made, transported and sold by ‘the economy’, into the oven.

Britain is on the brink of the worst recession since the Great Frost of 1709, according to the Bank of England. Others are predicting an utterly unprecedented 13 per cent contraction in national output. Millions will lose their jobs. And that’s just the UK. More than 100 million Indians have lost their jobs as a result of the global contagion of lockdown. Many will be plunged into hunger, and worse. The International Labor Organization says 1.5 billion people around the world are at risk of losing their livelihoods. The halting of economic life and production and transportation could lead to a global ‘hunger catastrophe’, says the UN. I hope the lockdown fanatics think about that next time they post a pic of their latest loaf of sourdough.

But they don’t think about it. Not seriously. They treat it as incidental. The economic devastation being wrought in the US, the UK and elsewhere gets a few column inches here and there or is an afterthought in the nightly news. But it is rarely the story. Lockdown fanatics are so convinced of their moral rectitude, so bound up in anti-Covid zealotry, so enjoying their part in the culture of fear and the culture of condemnation against anyone who breaks lockdown, that they just zone out the terrible things that they are helping to bring about.

Or, worse, they engage in a political sleight of hand. They say job losses, rising mental-health problems, lack of money and a global downturn that will hit the poor severely are also down to Covid. ‘Covid-19 is giving rise to economic problems, too’, they occasionally say. No. We cannot allow this. It is not Covid that is destroying livelihoods and liberties – it is our societies’ historically unprecedented, ill-thought-through, contagion-like authoritarian response to Covid; it is lockdown fanaticism.

They need to take some responsibility. Covid can be excused; it’s a virus. The lockdown fanatics cannot be excused. Their extremism is hampering sensible government action, stymieing open public debate, and nurturing economic catastrophe. They must be held to account. More than that, they must be opposed. We need a return to reason, freedom and productivity. www.spiked-online.com/2020/05/08/lockdown-fanatics-scare-me-far-more-than-covid-19/