Oh puh-leeese. Now that Ian Thorpe has spilled the beans about being homosexual, you would think that he has just announced that he is the long-awaited Messiah. The MSM is going absolutely nutzo over the new revelations about the swimmer’s sexuality.

Those who reveal their homosexuality today are treated as being far greater than any war hero and far worthier of applause and recognition than any Nobel Prize laureate. It is incredible really. Up until recently almost everyone knew that this was a dangerous lifestyle which deserved no praise and promotion. 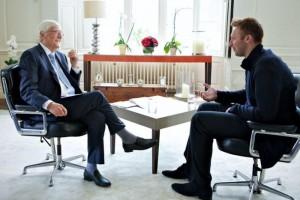 But now in our morally bankrupt world we have managed to turn vice into virtue, and virtue into vice. The only bad guys are now those who warn about what a dangerous and unhelpful lifestyle this actually is. The story goes like this:

After years of denial, swimming champion Ian Thorpe has revealed he is gay in an exclusive interview with Sir Michael Parkinson. The five-time Olympic gold medallist and Australia’s most successful Olympic athlete to date, has revealed his sexuality in an interview to be aired on Australian television on Sunday night.
According to Australian newspaper the Sunday Telegraph, Thorpe, 31, who retired from swimming in 2012, “confirms his sexuality” and “has bravely revealed he is gay” during a tell-all interview. A teaser clip released by Australia’s Network Ten shows Parkinson asking the swimmer: “You’ve always said that you’re not gay. Is all of that true?” The camera then shifts to an uncomfortable looking Thorpe, who contemplates his response.
Thorpe, known as the “Thorpedo” for his prowess in the swimming pool, broke 22 world records and won five Olympic gold medals. At the 2000 Sydney Olympics, he won three gold and two silver medals, making him the most successful athlete at the Games. He also won 10 gold medals at the Commonwealth Games.
The interview, which Parkinson has described as one of the best he has conducted, also details the swimmer’s battle with depression, drugs and alcohol, which caused him to check into a rehabilitation unit earlier this year. The revelations are dramatic particularly because Thorpe has always vehemently denied rumours of his homosexuality.

Um sorry, but I am not going to join all the brainless celebs and activists in swooning over this guy. There is nothing brave about coming out today. We are awash in all things homosexual, and homosexuality has been the flavour of the month now for at least the last dozen years.

The only ones who are brave today are those who dare to resist the homosexual juggernaut. They are the new pariahs and scorned outcasts in the West, and they will be treated savagely and with ugly fury by the militants and their fawning supporters in the media.

And rather ironically, but we have the perfect illustration of this appearing on the very same day. For daring to use a politically incorrect word, a media broadcaster is now being crucified. Many are calling for him to be sacked, all for the crime of actually saying something the pink mafia does not like. I refer of course to Brian Taylor and his remarks made about an AFL player:

Geelong star Harry Taylor has accepted Brian Taylor’s apology for calling him a “big poofter” on national TV, but says there is no place for such comments in football or society. Channel 7 is forcing commentator Taylor to undergo counselling over the slur, but despite calls for him to be sacked he will be back on air as normal next week. The Channel 7 commentator has apologised for the jibe he made in the lead-up to the game between Sydney and Carlton.

Crucify him! Off with his head! Banish him for life! At the very least, send him to the re-education camps where his thought crimes can be adequately dealt with. He is clearly the most evil, despicable and malevolent person out there, and action must be taken immediately! He must be severely punished for his crimes!

But back to Thorpe – the militant activists of course have been quick to chime in here, telling us what an “inspiration” his revelation will be to young people, and how it will “save lives”. Sorry, but just the opposite is true. It will tempt vulnerable and naive young people to embrace a lifestyle that we should wish on no one.

Given how dangerous it is, and how associated it is with all manner of problematic health outcomes, not least of which is HIV/AIDS, this is not going to save lives, but do the exact opposite – it will likely cut short even more lives. The documentation on what a high risk lifestyle this is, and the many health risks associated with it, is now well known (albeit fully covered up by the lamestream media).

So I for one am not going to applaud any of this. It is certainly nothing to cheer about. Like all such people, Thorpe needs help and prayer here, especially if he seeks to move out of the lifestyle. And this was the mainstream view of everyone until just recently. Consider just one quote from a few decades ago:

“Even in purely nonreligious terms, homosexuality represents a misuse of the sexual faculty and, in the words of one…educator, of ‘human construction.’ It is a pathetic little second-rate substitute for reality, a pitiable flight from life. As such it deserves fairness, compassion, understanding, and, when possible, treatment. But it deserves no encouragement, no glamorization, no rationalization, no fake status as a minority martyrdom…”

Yep, that was Time magazine no less in a piece from a 1966 issue. So all this perfectly illustrates my point that we now live in a completely topsy-turvy world, where formerly unthinkable lifestyles are now paraded and celebrated, and anyone who does not follow the PC agenda will be harshly dealt with by the thought police.

Today we celebrate a high-risk deathstyle, and we crucify anyone who does not fully go along with it. It seems Isaiah knew about our day when he said, “Woe to those who call evil good and good evil, who put darkness for light and light for darkness, who put bitter for sweet and sweet for bitter.” (Isaiah 5:20)